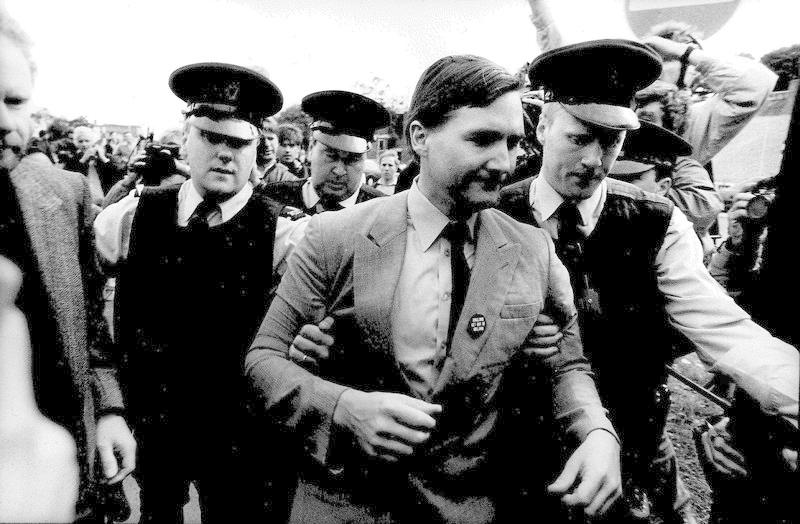 A leading American campaigner for Irish reunification has said the emergence of a previously classified British document is proof he was banned from entering the North in the 1980s because of an offer to engage with British Government officials and leading unionist politician-not because he supported the IRA campaign.

Martin Galvin has also revealed that when the exclusion order against him was eventually lifted in 1989, he was told of the decision by British agent within Sinn Fein and the IRA Denis Donaldson, later murdered by dissident republicans in a remote area of Donegal in 2006.

Martin Galvin was served an Exclusion Order in 1984 barring him from entering Northern Ireland.  At the time, he was publicity director of Northern Irish Aid (NORAID)- a NewYork based organisation founded at the outset of the Troubles in 1969.

NORAID was founded to raise money for the families of republican prisoners but became caught up in major controversy when its organisers were accused of using the funds to supply arms to the IRA.

The New York based lawyer last visited Derry around two weeks ago as part of a U.S. Ancient Order of Hibernian delegation. And, it was just before his arrival in Derry for the visit that he learned of the surfacing of the British document in question.

In August, 1983 Martin Galvin led a group of 80 Americans on a fact-finding tour of the North organised by Sinn Fein. The tour included a two-day tour of Derry.

The arrival of the U.S. delegation attracted major press coverage in Ireland and America. The visit also coincided with the annual anti-internment rallies after which British Minister Nicholas Scott, a close associate of Margaret Thatcher, issued a public statement saying he regretted not being given the opportunity to speak to the U.S. contingent and 'set them straight.'

Martin Galvin said: "We immediately replied that were still in the north and were willing and available to meet with the British official.

"But, Scott was immediately recalled back to London from Belfast and a statement was released that British officials did not speak to anyone affiliated with Irish Northern Aid, or who believed that IRA resistance to British rule at the time and in those circumstances was morally legitimate.

"However, Unioinist MP Martyn Smyth appeared with me on a UTV program and said our tour represented a blinkered view of the conflict because the delegation hadn't met with British officials or unionists."

The following year, Martin Galvin, by then editor of an Irish-American newspaper in New York, organised a second tour which this time consisted of 130 Americans. It was again planned to coincide with an anti-interment rally on August 12, 1984.

Martin Galvin continued: "On July 16, 1984 I wrote a letter from my office at the Irish People, offering the Secretary of State for Northern Ireland and unionist leaders an opportunity to speak to us at a mutually agreed time and venue. It was a genuine offer made in response to both Nicholas Scott's and Rev Smyth's public comments the year before."

However, the British response to the offer to talk was to have then Home Secretary Leon Brittan issue an Exclusion Order against Martin Galvin at Cabinet level on the eve of the American delegation's arrival in Ireland.

"It's been speculated that the ban was payback because I was in charge of American support for the hunger strikers in 1981. But, a pretext was also added that months before at the rededication of the United Irishmen Roddy McCorley monument in Toome I had made a fairly commonplace remark that I was glad there were still men and women who carried on in the spirit of Roddy McCorley to be free," Martin Galvin said.

However, the recent emergence of a previously classified Northern Ireland Office (NIO) memo dated July 25, 1984 makes no reference to an exclusion order nor any concerns about allegedly inflammatory remarks in support of the IRA campaign from Galvin.

The Exclusion Order against the American was however issued the next day-July 26, 1984.

The NIO memo, signed by a JM Lyon, states: "You may have seen that Martin Galvin had secured some publicity for his request to the Secretary of State and the Unionist parties for a meeting with the NORAID party when they visit Northern Ireland next month.

"I suggest the letter receive a short Private Secretary reply.

"I suggest Mr Barrie (Foreign and Commonwealth Office official) might inform Washington of this correspondence and let them know the terms of our reply when it has been sent.

"I suggest we do not ourselves issue the text to the press either here or in America, but should make it available if asked with the thought that this is a propaganda ploy at its most transparent.

"In view of the imminence of the visit, it would be helpful if colleagues could let me have any comments, by telephone inconvenient, by close of business on 26 July."

Martin Galvin said: "Instead of intimidating or silencing the delegation the ban had the opposite reaction. Sinn Fein leaders had learned of the ban and told me it was important that I defied it because it would highlight censorship.

"I agreed to defy the ban and I was photographed in Derry beside Martin McGuinness to prove I'd been in the North.

"When we went onto Belfast on August 12, the RUC had planned a brutal retaliation. Gerry Adams called me onto the platform to speak at the anti-internment rally the RUC immediately fired plastic bullets and baton charged a peaceful crowd. They murdered Sean Downes and injured many more.

"But, like Bloody Sunday, the number of cameras, journalists and witnesses meant that British violence couldn't be covered up."

The following year, 1985, Galvin again defied the ban and appeared in Derry once more carrying the coffin of an IRA member.

And, in August 1989 on the 20th anniversary of the arrival of British troops in Derry, Martin Galvin was arrested at Free Derry Corner whilst accompanied by Martin McGuinness.

After being held at Strand Road RUC barracks he was shipped to a military base in England before being deported to Washington on a British military aircraft.

"It after this incident that the British Government announced that the Exclusion Order was being withdrawn. Ironically, I was told of this by Denis Donaldson who had been sent to America and who was obviously targeting me."

Speaking of the 35-year-old episode, Martin Galvin told the Derry News: "The ban against me was simply one more of the countless examples of British officials imposing petty and arrogant policies behind some noble cover story and then being surprised that anyone would refuse to bow to their edicts.

"We were trying to show Americans what British rule was like for nationalists in the six counties.

"I think it's ironic that I was made aware of this British document just as I was traveling to Derry with another American delegation. When we met in the Guildhall with eight councillors and Deputy Mayor Derek Hussey, I referred to the memo and noted that the last time I brought an American delegation to the north and requested a meeting with the British and unionists I had been sent an Exclusion Order in reply."

CAPTION: Martin Galvin being arrested by the RUC at Free Derry Corner in 1989. The late Martin McGuinness can be seen on the fringe of the left hand side of the phoptograph.
ADVERTISEMENT - CONTINUE READING BELOW