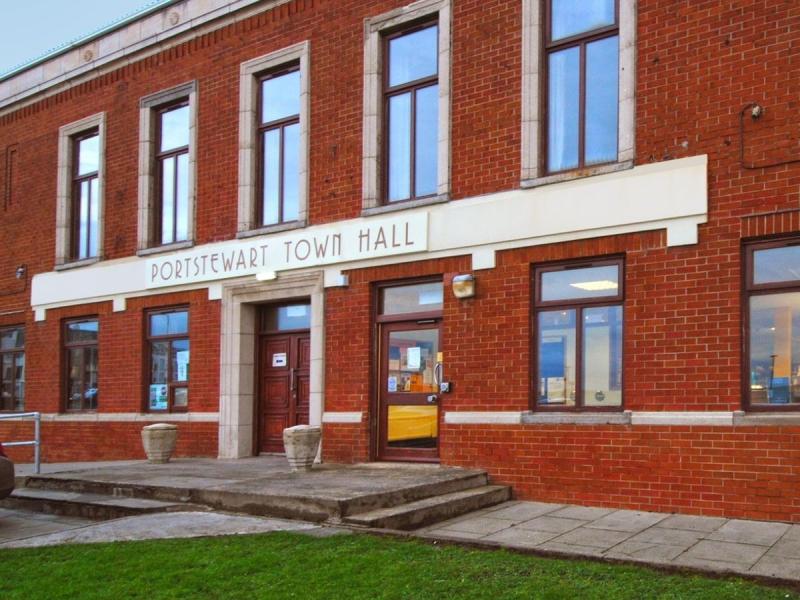 The owners of a County Derry town hall have said they are disappointed at how the building has been allowed to fall into disrepair during a lengthy lease to the local council.

Acting through their solicitor, the Montagu Estate have issued a statement expressing regret that Portstewart Town Hall had been subject to 'years of neglect' during its time under the control of Causeway Coast and Glens Borough Council.

The town hall sits on a number of sites provided by the Montagu Estate to the 'Portstewart townspeople', and the family have said much of the land had been 'abandoned' by those responsible for it.

"Ever since John Cromie named Portstewart in 1792 he and his successors, now the Montagu Estate, provided lands for specific amenities for the townspeople of Portstewart," they said.

"This seems to have been forgotten over the years.

"Our predecessors provided the Cromie Institute, land for the Warren Playing Fields, the Primary School, the Headland, the Crescent foreshore, the Harbour and other many other parcels of land some of which are now in dispute as they have been abandoned by those to whom they had been endowed.

"It is disappointing to us that the Town Hall has been allowed to fall into disrepair over so many years of neglect, causing the loss of this amenity to the townspeople of Portstewart that is sincerely felt by all."

Independent councillor for the area, Angela Mulholland, said the community had reached out to the Montagu estate to attempt to find a solution.

"The people of Portstewart are devastated at the prospect of losing our town hall," she said.

"We fully appreciate and share the disappointment and frustration felt by the Montagu family regarding Causeway Coast and Glens Borough Council's stewardship of the town hall.

"We, too,  feel that the Council have  not served as good custodians of Portstewart town hall, or  as good public servants of  the community of Portstewart.

"We have reached out to the  Montagu estate to try to find  a way to reach a positive resolution.

"We want to rally  the community to actively  engage in restoring our town  hall and the other areas that have been left neglected for so long."

When contacted, Causeway Coast and Glens Borough Council said they intended to issue a statement on the town hall next week.

After the Special Council meeting where they approved the hand over after seeking legal advice, Mayor Richard Holmes said the community were 'free to negotiate' with the Montagu Estate.

”The ownership of Portstewart Town Hall has been under detailed consideration by Council for over two years,” he said.

“In March 2021, the Council made a decision which was not challenged using any of the normal channels, either call-in or rescinding motion.

“That decision was to acknowledge the Montagu Estate’s Notice to Quit and the nub of the issue here is the ownership of the building.

“While the council is progressing with the hand back of the building, the community is free to negotiate with the Montagu Estate.

“Preliminary work to establish the need for community space in Portstewart has already begun as proposed by council members."

The Mayor said the community were ‘free to negotiate’ with the owners over its use.
ADVERTISEMENT - CONTINUE READING BELOW