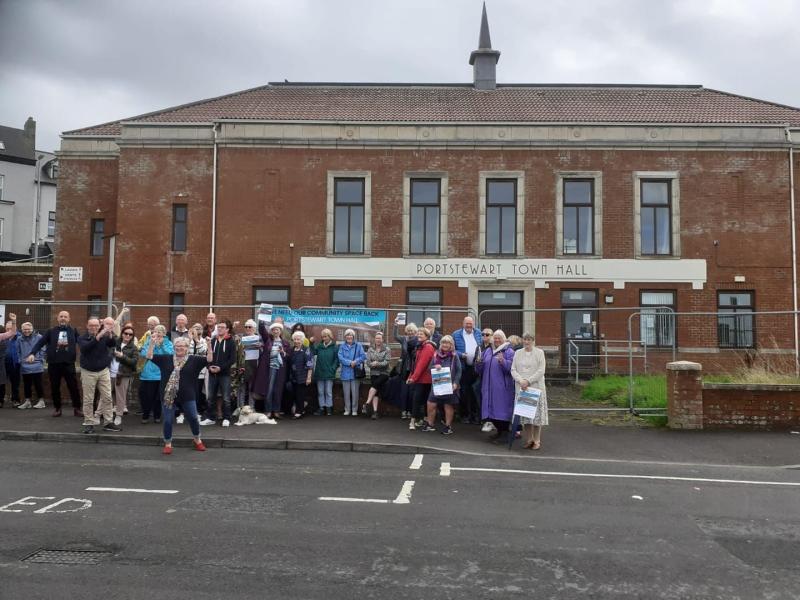 A County Derry community group have appealed to the Department for Communities (DfC) to intervene after a local council opted to hand ownership of the town hall back to the original owners.

Last week, a confidential meeting of Causeway Coast and Glens Borough Council was held to discuss legal advice around Portstewart Town Hall, with a decision to hand it back to original owners rubber-stamped.

The Montagu Estate served the Council with Notice To Quit in 2019, and in subsequent meetings, the Council voted to hand ownership of the building back to the original owners.

Portstewart Community Association had expressed their disappointment at the decision, and have now called on Minister for Communities, Deirdre Hargey, to intervene in the handover.

In a letter to Council CEO David Jackson, the Association said they were concerned the Council had not conducted due diligence with regard to the ownership of the town hall.

"Every council has a duty to apply to the Department for Communities where the full council has ratified a decision to dispose of land at less than best price," they said.

"If even a possibility exists that CCAG Borough Council does own the land, the council has an obligation to examine the matter exhaustively before handing over any land.

"As yet, we have not been provided with any proof of the Montagu Estate’s claim of ownership.

"We are aware that CCAG Borough Council does not hold the deeds for the site but we are not aware that any other party has produced a copy of deeds for it.

"PCA requests that CCAG Borough Council, the Montagu estate and the Department for Communities work together to agree and facilitate a community asset transfer to the people of Portstewart.

"We believe that this proposal is the best compromise that meets the wishes of all interested parties and retains the building in public ownership in perpetuity.

"We feel disappointed by the Council’s actions and decisions regarding this matter to date, but we are keen to continue to work with the Council to reach a solution that retains the town hall for the people of Portstewart, and rebuilds our relationship with our Council, for the benefit of all."

At last night's full council meeting, Independent councillor Angela Mulholland attempted to speak on rumours the Council had agreed to hand over the keys to the building to the Montagu Estate this morning (Wednesday).

Mayor Cllr Richard Holmes did not allow Cllr Mulholland to finish her remarks, saying the only discussion permitted on committee meeting minutes was on matters of accuracy.

"Sorry, we're dealing with the accuracy of the minutes here, not the meeting, so if there's a change you want to make, propose it," he said.

"You can comment at the relative committee all you like, but this is for accuracy. It's the same for all of them."

Got an opinion on this story? Let us know. Email your views to news@derrynow.com.

The Council will hold a confidential meeting tonight to discuss legal advice on the hall's ownership.
ADVERTISEMENT - CONTINUE READING BELOW