‘I'm as much to blame as anyone else’ - Declan Devine 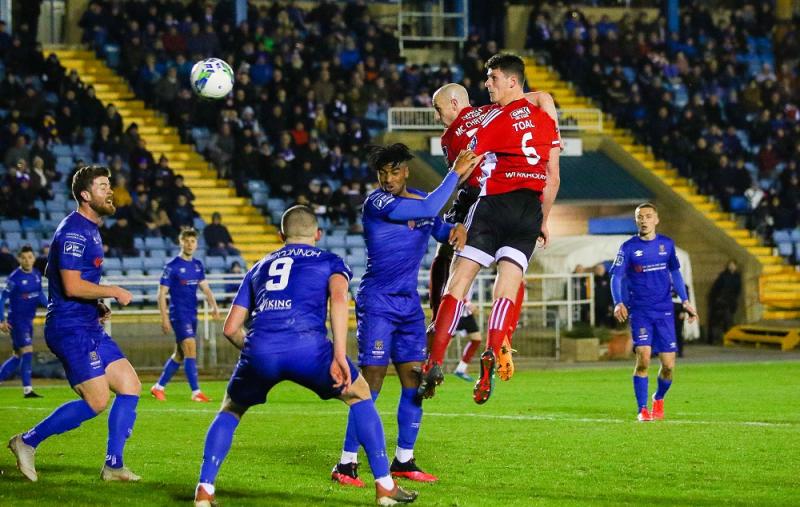 Man of the match Mark McChrystal who was making only his second start and third appearance overall since returning to the club. Photo: Kevin Moore

It promises to be a week of self-reflection at the Brandywell after Declan Devine admitted that neither he nor his players were good enough in the weekend defeat to Waterford.
It is now just four points from four league games for the Candystripes after falling to their second defeat of the season, this despite leading at the RSC thanks to another goal from Stepohen Mallon.
A last gasp wonder-strike from Waterford substitute Shane Griffin devastated Derry, but the manager was honest in his assessment afterwards, insisting the home side deserved to win .
“We were poor and didn't perform to the levels that we're capable of,” he said.
“I'll reflect on it and take a good look at myself because those types of performances are not what we are about. We want to finish games strongly and we have conceded two goals, the last kick of the first half and the last kick of the second half so our game management was poor and our overall quality on the night has to be better.
“I'm disappointed in the performance but ultimately I'm even more disappointed in the result.”
Mallon's first half goal looked to have given City a foothold in the game on Friday, but it was a brief moment of positivity on an otherwise disappointing night for the visitors.
“We didn't build on that,” Devine admitted. “We didn't have any real stranglehold on the game for the whole 90 minutes. We had a wee period maybe in the second half for ten minutes when we were okay but generally right throughout the course of the game we were disappointing from start to finish.
"On the back of a good positive result last week I thought we had more in us in terms of our character and ability on the ball. The pitch was difficult but there's no excuses.”
Both Waterford goals were spectacular efforts, but Devine was more concerned about his team's inability to manage the game at key moments in both halves.
“When you're away from home and there's couple of minutes left you've got to make sure you come away from something,” he continued.
“They were two good goals. The first one took a deflection off Eoin Toal's thigh, the second one we have got to get out and close the ball down a bit quicker. Our game management was the disappointing thing.
“Sometimes you can be disappointing and not play that well and still dig out a draw but we didn't have the intelligence to see out the game and pick up a point.

Reaction
Meanwhile, Devine will talk to striker Tim Nilsen about his reaction to his substitution during Friday night's game. The striker, who has yet to score for Derry City, appeared to punch the dug-out in frustration after being replaced by Adam Liddle before exchanging words with Kevin Deery.
“I'm very disappointed because at the end of the day we all pull in the same direction here so if he's not too happy then we'll look at the game, and we'll go through it and we'll speak about it during the week,” the manager explained.
"It's up to Tim to look at the game and have a reflection on his own performance. We ain't in the habit of disrespecting the people who come on the pitch. We've got a lot of good players at the club and if someone isn't happy then come and see me."