Derry City's Declan Devine: "We still have a job to do"

There is no basking in a job well done for Declan Devine who not only wants European football secured but wants Derry City to nick third place from Bohemians in the final week of the season. 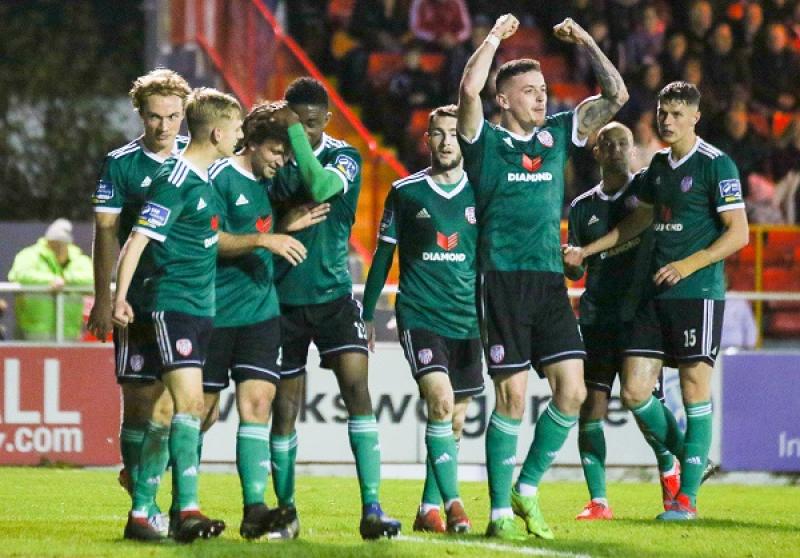 CAPTAIN FANTASTIC... Barry McNamee is congratulated by his team mates after scoring what proved to be the winning goal against Sligo Rovers on Saturday night. The win means that the Candy Stripes need

There is no basking in a job well done for Declan Devine who not only wants European football secured but wants Derry City to nick third place from Bohemians in the final week of the season.
Following Saturday’s victory over Sligo Rovers, the Candy Stripes need just one point from their final two games to bring Europa League football back the Brandywell, but the manager is aiming high. Devine wants it all, starting with a victory over St. Patrick’s Athletic at home tomorrow night.
“There will be a lot of twists and turns for us to not make Europe but we have got to go about our jobs,” he said.
“We have still third place to play for. It was interesting watching RTE; everyone was congratulating Bohemians on third place. We have two games to play and if we can win them we can push for third as well and if we can do that, to go from third bottom to third top in a short period of time, then it would be a magnificent achievement.
“There are no guarantees yet because we have a very difficult game on Tuesday.
“We really need the Brandywell filled. We need the crowd to come on Tuesday night to get us across the line and help us.
“The support we had in Sligo was magnificent and if we can get the Brandywell filled or anywhere near where it’s been recently then it will be a magnificent lift for the players leading into the last game versus Finn Harps.”
City’s victory over Sligo on Saturday was significant, especially with St. Pat’s coming to the Brandywell hoping to spoil City’s European party.
“It was a huge win coming from behind,” Devine agreed.
“We weren’t at our best on a difficult pitch and we weren’t free-flowing at all but we definitely ground out the win.
“We worked extremely hard and showed tremendous character to take the three points, especially when the pressure was on.
“We were coming here having not had a game for 15 days and everybody was celebrating in Dublin having qualified for Europe and we had to make sure that we did our business. We aren’t over the line yet but we are in a healthy place heading into the last two games.”

City’s away record this season is vastly improved on last year’s, with only 19 goals conceded on the road compared to 45 in 2018.
“It is a big difference but we want to get better than that,” Devine continued.
“No matter what happens this year we have got to strive to get better next year.
“It’s not a short-term plan here over ten months; we have got to be looking at improving all aspects of our game, all aspects of our club.
“We have a lot of young players at our club and we want to help them grow, we want to make sure we grow the club.
“We are very, very proud of what they have put in so far but there’s definitely no celebrating in there at the minute because we have another big game come Tuesday.
“If we can finish it off Tuesday and qualify for Europe and then have a go at maybe finishing third on Friday then for me it will be a magnificent year.”