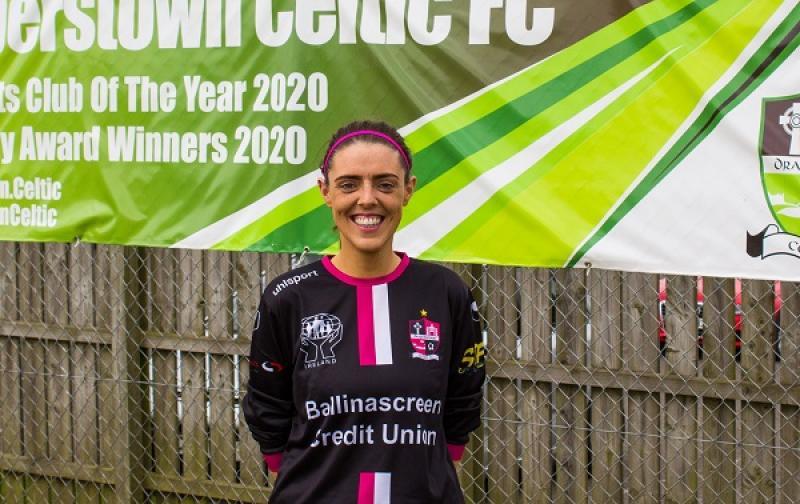 Her camogie stick may be 10 years in retirement, but Caoimhe Shaw's new beginning to her sporting career has left her buzzing.

Sport was put on the back burner as university and life took over. Then, earlier this year, a spark arrived in the form of Marissa Callaghan's photo in the County Derry Post.

The Northern Ireland women's captain was helping out at a first ever coaching session at Draperstown Celtic's senior girls team, the DC Diamonds, who were appealing for new recruits.

“I just messaged them on Facebook and it started from there,” Caoimhe points out.

That was just four months ago, but it took her back to her days at home in Lavey, watching Liverpool on the telly before going out in the garden as the goalkeeper for her brothers Olcan and Oisin.

“I saved more than they'd like to admit,” she jokes. Now, Caoimhe is the 'false 9' in DC's team, mixing between leading the attack and dropping into midfield.

Growing up, any chance she got, soccer was on the telly. At the start, male role models dominated sport. As a fanatical Liverpool fan, Michael Owen was her favourite.

Caoimhe would tune into the annual live coverage of the Women's FA Cup and recalls Arsenal being at the top of the tree, with Irish goalkeeper Emma Byrne part of their team. It got her thinking of how someone local could go right to the top.

“Then you now now at people like Alex Scott and where she has gone,” Caoimhe added of the for the former Gunners' player who spent a time playing in Boston and is now working as a pundit on Match of the Day.

Female role models are emerging over the last 'five or six' years on television. Magherafelt's Simone Magill has put the locality on the map with the Northern Ireland team managed by Maghera man Kenny Shiels.

Their qualification for the European Finals had Caoimhe's friends enquiring about tickets and the chances to making the trip to London.

“My phone was buzzing,” she said. “It has changed so much. Girls I know that wouldn't have been interested in football. they are like 'we'll go to it'. Everyone around here are talking about Simone Magill, it is not all about the male players. Young ones are having jersies with women's names on the back of their jersies.”

Things are changing. Katie Mullan flew the flag for local sport with the Irish hockey team at the Olympic games in Tokyo. Closer to home, Aine McAllister turns out for both Derry ladies footballers and camogs, one of the rare GAA dual players. People who can inspire others.

“That's the big thing,” Caoimhe says about youngster seeing and reading about their idols.

“The more coverage it is getting, the more a girl will sit up and take notice,” she stresses. “They are saying 'if they can do, I can do it' and they are going out to training. The more you see it, the more you can be.”

Now, having made the decision to throw her hat in with the DC Diamonds, Caoimhe has bit that sporting bug again. From being on the outside and not knowing anyone, she is thoroughly part of the DC sporting family;

“They couldn't have been nicer,” she adds. And it's not all about training, playing and winning. There is the togetherness side of sport.

“For me, it is finally doing something that I have always wanted to do after all these years.

“I am 30 now and I feel I have always wanted to do it and I have never got the chance to do it. Now whenever I am coming home from training buzzing...thinking if only I could've done this 15 years ago.”

On the question of girls dropping out of sport quicker than boys, in their early teens, Caoimhe puts a lot of it down to friendship groups.

“A lot of girls will drop off if their friends aren't doing it, they don't want to try and new team on their own,” she said.

“Boys get struck in and within 10 minutes they are all friends. For girls it is different and it does play big part.”

That's where DC have a strong base, with huge numbers of underage at the Sunday morning coaching sessions.

The problem arises when it comes to games, with few dedicated girls' teams. Last week the Diamonds' seniors hosted Castlecaulfield in their first 11-a-side game and are due to return the favour later in the season. There is a game in Bangor pencilled in over the coming weeks.

“Hopefully over time, more teams will appear in local places and get more competition among everybody,” Caoimhe hopes.

What would she tell the younger version of herself, back in her teens with a soccer team on her doorstep? As well as the enjoyment it brings, there is now a career path for young girls getting involved in soccer, playing and coaching. An avenue previously not open.

“Get involved, especially with DC, I would definitely say get involved. They couldn't have been more welcoming or nicer to me.”

There is a famous saying 'Diamonds are forever' and Draperstown Celtic have created something that will change local sport forever.