A phone call from Glenn Ross put her into the limelight 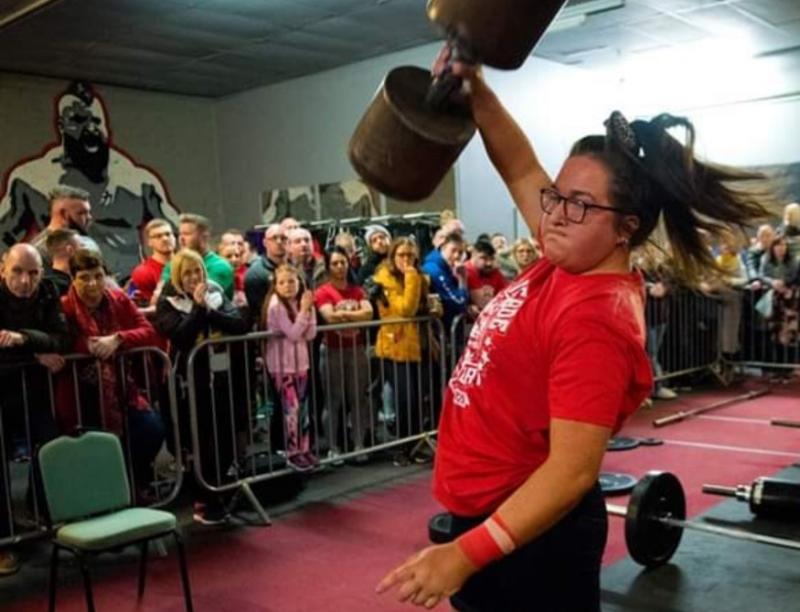 It has always been sport for Gemma Moore, right from the start. Gaelic football is woven into the fabric of her native Craigbane, nestled deep in the Derry countryside.

From the time she could walk, it was all about the ball and going to the pitch. When the sporting bug takes root, it beds deep.

Last year, the shape of the ball changed when her aunt Ciara got her on board with City of Derry rugby club.

But, a trip to the gym was the biggest game-changer. On the face of it, the motive was about losing weight and getting into a routine.

It didn't take long for her raw strength to shine like a beacon on the night, lighting up a new direction. She didn't know it at the time, but the 25 year-old had stepped aboard a new pathway, that of 'strongman' that took her to the UK's Strongest Women event in Bangor last weekend.

Before Christmas, just seven months into her new sport, Gemma set a 265kg Dead-lift record. It let her see the potential and after linking up with trainer Matthew McKeegan, of MK Strength and Fitness in Derry, she hasn't looked back.

Moore's progress didn't go unnoticed with five-time UK Strongman champion Glenn Ross, who invited her as one of 16 competitors to Bangor's showpiece event.

“I was training when he rang...I only got invited three weeks ago,” Gemma pointed out, as she relaxed on Friday, looking forward to the event.

“This is their first ever female show and I am the youngest at 25, they are all older and have been at the sport for 10 years. Even to get invited this year, I am delighted, but it's in at the deep end and you have to sink or swim.”

Gemma qualified for Sunday's final and was 'delighted' to finish in 12th place in a field of 16.

Saturday's four-event itinerary involved a pole push, the first time it has been done in 'about 12 years'. It's essentially the opposite of tug of war.

On top of a 200 kg brick dead-lift, pitting yourself against a 100 kg sandbag and throwing 85kg kegs over a bar.

Sunday brought the iconic lorry pull, flipping a 100 kg tyre, the 'stones of strength' and the log lift.

To the outsider, eight stages of pain. But not for Gemma.

“They are all alright,” Gemma admits. “My struggle is getting them lifted and getting a good grip of them, but once you are moving it is all about grabbing them and going as far as you can.”

After starting last July, Gemma was involved in log and dead lift competitions until her first event at Ireland's Strongest Woman this June. And now, she has the buzz

“It is really tough, but the thing I love about strongwomen is that you don't know what is coming next in the competition, there is such a variety.”

Gemma trains in Derry, while Maghera's Dolores McGuckin – another local strongwoman, got into the sport through a gym in Upperlands.

Not everywhere caters for it, but Gemma has noticed another three getting involved. She has been contacted by numerous others, enquiring and thinking of also taking the plunge into something new.

“I went along to Focus (her Gym) to try and lose weight at the start and when somebody said I'd be suited to it (strongwoman) I said: 'hardly'. I tried it and I have been at it ever since,” she points out.

It's a five days a week programme of training, with the schedule dependent on the time of season and the proximity of competitions.

“It depends what you are preparing for,” Gemma explains. “You'll have a dead-lift day and then all your accessories, a pressing day, with an axle, dumbbell or a log. You have it all, there is plenty of variety.”

Aside from all the lifting, there is still the target of 15,000 daily steps to be met and her cardio work. When she is mixing lifting with her rugby season, this is never a problem with the perfect balance.

“At the minute I am on a break from the rugby,” she adds of her preparation for the British championships in England next month.

“It is too high a risk of injury with the rugby, as much as I'd like to play.”

But which sport comes first?

“Strongwoman...without a doubt,” comes Gemma's swift response. “It is not even a question any more.”

The rugby is parked for now and Craigbane GAA team will have to plan without her. For now.

PODCAST - The Inside Track - Maghera strongwoman Dolores McGuckin, John O'Dwyer steps down and more insight to the Derry club scene