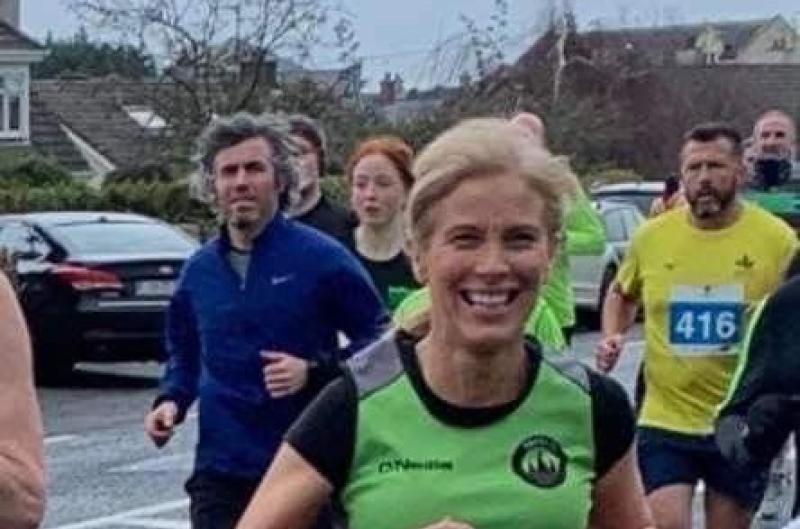 As part of our Women in Sport feature in the County Derry Post, we caught up with local runner Sheila McCloy to hear about her origin in sport, how she began running and her thoughts on developing female sport.

Michael McMullan: What is your earliest memory of sport?
Sheila McCloy: The really earliest memories of sport stem back to my school days where I played on the school netball team as well as gymnastics.

M McM: Have you always been involved in running, or was that something that you got involved in later?
S McC: I only became involved in running in September 2015 after the birth of my twin girls when I joined a couch to 5k programme led by Francis Purvis. A good running friend encouraged me to take up running  as she felt I needed some ‘me’ time.

M McM: Who was your sporting idol growing up?
S McC: My earliest sporting idols came from the world of tennis and athletics. Wimbledon was a firm favourite every summer. Martina Navratilova and Boris Becker  to name a few. Also, at a young age, I really  enjoyed watching sprinting in particular and was amazed by Flo Jo competing in the Olympics.

M McM: How important are role models for encouraging young girls to get involved in sport?
S McC: I feel female role models are important to encourage young girls to partake in sporting activities. You only have to look at the ever increasing attendance at the Ladies Gaelic Games, the recent success of Kellie Harrington in boxing, as well as the increased coverage of national and international competitions to see a wide and diverse range of sporting role models.

M McM: Looking at yourself, how important is sport in your own life?
S McC: Sport is extremely important in my life. It keeps me happy and healthy. Also I feel it sets a good example to my five children. It  is a great social outlet for me as I have made some of the best friends during the last six years. I also have the utmost respect for Tafelta AC coach  Francis Purvis. He has put running on the map in the Mid Ulster Area, and has introduced many females of all ages and ability to running over the years.

M McM: What has been the highlight of your career so far?
S McC: My biggest sporting  achievement has to be completing my first marathon in Dublin in October 2019. I didn’t get the time that I had hoped for on the day and therefore feel I have a score to settle in that regard. Fingers crossed for October 22.

M McM: And, what about the biggest disappointment or the toughest time you have experienced?
S McC: The toughest time in sport had to be the initial lockdown due to Covid. I really missed training and had to learn to adapt to individual training and complete long solo Sunday miles. However our coach kept us motivated by introducing virtual training with league tables to create a bit of competition within the group.

M McM: When you mention training, how often do you train?
S McC: I train six days a week with three of these being on the track at Meadowbank Sports Arena. The training generally consists of speed sessions, easy recovery miles and long Sunday runs.

M McM: Looking forward, what are you targeting in the short and long term?
S McC: To generally reduce my times over all distances and to complete another marathon.

M McM: On the topic of sport and how governing bodies organise themselves, what can they do to help more female participation?
S McC: Looking back from my own experience, I feel it is very important for sporting authorities to get children to increase their participation in sport from a young age . This can only lead to more confident, happier young ladies as they move into their adult sporting life.

M McM: What advice would you give them to get involved in running...or indeed any sport?
S McC: My advice would be to go have a chat with your local running club coaches. Perhaps attend a training session and consider starting a couch to 5k programme. In our club recently, we have had young girls with parents in the club attending training sessions. It is great to see how their confidence and running has improved as a result.

M McM: Is there anything you feel is relevant to sport and involvement.
S McC: As a woman who was introduced to running late on in life, my only regret with regards to sport is not getting involved in running at a much younger age.
I am also a member of Purvis Running, a fantastic group who cater for all abilities. The training structure and expertise that the coaches have to offer makes me excited with regards to my future running goals. This group and the athletes who make up Tafelta AC are a great bunch of people who share a common love for running.
For any local ladies who are considering thinking of starting to run. Purvis Running  in conjunction with Tafelta Ac is starting a couch to 5k.
The programme begins on Monday August 30, ending eight weeks later with graduation. Sessions will take place at Meadowbank Sports Arena on a Monday (6.00pm) and Saturday (10.15). It costs £1 per session.