The Derry City captaincy, vacated by Barry McNamee, is up for grabs to any player who wants to come and take it 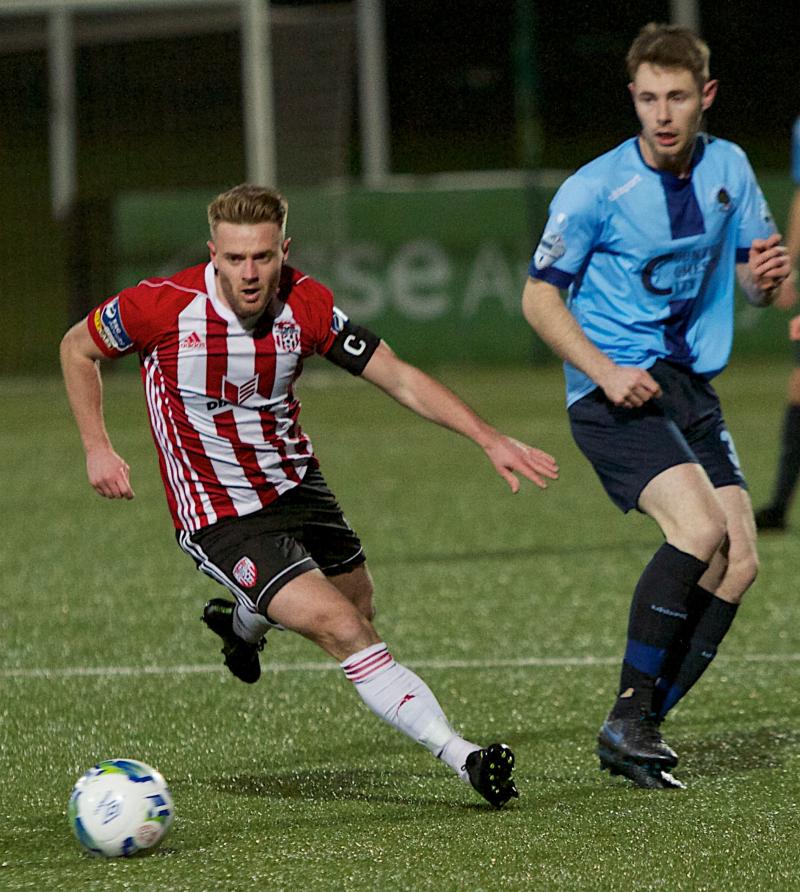 The Derry City captaincy, vacated by Barry McNamee, is up for grabs to any player who wants to come and take it.
That is the view of City assistant manager Kevin Deery, who said that manager Declan Devine and his staff have still to make a decision on who will lead the team for the 2020 season, and are in no rush as yet to make a decision.
Midfielder Conor Clifford wore the captain's armband against Institute in Tuesday night's Billy Kee Memorial Cup victory over Institute at the Brandywell. Clifford is one of six new signings so far, and with more arrivals expected, Deery admitted the decision to name a club captain has been put on hold.
“It’s petty up in the air at the minute,” he said. “We’re exploring different avenues and we want people to really make up our minds for us. We’re in no jury, absolutely. We have some good leaders and whenever we go 2-0 up or 3-1 up we probably need to have a chat about seeing the game out and people leading the game throughout instead of coming from the sidelines all the time.
“I feel we have signed enough experienced players this year and they need to take leadership. The group is new, we are only together three and a half weeks so we can’t expect miracles this early in but we need leadership when we’re in good positions in games.”
If Tuesday's game confirmed one thing for Devine and his staff, it is that City need competition defensively with 'Stute's second half fight back highlighting some flaws in City's back line.
“We know we need another wee bit of competition in the squad, especially defensively in the middle of the back four,” Deery agreed. “Eoin and Ally have been absolutely great for us last year but it’s a new season so we need to get competition in and drive it on a wee bit.
“That’s our thinking at the minute – we have a couple of options in the pipeline that we are trying to explore and get one or two more defensive players in. Competition is healthy so we just want to get the group tight now.
“We have a training camp next week so and we’ll look forward to getting good quality work in down there and hopefully our squad is a wee bit stronger again.”
Friday's scheduled friendly with Portadown has been postponed but City will travel to Dublin for a training camp next week, and Deery admits he would not be surprised if there are further new faces in the squad by then.
“We have the champions around the corner who are ruthless at times so you can’t really fall into that mindset of giving away soft goals. The boys have been a dream in pre-season so maybe it was a bit of fatigue after a hard session the day before – you have to take all these things into consideration and not be too hard on them, but we definitely need to work on some defensive stuff after giving those goals away.”

McCready leaves 'Stute
Meanwhile, Joe McCready said his farewells to Institute on Tuesday night after agreeing a two and a half year deal with Ballymena United.
McCready was 'Stute's top scorer this season with 10 goals in all competitions, and his loss will be a huge blow to the club in their fight against relegation from the Danske Bank Premiership this season.
The club thanked McCready for his service, saying: "Institute Football Club can confirm that Joe McCready has signed for Ballymena United. The Board would like to thank Joe for his contribution and commitment to Institute and we wish Joe every success as he continues on his football journey.”