Sean Brady's side are flying high in the league 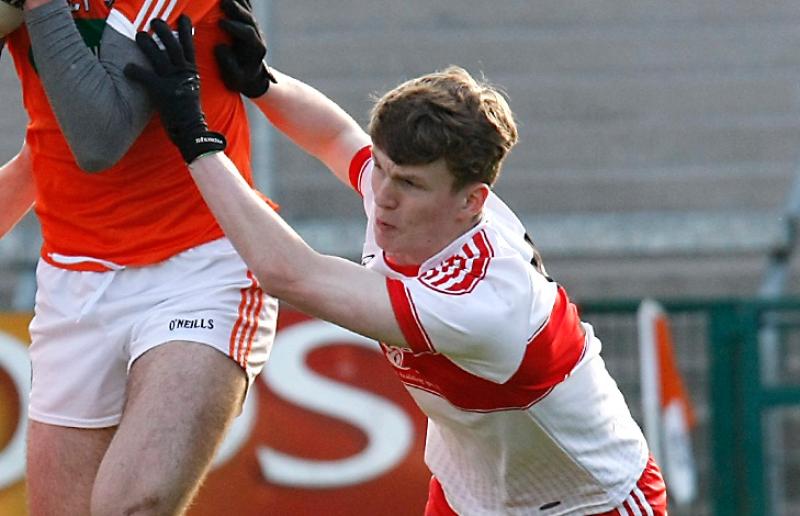 A slick moving and very fit Drumsurn team turned on the style at a breezy Billy Doran Park to pick up a third win of the season.

Drumsurn re-jigged their team from last week with Dara Rafferty a powerhouse at full back breaking up ‘Dawson attacks with his turnovers.

Turnovers were once a term used in baking, but now it is an integral part of Gaelic football. Drumsurn had loads of them.

While Castledawson tended to play their football up the middle, the locals used the wings to great effect and were winning virtually all their own kick-outs.

Stephen Harbinson’s deliveries both against and with the wind and was key to their 14-point win which in no way flattered them.

The stiff breeze which blew from end to end had a big bearing on the game. Despite playing with the elements, the visitors trailed by 1-6 to 1-5 at half time.

The second half was pretty much one way traffic, with Drumsurn adding another 3-9 to just 1-2 in return.

Tiarnán McHugh was instrumental in Drumsurn’s first half display. In the second half, Ciaran Mullan - an All-Ireland minor winner with Derry 19 years ago - conducted the orchestra, as well as scoring 1-3.

The switch of Tiarnan Woods to an attacking role has been a revelation. The former Derry minor full back plundered 2-3 in this game.

The 'Dawson, with a much changed team from last year, looked sluggish and laboured in their movements. All too often their intended pass landed in Drumsurn hands and their defence had no answer to the Drumsurn inside forward line of Woods, Rafferty and Mullan who racked up 3-7 between them.

Three Aidan Keenan points had Castledawson 0-3 to 0-1 in front after just eight minutes. With McHugh winning a lot of ball and using it well, Sean Brady's men got the next four scores to lead 0-5 to 0-4 at the first water break

On the resumption Shea McKenna took a Rian Connery pass and shot low past Harbinson for his goal of the season and saw his side take a two-point lead.

Drumsurn quickly took control again with a point from Woods. Two minutes later the corner forward ran on to a Ciaran Mullan pass over the ‘Dawson cover to slip the ball past Aidan McLaughin.

On the cusp of half time Niall McNicholl pointed a free to leave his team just one behind.

If anything the breeze got stronger and a brace of points from Woods and Shea Murray left three between the teams after two second half minutes.

Castledawson fluffed two scoreable frees and they were really up against it when Ciaran ‘Banty’ Mullan and his cousin Tiarnan Woods made the score 1-11 to 1-5.

Midway through the second half Rian Connery landed a massive free into the wind and between the posts. Another Ciaran Mullan point left Drumsurn 1-12 to 1-6 in front at the second water break.

On the resumption, substitute Harry Foster stretched the home lead out to seven. Ten minutes from the end it was all over as Woods and McHugh played in Ciaran Mullan and the veteran calmly slotted the ball past keeper McLaughlin for a 2-13 to 1-7 lead.

The energetic Ruairi Rafferty got his name on the score sheet as the gap widened. In the final two minutes Woods and McHugh bagged goals as the Castledawson defence fell apart.