A crunch game for both teams 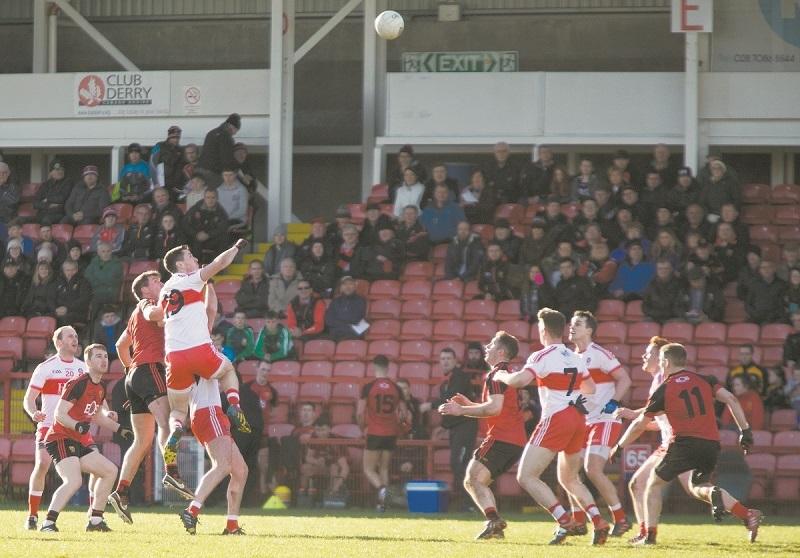 Action from Down's win over Derry in Celtic Park during the 2017 season. (Pic: Tom Heaney)

When the fixture computer churned out this tie, it was filed in the crucial category in terms of Derry's promotion bid.

The school of thought, in most quarters, had already banked on two points at home to Leitrim. In the wake of last weekend's draw, the trip to Páirc Esler was billed as a make or break for Derry's brittle confidence.

“It was always going to be huge,” said Rory Gallagher in his post-game interview.

“I see very few leagues that run in straight lines. It's up and down, we don't know what is going to happen in the other games tomorrow (Sunday). We know if we won by a point or by 10, we'd have to dig our heels and get ready for Newry.”

Then came the news of Down dropping a point to 14 man Tipperary in Clonmel. It was a slight source of redemption but it rams home the minefield Rory Gallagher is set to navigate Derry through over the next few months.

Derry would almost certainly have had eyes and ears in Tipperary on Sunday. It was a similar conclusion. Down needed points from goalkeeper Rory Burns (45) and Owen McCabe salvage a draw.

“We weren’t playing particularly well and I couldn’t actually see how we were going to get an awful lot more,” Down manager Paddy Tally told Tipperary Live.

“That match today was very difficult and I think it was a fair enough result.”

The teams this weekend bare no resemblance from the last league meeting, a 2017 clash at Celtic Park with the Mourne-men coming through on a 1-15 to 1-7 margin.

Of Derry's team, only Niall Keenan, Carlus McWilliams and Ryan Bell were in action on Saturday night, while Gavin O'Neill came off the bench.

For Down, they have five survivors. Ryan McAleenan, Darren O’Hagan, Niall Donnelly, Conor Maginn and Barry O’Hagan – who scored three points in that win over Derry – were in action in their draw with Tipp.

In terms of the Derry's walking wounded, they may not be that much change. The treatment table this week will tell a truer story.

Karl McKaigue's long-term ankle injury will be a huge blow and it could leave Conor McCluskey with the marking job on Donal O'Hare this weekend.

Padraig Cassidy's ability to break through the lines was a loss on Saturday evening but Gallagher rated him as not being 'far away' from a return. 'Tad' fell into the same category as Niall Loughlin, who hasn't played since Derry's championship defeat to Mayo in Castlebar under Damian Barton in 2017.

Shane McGuigan's hamstring injury meant he wasn't risked from the outset and in absence of any adverse reaction, he will be a massive boost this weekend.

“Niall and Shane would be massive additions up front and hopefully Paudie Tad as well,” Gallagher stated of his attacking options.

The Derry boss may have to plan without Ben McCarron, who sustained an injury in a mid-week university fresher game.

The possession won from Derry's kick-out was a positive from Saturday evening but it wasn't enough.

Outside of Ryan Bell and Ben McCarron, everyone else hugs behind the 45. In a packed middle third, Derry began with breaks from deep. It worked to a degree. But once passes started to go astray, they were punished and the age old lateral approach returned.

It wasn't until Gavin O'Neill, Chrissy McKaigue and Liam McGoldrick began to break out before half-time, that they got any sort of joy.

Paddy Tally was in the Derry camp under Brian McIver's tenure and could use his inside knowledge to stifle them on Saturday evening. On the face of it, their low scoring battle last weekend would suggest a turgid affair this weekend.

The constant from Rory Gallagher's post game interview last weekend would suggest that possession will be nine tenths of the law in the Derry camp.

Giving the ball away is criminal with how they are set-up.

“I thought that was reflective of the way we were throughout the game. I'm sure we gave the ball away 20 times and a lot of it very carelessly,” he said, of the last two attacks when they had enough ball to win the game.

A draw was a poor result last weekend. A win in Newry would be redemption but it could be another share of the spoils.

ALSO - A player by player look at Derry's draw with Leitrim.  Click here...