Derry draw opening game of league at home to Leitrim

Here is how the Derry players performed 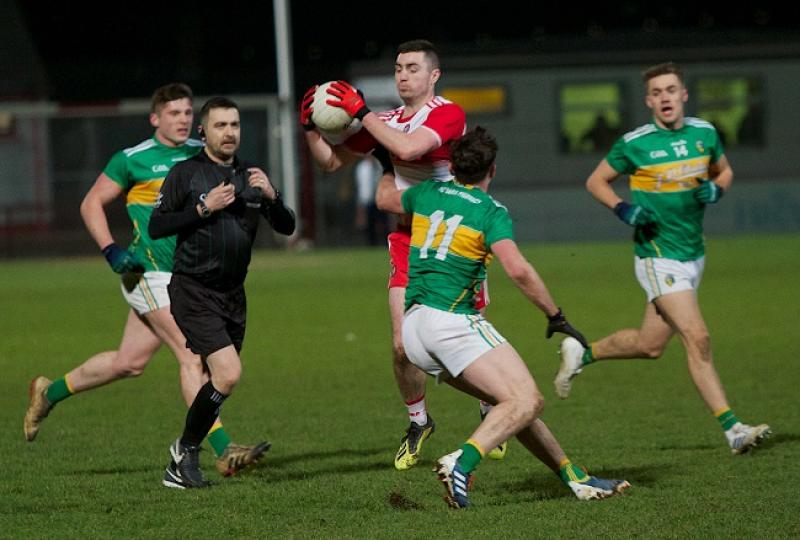 Here is how the Derry players performed.

O Lynch – Kicked well for much of the game on his league debut. Was punished for a short kick-out that led to a score and his unconvincing punch resulted in Leitrim's goal

L McGoldrick – Battled well but couldn't keep a lid on Keith Beirne but his runs forward helped drive Derry back into the game before half-time.

B Rogers – Conceded possession to Shane Moran in the first-half. Faired better in the second-half with some unselfish runs forward. Caught in possession in Derry's last attack.

P McGrogan – Started off on Beirne where he struggled before moving onto Moran at the break. His interception prevented a second Leitrim goal and he got forward as the game went on.

C McKaigue – Caught out of position when Leitrim hit Derry on the break early on. Led by example the first-half moved on. Won a vital 50-50 ball leading to a score and kicked his side into an interval lead.

C McCluskey – Conceded a free to Darragh Rooney after McGuigan's goal but overall had a sound game. Got forward when he could in the first-half and defended with courage in the second.

C Doherty – Was involved in a lot of Derry's breaks from defence including McFaul's opener. On the flip side, his sloppy pass in the first-half was punished at the end of a Leitrim breakaway.

G O'Neill – His first outing of the season. Did a lot of spadework in Derry's battle back from five points down and was involved in Emmett Bradley's goal.

C McFaul – Won the duel with Oisin McCaffrey. His appetite for possession kept Derry in the game. He kicked both the opening point and the equaliser.

E Bradley – His finish for the goal was a cracker and he showed well as a kick-out option. He was central to Derry's rally in the first-half but guilty of two missed chances he'd usually take.

D Tallon – The Glen man played in a ball carrier role, between midfield and Ryan Bell up front. Won breaking balls and generally used the ball well. Saw a point effort carried wide by the wind in the second-half.

E Duffy – Another league debutant. He played in a cluttered middle third. Wasn't involved for much of the opening quarter. Should've squared the ball when he went for goal and opted for a point later in the first-half.

B McCarron – Started inside but didn't stay there too much. Spent much of the game bogged down in midfield but his late score was a memorable moment from his first league outing.

R Bell – Didn't have the same impact as the in the McKenna Cup. Landed two points but spent a lot of time away from goal.

C Bradley – Played at centre-forward but spent much of the time chasing Conor Reynolds and Jack Gilheaney back through midfield. Replaced by Shane McGuigan.

S McGuigan – A hamstring concern limited him to an impact man and his goal gave Derry a second chance.

N Toner – Came in for Gavin O'Neill and played close to goal but not really involved much.

N Keenan – Replaced Liam McGoldrick and tried to get Derry attacks going on the right wing.

A Doherty – Brought for the last 15 minutes for a league debut. Played too far away from goal to be effective.

C McWilliams – Had the chance to win the game but was blocked down by Shane Quinn and was sent off on a second booking.