INTERVIEW: Retirement not a full stop for long-serving Magherafelt principal

The principal of one of County Derry's largest primary schools has retired after 35 years in education. 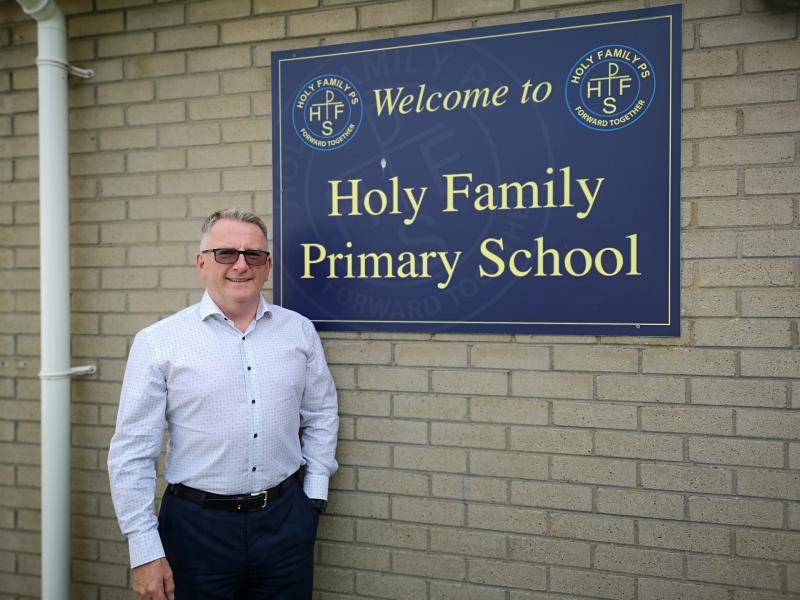 Holy Family PS Magherafelt principal Peter Donnelly last week brought the curtain down on a 35-year career in education, with almost two decades spent in the town. Liam Tunney caught up with him to both reflect on his career and look to the future.

There are bin bags dotted around the foyer. Rusted staples cling like embedded fossils to stripped noticeboards. Exhausted smiles on the faces of staff.

In his office, retiring principal of Holy Family Primary School in Magherafelt, Peter Donnelly, is taking a moment to relish the end-of-term rituals one last time. 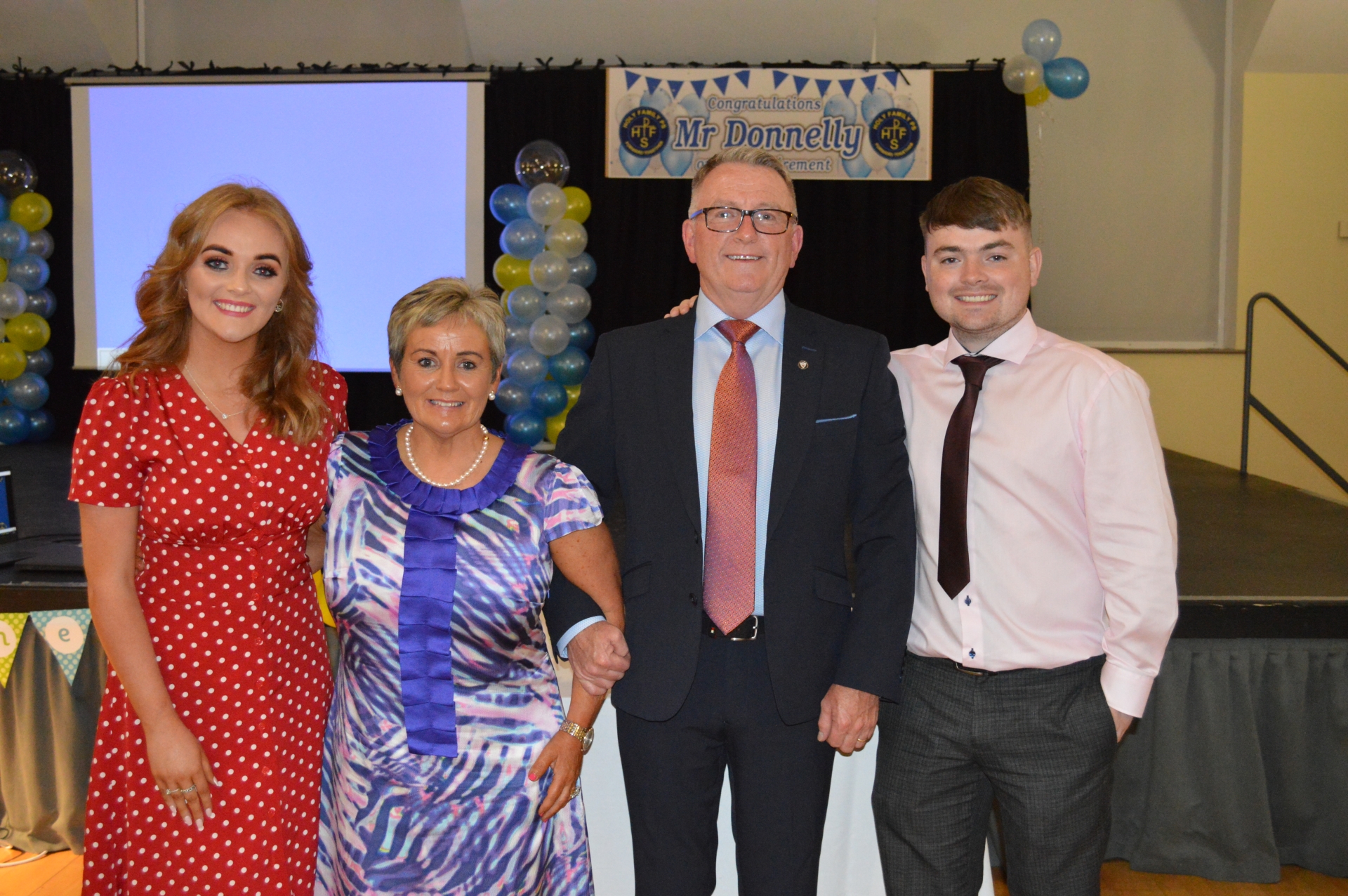 Mr Donnelly with his family at his retirement celebration.

“It's a strange thing; I retired yesterday and then I'm in school today. There are a few things to get sorted out and everything will draw to a close after that,” he told the County Derry Post.

“I was in school this morning putting a screw in a door and trying to fix a lock and put other things in place for next year.

“It's part of your psyche, you just can't help but do those things. You tie up loose ends and have discussions about next year, but I have to nearly nip myself and accept I'm not going to be there.”

“I was welcomed at the door, shown my office and told the 11 plus results had just come out the weekend before.

“My first week was spent in the office interviewing 89 parents making choices for the next level, and maybe each day getting out at lunch time or in the evening to say hello to people.

“I realised it was a big school, there was a lot going on, and wondered how I would ever get a handle on it all. Of course, time evolves that for you, and you do get on with it.

“There's never been a problem that can't be breached. The best way to deal with complications is to sit down and talk to people and find out what their needs are.” 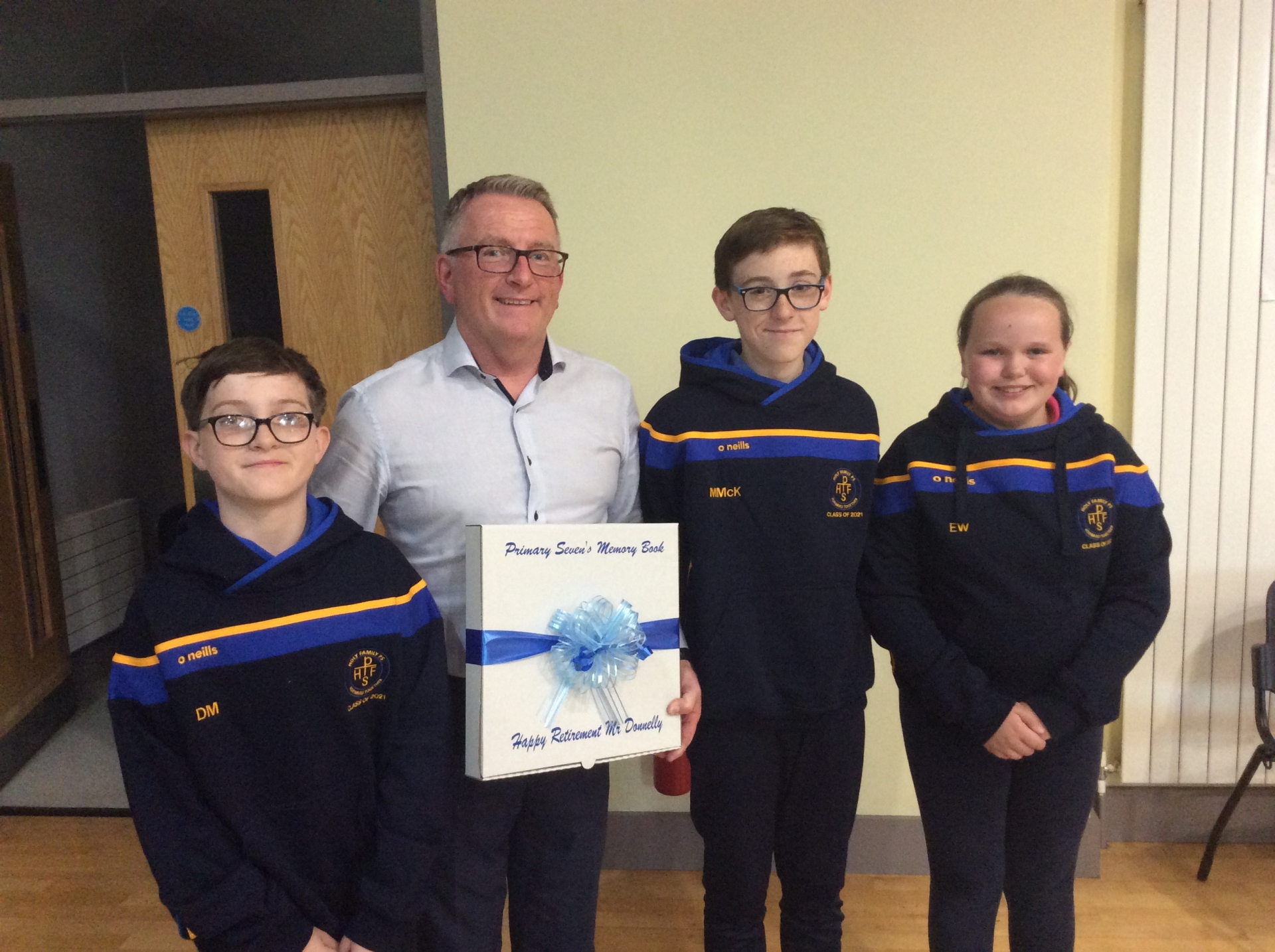 Some pupils present Mr Donnelly with a retirement gift.

Having begun teaching at a time when a banding machine was at the cutting edge of modern technology, Mr Donnelly has experienced an accelerated period of change in education.

One of the most positive changes for him has been the increased diversity of school enrolment that immigration has brought.

“When I was growing up, you were a foreigner if you came from anywhere the far side of Dungannon,” he said.

“The introduction of immigration and children coming from other countries has been a positive. It started in our school about 15 years ago.

“A number of years back, we started the shoebox appeal pre-Christmas time, and were talking regularly about how the appeal would help other people.

“We always said they were going to help people you'd never see, that you'd never know, but the man above knows what you've done for other people.

“One year, a wee girl put her hand up in assembly, a wee Lithuanian girl, who said she had got one of those shoe boxes one year.

“It made the hairs stand on my neck. We had been involved in a concept that was helping other people, and sitting in our midst was someone who had received that gift from the likes of ourselves.

“It made it very real for us, that people did get that help, and that was a great, positive feeling. For me, it was a show-stopper.” 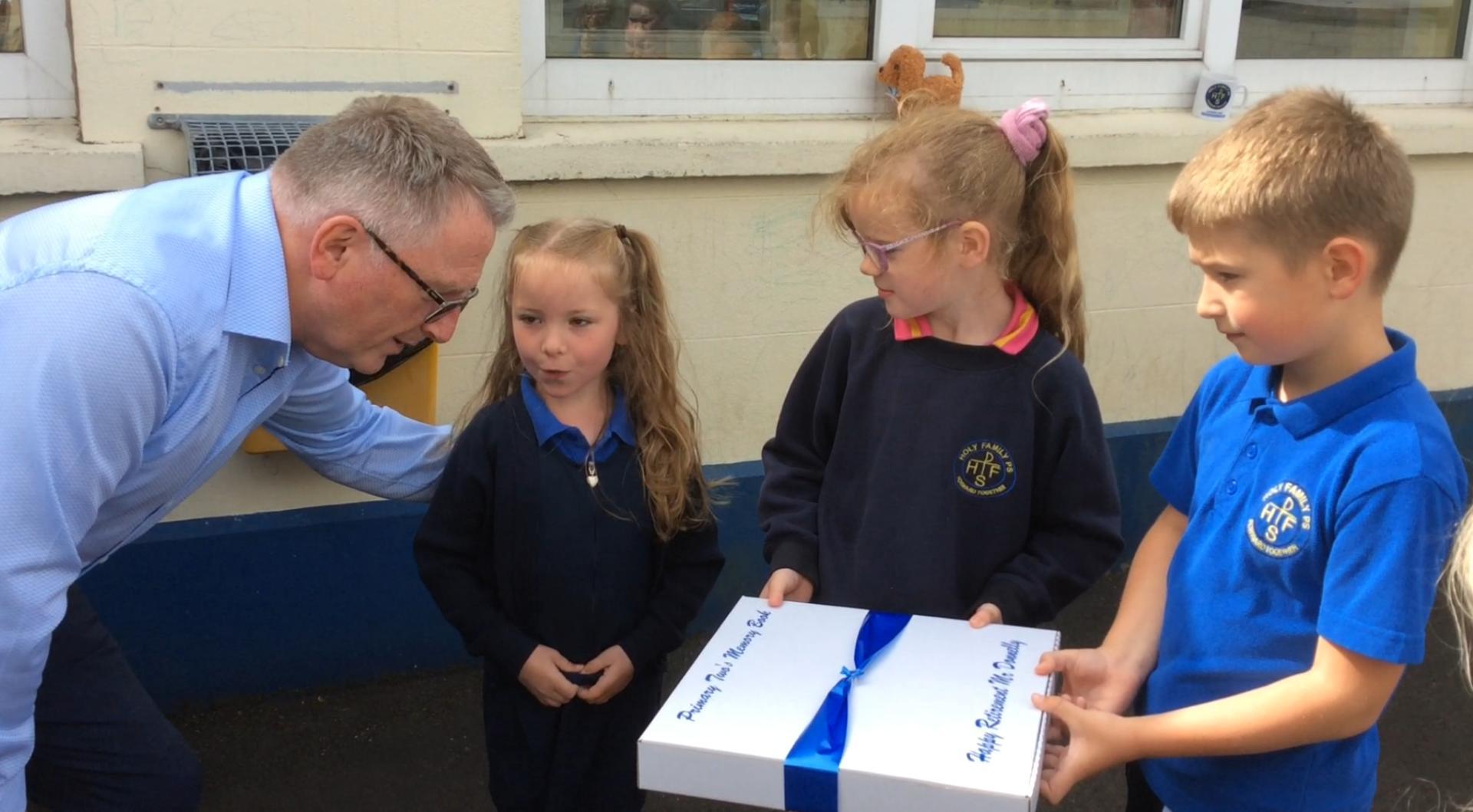 Mr Donnelly with some of the Holy Family pupils.

Peter has placed a focus on the importance of school events and activities for creating lasting memories, and he has been involved in a variety of adventures over a 35-year period.

As well as taking a group of pupils and families from Stewartstown to see the Millennium Dome in London, there was also a brush with Russian TV.

“A long time ago, there was a lady in Baronscourt involved in the Pushkin Awards. She was the fifth generation of the famous Russian poet,” he said.

“We took part in that programme in my first principalship in Knocknagin, and a little girl from our school was asked up to Baronscourt.

“Russian TV arrived to record a number of children performing their poetry, so that was a wonderful achievement at that stage.

“I was big into the idea of activities and events. Children always remember the experiences you create for them.” 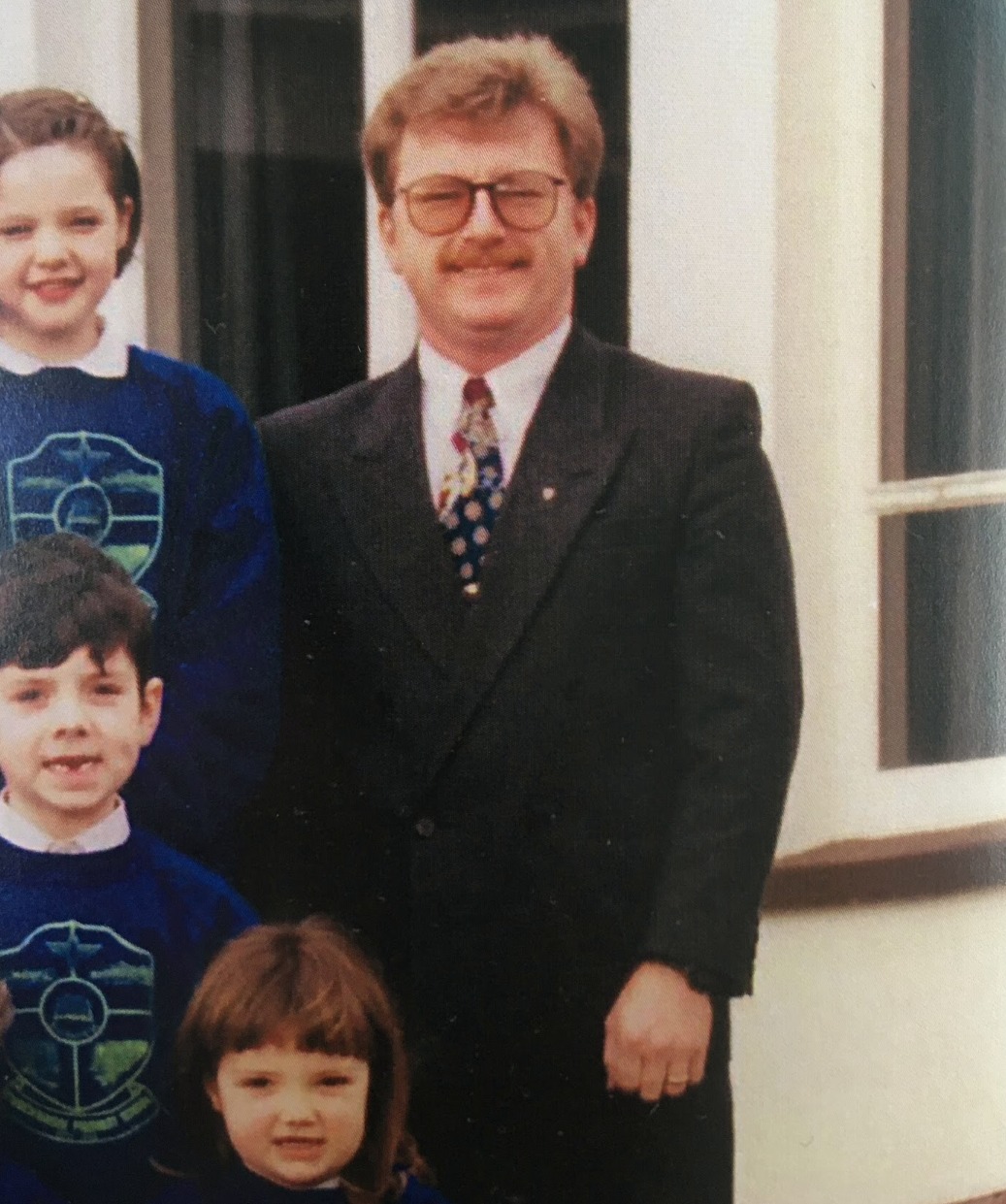 Mr Donnelly in the early days of his career.

There have been low points as well. Peter recalls having to bring one boy out of class to take him to the office, where his father was waiting to tell him his mother had passed away in a car accident.

“That was very difficult and hard to manage. Losing members from a big family circle is always difficult – difficult personally and also for trying to manage everybody's emotions.

“Life is not always perfect every day. The low moments were the sad moments where children or parents may have passed away while they were pupils at the schools.”

After over three decades, you would be forgiven for coasting to the finish line, but the final 18 months of Mr Donnelly's career have been spent dealing with a problem for which no-one had any training.

He says having to deal with the Covid-19 pandemic brought challenges, but also opportunities to learn in the twilight of his career.

“Even with all the challenges that came with Covid, there was a lot of good learning too,” he said. 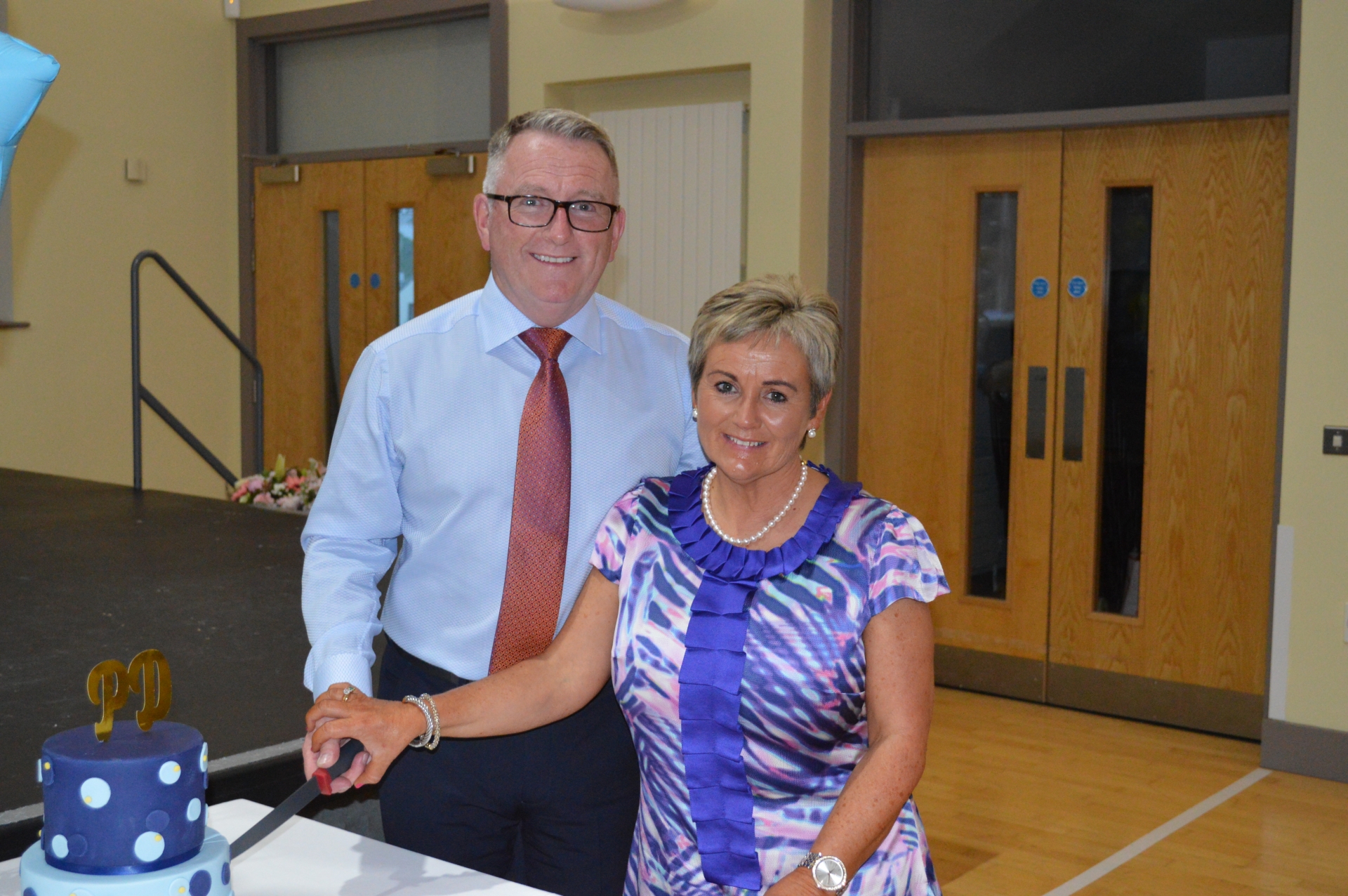 Peter and his wife Nuala have retired at the same time.

“It helped us to improve systems in school too, because we had to find other ways of doing things. Before I left there, we had a whole-school assembly with everybody in their rooms.

“Our ICT guy hooked all this up and was able to move around the classrooms. I could see them live and they could see me live.

“These are things we may not have stretched ourselves to a few years ago. One thing about schools is that if you're innovative enough, you will find a way around whatever the issue is.

“People think it had all died down, but there were children still away getting tested, even in the last week there.

“In having cases, you were knocking family life sideways, just like that. You maybe had to contact families at 7.15 in the morning and saying their children now had to stay at home for a week.

“That's not good, because people have family lives based around routines and they had to move away from those.”

Peter's wife Nuala has also retired this year, but any ambitions the couple have of taking it easy are lofty.

“My mother has told me I'm not allowed to retire and do nothing, or I'll wither away, and she's absolutely right,” said Peter.

“I'd like to try and give something back to the system, to give support, because I know the realities and the difficulties with it.

“I wouldn't mind the odd lie in to be honest, but mostly a bit of family time where the foot is not just full to the throttle every day. We don't want full stops, we'll just have easing off and commas. 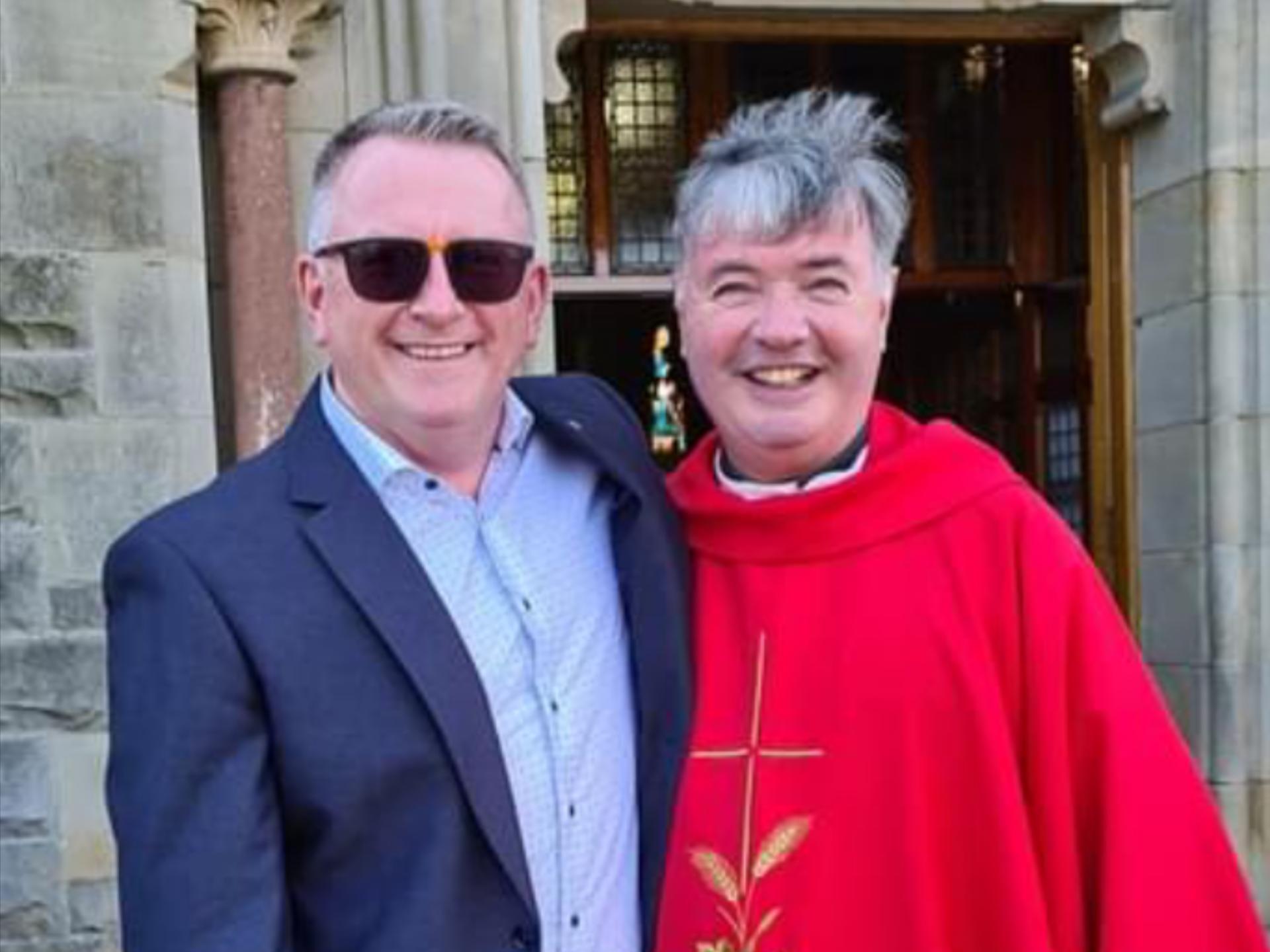 With Fr Gates at the retirement celebrations.

“I also have to put on record my thanks to the community of Magherafelt for all their support.

“Part of the difficulty of getting older is that people begin to ring you and ask for advice. All of a sudden, you become the guy who's known to be asked.

“That was an evolving thing, you saw yourself becoming that elder statesman, who people came to for support and advice, and maybe there's a role in that for carrying forward.

“If we're going to look after our young principals going forward, that support needs to be there. I have 35 years of experience built up, and I don't want that to disappear without giving something back.”

Parish priest Fr Gates said the community of Magherafelt were 'indebted' to the retiring principal.

Move to tackle careless parking at school drop off and pick up times.