A line of traffic snakes its way up Broad Street. Plans to park on Meeting Street are scuppered. There are no spaces. Magherafelt looks busy.

For a brief moment, after finding a space in the off-street car park, I contemplate leaving things for the day. Head back to Castledawson, it looked quiet enough.

After a glance up and down the street, I needn't have worried. There might be heavy traffic filing around the town's streets, but its pavements are almost deserted.

One man makes his way around the corner onto Broad Street, headphones on his head and wearing shorts, oblivious to the wind sweeping puddles across the street.

A queue has formed outside Ulster Bank as I make my way down the hill towards the Bridewell and past a tired-looking row of derelict buildings on Church Street.

Only a faded barber's pole gives any indication of what used to serve in this part of the town. Some of the fixings that used to hold the shop's sign cling stubbornly to the wall.

Further down the street a man paces back and forth inside a sports supplements shop. Many shops around the town are filled with impatient staff doing the same.

Outside, a Renault Clio sits at an awkward angle on the side of the street. Moving past, it's clear why. The rear bumper has been smashed.

A sign on the handle reads 'Sanitised and Sealed', but there's no sign of delivery yet. Around the corner on King Street, the picture becomes more clear. 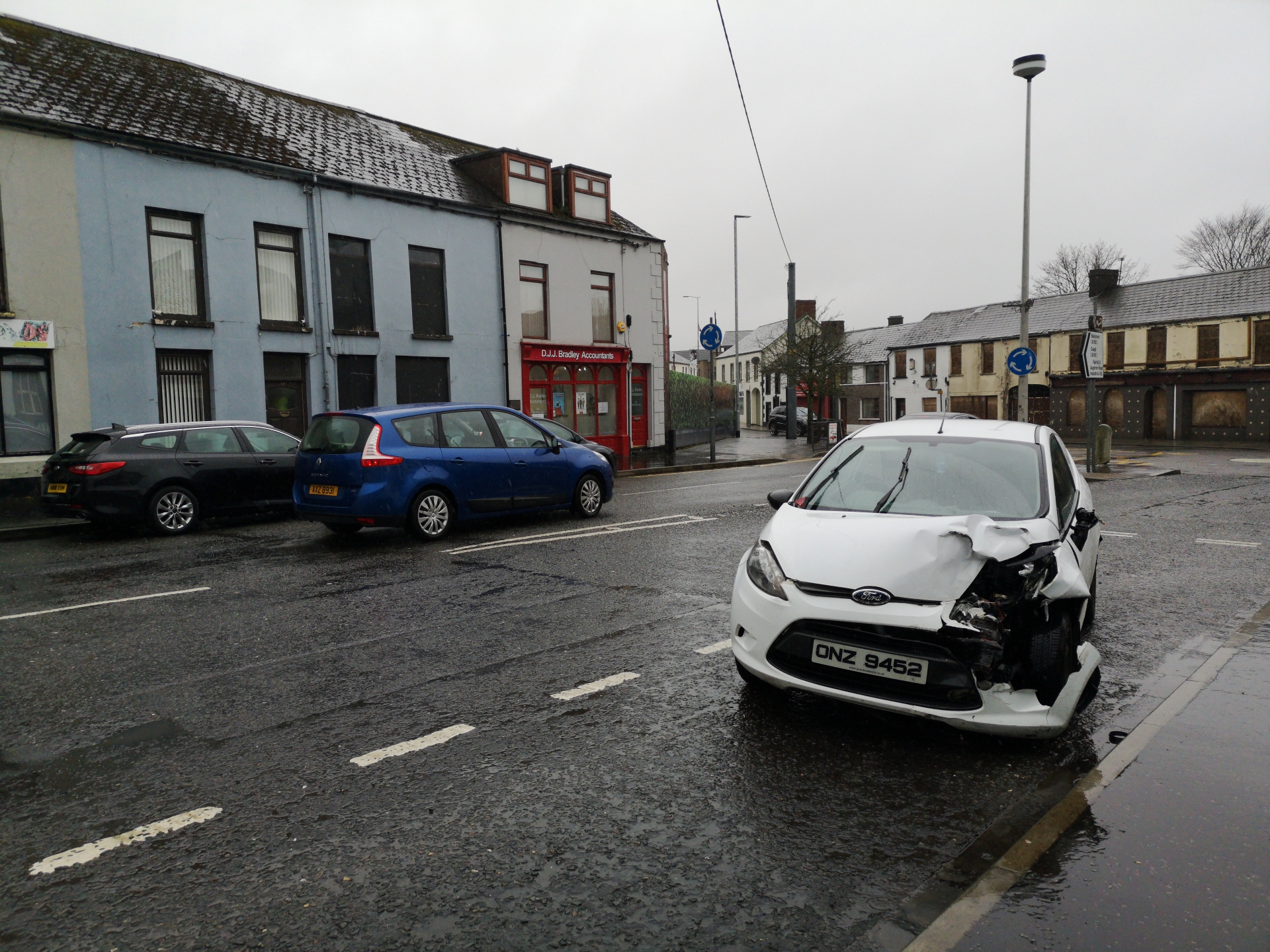 WORSE FOR WEAR: A Ford Fiesta sits as a monument to a collision on King Street.

A battered Ford Fiesta has been shunted into an on-street parking space in a similar fashion, its front bumper looking remarkably similar to the Clio's rear.

Returning past a dormant Terrace Hotel, I move past the mini-roundabout onto Union Road, where it is quieter still.

A car park attendant at JC Stewart ferries trolleys to their dock. Presumably to cope with the biting wind, he is dressed in a balaclava. It's a sign of the times that no one bats an eyelid.

That wind raises a din off the flags outside Bryson's Bar as I head past, up Garden Street and onto Rainey Street. A sign outside K9 Bonus pet food shop reads 'No Loitering'. In I go.

Inside, Andrew is double-bagging pet food for a customer. He tells me this lockdown has been different, but Covid-19 is not the only factor.

“With Brexit being tied into it as well, more people haven't been able to get their stuff online, they were coming in here to see if we had it,” he says.

“It has affected some of our supplies and our orders. A lot of stuff was being brought over from England and France and because of the checks, it takes longer to get it through. 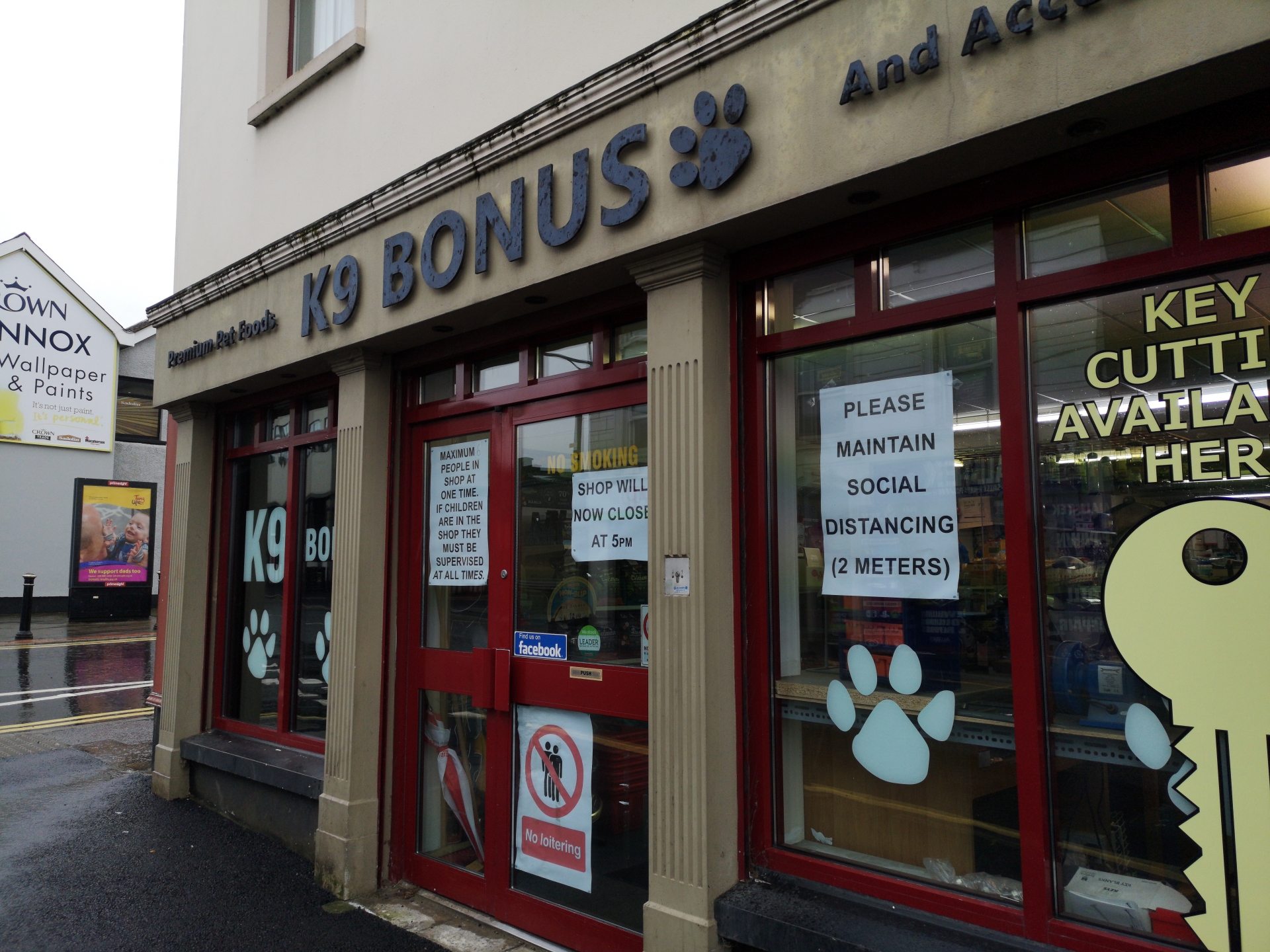 “It's thrown everyone's schedule off. You have people coming in towards the end of the week and then it could completely die off until the middle of next week. There is hardly anybody about.”

Last week, Magherafelt's BT45 postal area recorded a rate of positive cases per 100,000 of population of 160.3, the highest in County Derry and well above the overall NI figure of 109.8.

“I'd be lying if I said it didn't concern me,” admits Andrew.

“I find it hard to keep up with the news, so I don't look at it all the time, but I'm always of the mindset that it could spike at any time. It's always in the back of your mind.

“People are a lot more nervous and more aware of their distance to you. Usually you get people who would stand and talk maybe ten or fifteen minutes, but nobody really wants to stay about.”

Staying about appears to have caused issues in the shop before, resulting in the 'No Loitering' sign that caught my eye at the door.

“It's not so much of an issue now, but you used to get people about the front of the shop and blocking entrances and exits,” says Andrew.

“There used to be the odd person at the beginning of the first lockdown, before we had the signs up, that would go into a 20-minute conversation and it's not the best place to be doing that.” 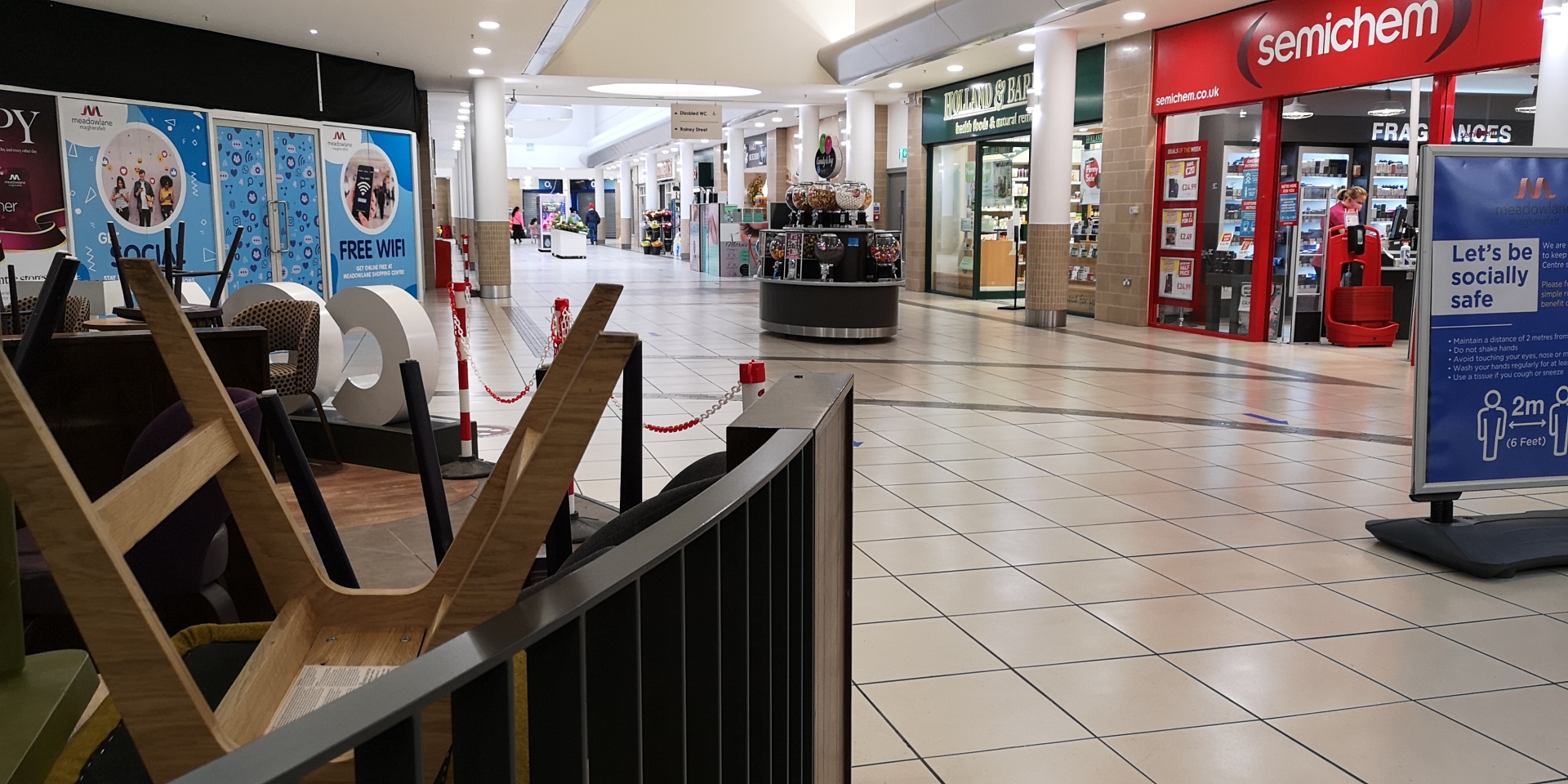 Across the car park, Meadowlane Shopping Centre is all but empty. There is an eerie feel inside as the one-way system directs the handful of shoppers around.

A sign on the front of Montgomery's informs passers-by that their Christmas Club is 'now open'. We aren't told if it means 2020 or 2021.

On the window, a further sign directs people to their Facebook page if they see anything inside that catches their eye. Businesses adapt.

Back in the town centre, another local business owner is performing similar economic gymnastics.

“We had to petition the local MLAs to open during this lockdown to be in line with the rest of the UK,” says Darren Workman, owner of Itek mobile phone and electronic repairs shop.

“During the first lockdown, we were considered non-essential, so we had to close. It put us in a difficult spot, but leading into the summer, we were back open in June. It's a hard time to judge and cater for.”

Darren's assessment of the town's economic landscape and level of footfall is as frank as it is bleak. 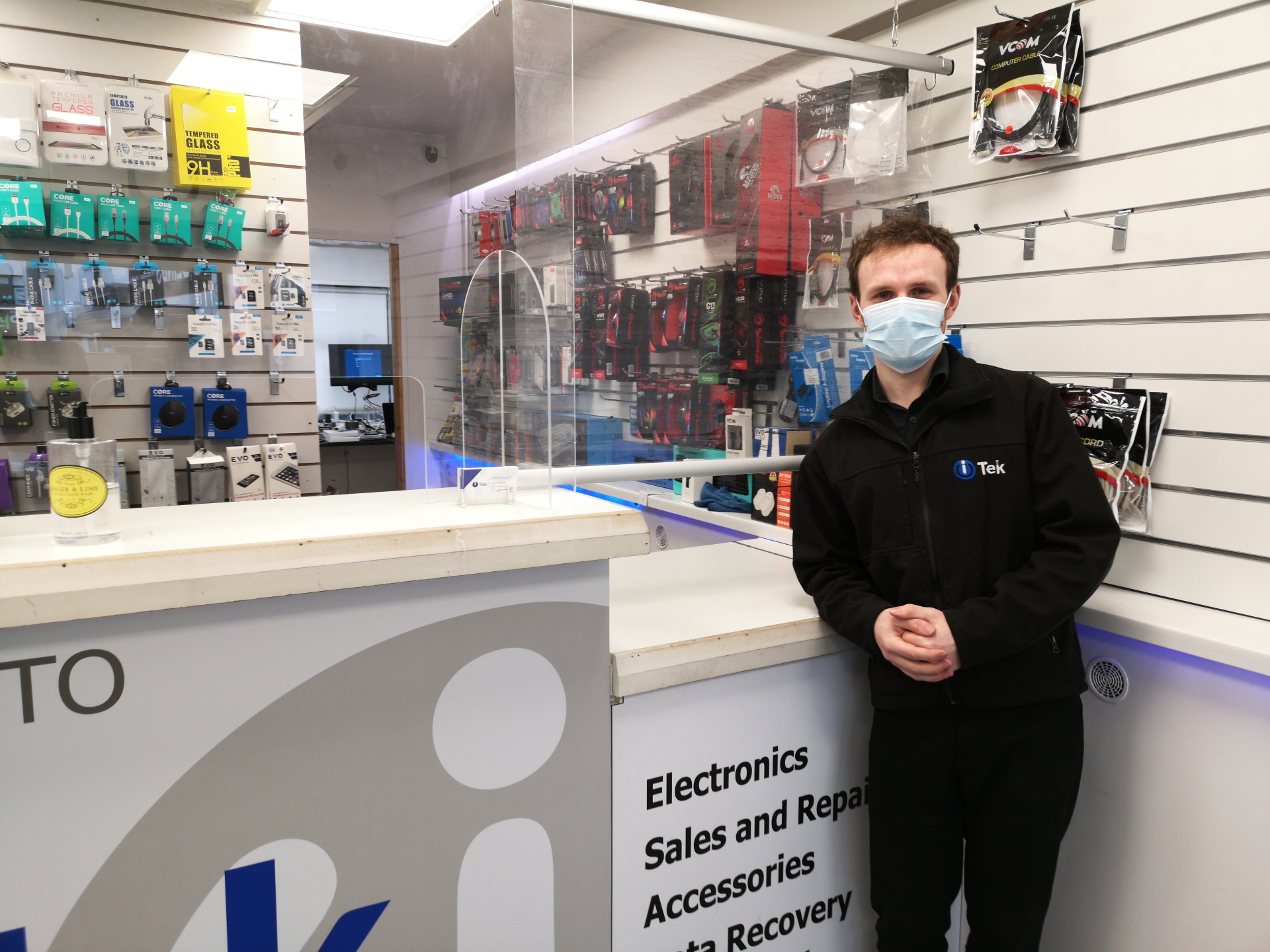 Darren Workman of ITek in Magherafelt.

“In terms of looking out onto the street and seeing people there that you know are out there to take advantage of any businesses that are open, it's not quite the same.

“It's not essential for some businesses to be open, but if you want to keep the economy going and people to survive without mental health issues after it, it's better coming out of this as soon as we can.”

One unexpected up-turn from the pandemic has come in the form of repairs to equipment. The pressing urgency of home-schooling has seen demand soar.

“For the home schooling, that's where the technology is definitely picking up. Ipads are massive right now in terms of repairs,” says Darren.

“If the kid drops it, the glass breaks and then it's more urgent because they need their homework done. There are so many people with broken tablets rather than phones at the minute.

“We're open for repairs and maintenance and retail-wise, we've got our website, but footfall is down. It's not dire, but it's not great.” 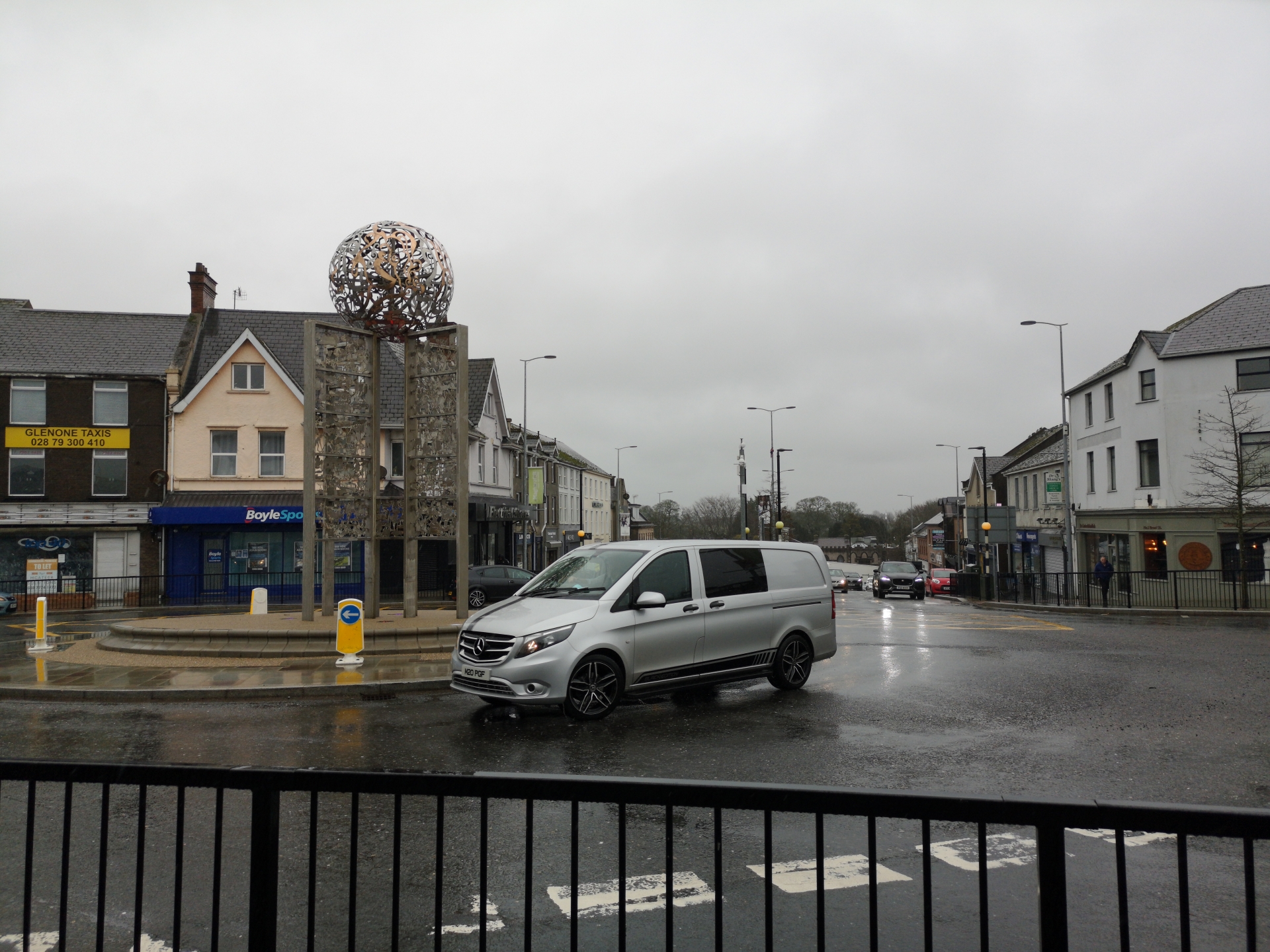 Traffic at the town's central roundabout.

Despite Darren's bleak assessment of the footfall, he tells me the latest lockdown has actually been busier than the previous periods.

“There seem to be more people about in this lockdown, but they're being more cautious. People are just at the end of their tether,” he says.

“There are down in terms of footfall into the shop, but there are also upsides. We're focusing more on developing other areas of our business because of that. We are trying to take the opportunities.

So many already are. One nagging consistency in all the areas I've visited is the amount of empty shop fronts, boarded up businesses and closing down sales.

On my way back to the car, traffic is pulling awkwardly to the side of the road as an ambulance wades through, lights and sirens blazing.

The casualties of the pandemic, both human and economic, continue to mount.