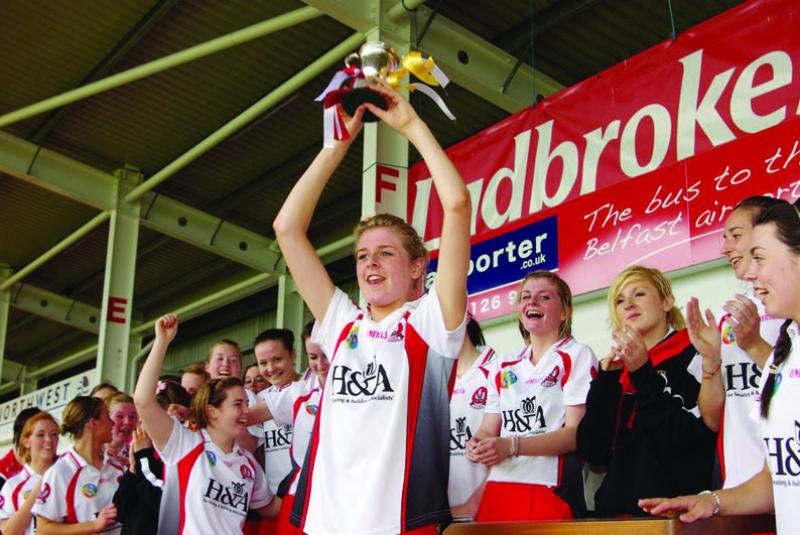 It was a long time in coming, but Derry are finally U18 All-Ireland champions for the first time after a dominant display over Antrim at Celtic Park.

Gerard McErlane’s girls turned on the style on the biggest stage to race to a ten point victory; a win that was achieved long before the final whistle.

The Oak Leaf girls stormed to the Ulster title earlier in the summer before emphatically defeating Offaly in the All-Ireland semi-final.

And in front of a sizeable crowd at Celtic Park, they showed their dominance again with a comprehensive victory, achieved with minimal fuss over a clearly talented but outmatched Antrim.

The Saffrons were many people’s favourites to life the national title, especially after their semi-final win over Waterford, and they served notice of their intentions with the opening point of the game; Rebecca Walsh scoring from a free.

But Derry were soon off and running themselves and Mary Jo McCullagh got their first score of the day to level the game after seven minutes.

Then began the Karen Kielt show, as she showed just how deadly she was from distance, hitting the first of several; long frees to put Derry ahead for the first time.

Neither the occasion nor the ground were getting to either team as both went for it in an open game and Antrim turned the score back in their favour with two quick fire scores, one from Samantha McKillen and a free from Aimee McAtamney.

Derry responded positively and they should; have had the game’s first goal when both McCullagh and Grainne Ní Chatháin before squaring the ball to McCullagh who had a free sight of goal, but at the crucial moment she lost the flight of the ball, which squirmed from her grasp and the chance was gone.

Nevertheless, the missed opportunity only inspired Derry and another free from Kielt put the home team back in command.

But Antrim were not shy either and after Ruby Marie Rice levelled the game at 0-4 each, Chloe Drain put Antrim in charge for the third time as the game continued to swung back and forth.

But the momentum of the game changed with the first goal of the afternoon, coming when a three on one attack from Derry ended in Eilís Ní Chaiside feeding McCullagh who made no mistake this time from close range.

From there Derry did not look back, and although Antrim did their best to reduce the gap, Derry soon began to break away.

Just seconds after Kielt had almost found the net with an incredible effort from half way, Rachel Kelly scored to take Derry’s lead to three points at 1-4 to 0-5, a score which was quickly added to by the clinical Kielt who had the final say of the half, leading it 1-6 to 0-5.

Antrim had work to do and they started the second half positively with Samantha Killen and McAtamney reducing the arrears. But any concerns that the Derry following may have had were quickly dispersed as McErlane’s side began to dominate, with three points from Kielt followed by their second goal, scored by Mary Kelly.

Aisling McFadden hit back to make the score 2-9 to 0-8 but with only 20 minutes to play, time was quickly running out for the visitors, who needed to find the net themselves before it was too late.

But Derry were quite simply on fire now and they put the result beyond doubt with their third goal of the game, Grainne McNicholl finding the top corner from the angle with a bullet drive which flashed past Cathy McCarry.

Antrim, to their credit, kept going, but this was by now a lost cause, and McKillen’s point, which would prove to be their last at 3-9 to 0-9, was nothing but consolation.

Shauneen Donaghey entered the fray in the last ten minutes as the Derry boss kept his side fresh, and it was the new All Ireland champions who would have the final say.

And who else but Kielt to finish it off, with her seventh point of the afternoon before the full time whistle went to spark wild celebrations amongst the Oakleafers.