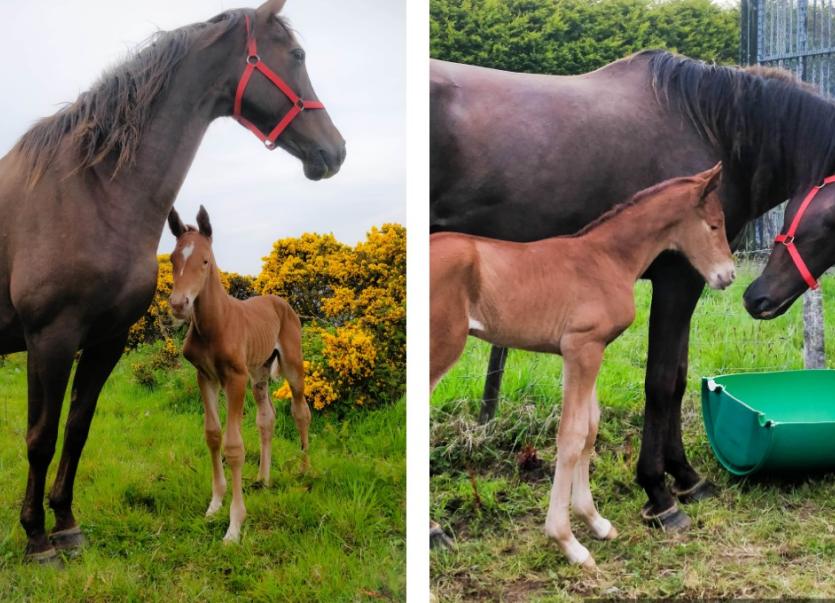 Horses belonging to Niamh McElhinney; she has another mare heavy in foal at the moment who would be at risk if fireworks were set off

Derry council’s plans to test fireworks on Sheriff’s Mountain were cancelled after farmers living in the area threatened legal action if their animals were ‘injured or lost’ due to ‘extreme stress’.

The annual Halloween festival in Derry is the highlight of the year for locals and attracts thousands of visitors from all over the world.

However, the Coronavirus pandemic and likelihood that social distancing guidance will still be in place come October means that the local authority has had to rethink this year’s celebrations.

On Tuesday it emerged that Derry City & Strabane District Council had proposed testing fireworks in different parts of the city this week to explore ‘various options’ ahead of Halloween.

But plans for fireworks that night at 10.30pm on Sheriff’s Mountain were cancelled at the last minute after livestock owners in the area furiously lodged complaints with the local authority.

A post on the Derry Halloween page at 10.38pm confirmed that the decision was taken due to health and safety concerns but people were urged to ‘keep an eye out’ at the same time on Wednesday, July 22, for fireworks in the Waterside.

Earlier on Tuesday, Sinn Féin MLA Karen Mullan and Councillor for Foyleside Mickey Cooper welcomed the news that the council has begun preparations for community-based Halloween events in Derry by carrying out test firing of fireworks from a variety of locations.

Mickey Cooper said: “Clearly hosting a large city centre event for thousands of people was not practical due to the COVID restrictions.

“The fireworks testing events this week also demonstrate that council intend to still include fireworks within the local programmes which will visually enhance the events taking place across the city.”

Livestock owners in the area reacted angrily to the news and said they were shocked that the council had not notified them or sought permission.

They weren’t happy with local representatives endorsing the council’s plans and accused them of ‘city arrogance’.

“The livestock in Sheriff's Mountain will not only be traumatised but legal action will ensue in the event of injured or losses of any livestock costs of any kind.

“No permission has been granted by people living or keeping livestock in Sheriff's Mountain of this event.”

Ms McElhinney said there are pregnant animals in the area, including her own, which could abort if suffering from extreme stress because of the fireworks.

She added that fellow livestock owners on Corrody Road have been informed of planned testing in the Waterside and they were encouraged to take action accordingly.

“The local council is being flooded with complaints as we speak,” she concluded.

In response a spokesperson for the council said that it is looking at the feasibility of various options for this year’s Halloween celebrations including a number of trial fireworks at various locations across the city this week to see if an alternative fireworks display is possible.

She explained that the trial in the Sheriff’s Mountain area was postponed due to health and safety issues and arrangements are being made to reschedule at a later date.

The Council spokesperson added: "It should be noted that these are trial fireworks and of a very short duration simply to determine the feasibility of the site and the viewing range of any actual display."

Today the council confirmed that the Waterside trial went ahead as planned.