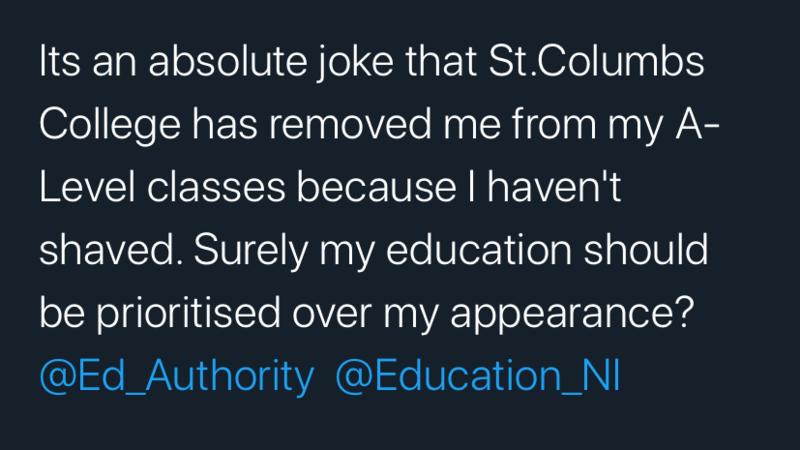 A sixth form pupil at St.Columb's College in Derry says he has been removed from A-Level classes for growing a beard.

An online petition launched by Carrick McClean has now been signed over 2,063 times, which isn't far off its 2,500 target.

The latest person to publicly support the petition is Theoretical Astrophysicist, Peter Coles.  He is a professor in, and Head of, the Department of Theoretical Physics at Maynooth University in Ireland. He carries out research in the area of cosmology and the large-scale structure of the Universe.

The Beard Liberation Front, the informal network of beard wearers, has also rallied behind Carrick.  The group says, "the pogonophobic rules of the school do not allow students to have a beard."

BLF Organiser Keith Flett said, this is not the 1950s and we fully support Mr McClean. "There is a petition that can be signed and we expect a change of mind by the school."

However, other members of the public have backed the school, saying its clean shaven policy is fully justified.

Mr McClean's petition reads as follows: "As a young adult I work, drive, pay tax and national insurance, and I am registered to vote. But whenever I enter the school I am treated like a child, being forced to be clean shaven.

"As the school website states 'The aim of St Columb's is to enable its pupils to realise their full moral, social, intellectual, physical and aesthetic potential.'  I see this policy as limiting me in my potential to be myself and by being placed in the study for my choice of growing a beard has the possibility in limiting my achievement academically as I cannot attend my classes.

"The amount of pressure on pupils at the minute is astronomical, from getting the best grades, meeting deadlines and a range of other factors school can play a huge affect on someone’s mental health (which is a huge concern in Derry) By giving pupils the freedom to have facial hair if they desire I believe we would be much happier in our learning environment which is paramount to a more fulfilling educational experience.

"As a socialist and believer in equality I hope that 2020 will be a year of significant change for the better, and I aspire that St.Columbs College will be apart of this, allowing me and my fellow pupils to be ourselves."