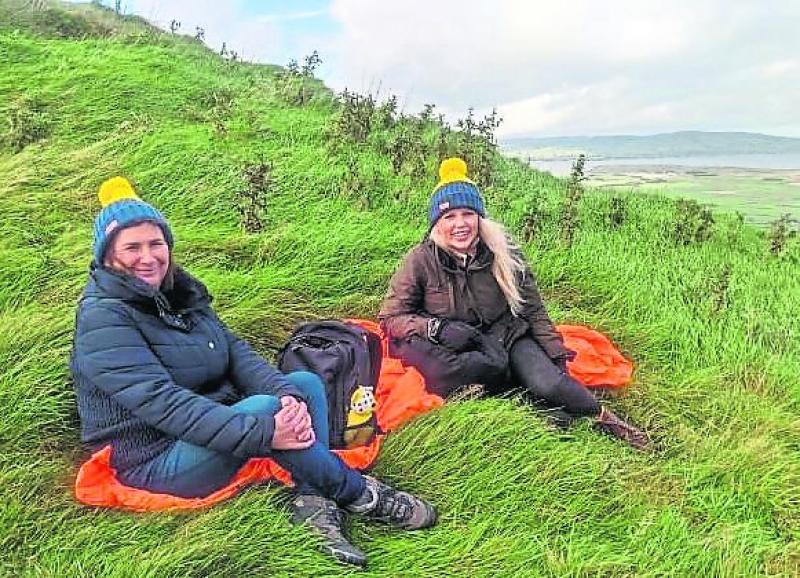 Whilst on her ramble, Ellie met three women from Women’s Aid ABCLN to discuss the rise of domestic abuse during the Covid-19 pandemic and the devastating impact it has had on children, young people and their families.

Whilst highlighting this incredibly important cause, Ellie walked through the extraordinary mountain area in Derry with incredible panoramic views that stretch for miles, with the north coast across the bay and the Scottish coastline visible.

During her ramble, Ellie spoke with Fran, Area Manager at Women’s Aid ABCLN, to hear more about the vital support on offer to vulnerable women, their children and families whom have been/are subjected to domestic abuse and how funding from BBC Children in Need enables them to provide assistance to those affected by domestic abuse.

Ellie also heard from two young women, who will remain anonymous, sharing their own personal experiences of living through the trauma of domestic abuse as children whilst located in rural and isolated communities.

The two women also talk to Ellie about the importance of specialist support for young people who are so often the hidden victims, a truly courageous and important conversation shining much-needed light on an unsettling issue.

BBC Children in Need currently fund Women’s Aid ABCLN to the value of £97,958 to provide two project workers who support children and young people who have experienced domestic abuse in their homes.

The one-to-one support over a period of time creates a safe and caring environment for young people to overcome their deeply traumatic experiences.

Fran, Area Manager at Women’s Aid ABCLN said: “It’s incredible to be part of this year’s Countryfile Ramble for BBC Children in Need.

“It’s so important we raise awareness around the one-to-one support we offer to help survivors feel safe and cared for after living through a deeply traumatic experience.

“We are so grateful for the funding we receive which enables us to offer this vital support and honoured to be part of the 2021 fundraising Appeal.”

Over the course of six years, ramblers have raised more than £10.3million for the charity.

Since 2015, Countryfile has seen presenters and young people tackle routes located across the UK from Northern Ireland to the Cotswolds.

This year will see the presenters and young people taking on additional ramble challenges in some of the nation’s most exquisite locations including Stonehaven in Scotland, the Mendip Hills in Somerset, Helvellyn in the Lake District, Holkham in Norfolk and Cwmcarn Forest in South Wales.

This year’s ramble will be tackled by Countryfile presenters Matt Baker, Ellie Harrison, Tom Heap, Margherita Taylor, Steve Brown and the newest ramble addition: Charlotte Smith. John Craven will also be supporting, championing his co-stars and catching-up with members of the public via video-calls on their own organised rambles.

Continuing with the same approach as 2020, the presenters are set to lead solo rambles, closed to members of the public as core safety measures are honoured due to Covid-19.

However, the public are still encouraged to get involved by taking part in their own sponsored rambles to help change the lives of disadvantaged children and young people across the UK.

Full details on how to get involved are available at bbc.co.uk/countryfile.

This year’s presenter rambles will take place early October and will be broadcast as part of The Countryfile Ramble for BBC Children in Need, on BBC One, Sunday, October 24 at 6.00pm.