All Ireland final slot at play for Eoghan Rua camogs

The Coleraine side will take on Athleague of Roscommon. 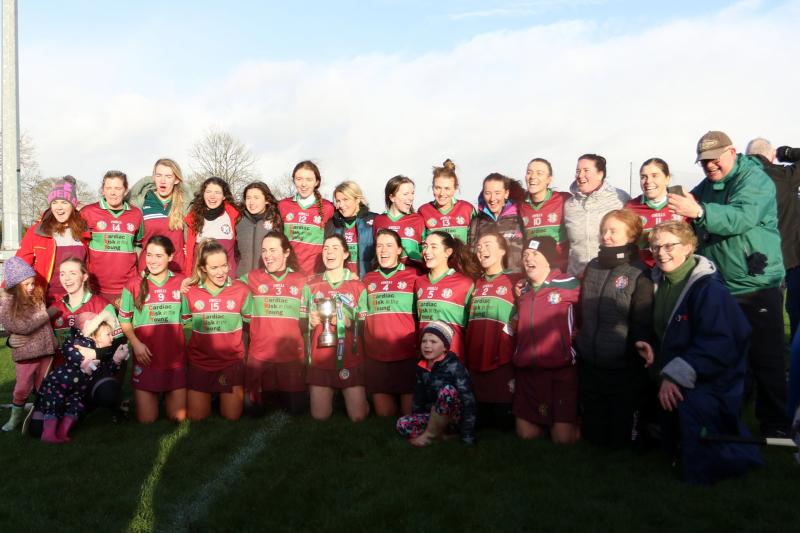 It should have happened last Saturday and it was a huge disappointment on Friday afternoon when this All-Ireland Junior semi-final fell victim to Storm Eunice.

Eoghan Rua Coleraine had been on a roll for three Sundays in a row, from a stuttering performance against Laragh United in the Ulster quarter-final through a facile semi-final against Mayobridge into a final against Loughgiel when they pulled away with five points in the last five minutes to become the first club to put their name on the three main Ulster club trophies.

This was in contrast to the Derry Intermediate championship back in October. It is fair to say that the team from the triangle struggled to the county title, doing just about enough to see off Newbridge in the final.

However the gap between that final and the Ulster campaign has moved their game up a level.

They benefited from the timing of the provincial championship as two key players, Méábh Duffy and Katie Mullan, came very much into the frame. Méabh, who had her third baby at the end of August, returned to take her usual spot at centre-half back and the Irish hockey captain stepped in to lead the attack at centre-forward.

They showed some rustiness in the Laragh game when the free-taking of Méabh’s sister Gráinne Holmes saw them through to a two points’ victory. But the pair took charge of the semi-final against Mayobridge and once more in the final against Loughgiel.

Eoghan Rua of course have played at All-Ireland level before and Mullan and the McGoldrick sisters were key players a decade ago.

The other survivors from that fine team that won back-to-back national Intermediate titles and claimed an Ulster senior title were also prominent as the provincial campaign developed over the past month.

The north coast club have been reacting to 'massive' demand on their facilities.

Maria Mooney was superb at full-back while captain Eilis McNamee, midfielder Megan Kerr and forward Roseanna McAleese all made vital contributions particularly during the Ulster final.

Behind them playing in goals is Grace McMullan, one of the best forwards the Ulster game has seen.

However it would be unfair to say that the more experienced players alone have been responsible for the successful run. The whole team has improved as the run continued and when you are playing with that type of confidence you want the next game to happen as soon as possible.

That is why the shoulders slumped when news came through last Friday that the game was postponed. However I still think that they can further raise their game in this semi-final with Athleague.

The back-to-back Roscommon champions were in the 2020 All-Ireland semi-final before Christmas but lost to Clanmaurice from Kerry.

This effectively means that they have not won a game since securing the second county title back in October. They have played a couple of challenge games in recent weeks, but it is hard to get the same intensity into a challenge game as Coleraine were getting from three, well two at least, competitive knock-out games.

Much will depend on how well Athleague get their challenge going in the opening half of the semi-final.

However, no Ulster team has appeared in the Junior club final since the competition came into being in 2010. Eoghan Rua, with their mix of experience and youth, might just stand the best chance of ending that losing sequence.

Michael McQuillan's friends took on a running challenge to raise money for charity.