Nathan Gartside grateful for 'arm around the shoulder'

'Declan was massive for me during that period.' 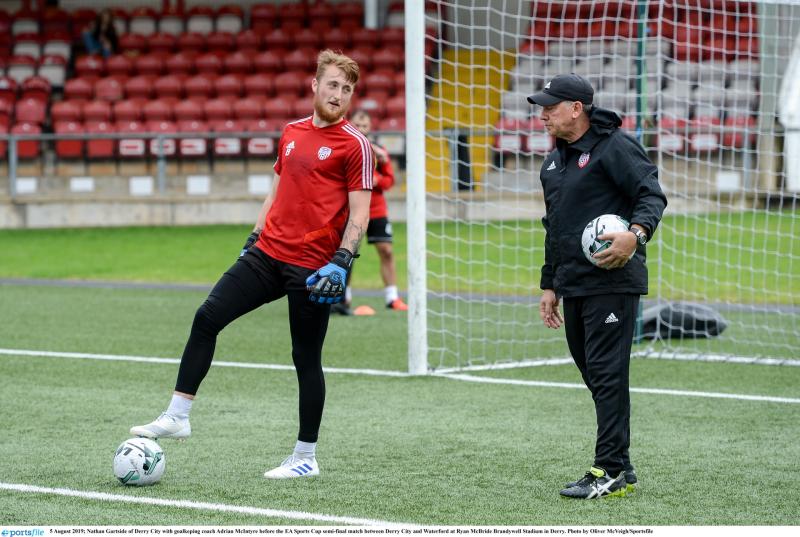 Nathan Gartside has hailed his penalty shoot-out heroics at Drogheda United last month as ‘a significant moment’ personally after a difficult start to the season as Derry City’s new number one.

The 23-year-old has stepped up to first team goalkeeper this season after two and a half years at the club, but it has been far from plain sailing, with the goalkeeper suffering some uncomfortable moments, most notably when Shamrock Rovers’ Graham Burke beat him from the half-way line at the Brandywell back in April.

But he has bounced back and proved himself capable of holding the weight of that number one jersey, and his finest moment came when he saved two penalties in the shoot-out victory at Drogheda in the first round of the FAI Cup last month. Gartside’s saves sent Derry through to the much-anticipated tie with Finn Harps, and he admitted it was an important day for him after a difficult spell.

“You could say it was significant for me,” he said.

“Everyone knows that it was a sticky start to the season for me and the team, but since then I’ve been trying to play pretty consistent. There were a few teething problems shall we say at the start because my last league game before that was 17 months earlier, which is obviously a long, long time. If I’m being honest it caught up with me at the start of the season and a lot of background stuff was going on that I’ll not get into but it was playing on my mind and I just needed an arm around the shoulder.”

Gartside also singled out City’s goalkeeping coach Declan McIntyre for supporting him during those difficult months.

“Declan was massive for me during that period,” he explained. “Every goalkeeper goes through those times when things don’t go your way, but Declan and the staff kept reassuring me and telling me it would come and thankfully it started to shift for me after that and I’ve been growing in confidence since then and ultimately now I’d like to think I have been consistent over a long period of the season.”

That game at United Park set Derry City on their way to their best run of form this season, five successive victories which have opened up unexpected possibilities for the Candystripes ahead of their trip to Finn Park. Two red cards, a 95th minute equaliser and a penalty shoot-out; it could easily have gone another way.

“It was one of the warmest days of the year,” Gartside recalls. “It was a hot day and it was a rollercoaster of a game, but the main thing was we got through. It doesn’t really matter how you get through as long as you stay in the cup. Getting the late goal obviously knocked the momentum off Drogheda and this time again we just want to get through no matter what happens.

“Obviously the start of the season didn’t show that and we were all disappointed but since Ruaidhri has come in and the new management teams, there has been a complete change in confidence and the guys have been really buying into everything we’ve set out to do. It’s been showing in the performances and the results.”

With City facing Harps and Shamrock Rovers facing Bohemians, some big names will be knocked out of the cup in the second round, and Gartside is determined to do his part to help the team go as far as they can in the competition this season.

“One of Rovers or Bohemians will have to go out and that will give a good opportunity to someone else, but at the same time we believe we should be with that calibre of team,” he said. “We shouldn’t fear no team in the cup, especially in the form we’re in. We want to go far and bring a bit of silverware back to the Brandywell and the Derry fans.”