Ruaidhri Higgins delighted with his team after Drogheda victory 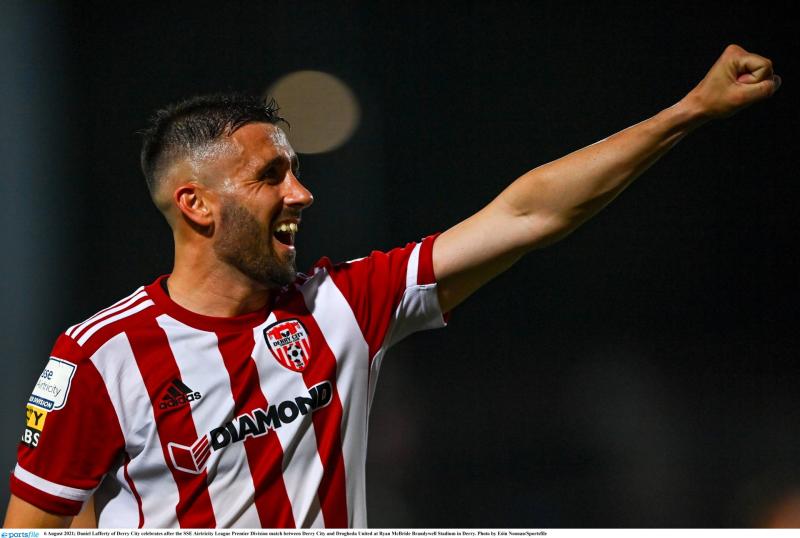 Ruaidhri Higgins admits he had a word in Danny Lafferty's ear about not scoring any goals just a few weeks ago.

The former Sheffield United defender has been playing more of a wing-back role for Derry this season, but had not scored any goals in 19 appearances until he stepped up to take a 95th minute penalty at Drogheda just two weeks ago. Since then he has been unstoppable, with a goal against Longford followed by two more against Drogheda last night to take his tally from 0 in 19 to 4 in his last 3 games.

Lafferty's goals helped City to a third successive win and manager Higgins was thrilled with the efforts of his players.

“I got on to Danny a few weeks ago for not scoring any goals and I’ll have to keep getting on to him,” he laughed.

“It’s a very good team performance and I think the manner in which we won the game is the most pleasing thing. They look really solid and considering that our skipper was missing, I thought we looked really, really solid defensively. The players we brought off the bench did really well also so it’s a real team performance and I’m delighted with it.”

Higgins was also delighted at the performance of Jamie McGonigle, who scored his first goal for the club on his first start.

"He’s a proper player, but he’s not fit," he explained. "He’s been very stop-start since he’s been here. He only trained his really, but we put him in and he’s got an absolutely brilliant goal and that’s a Jamie McGonigle goal, and if he gets service, he’ll score goals.

"I think he has shown in 75 minutes a really good performance, but I’m excited to see him when he gets a couple of games under his belt. I think our midfield players enjoy playing with that type of player as well because his movement off the back of defenders is very good and I think he is a lethal finisher and he’s hungry for goals. He has signed a long-term contract and I think he’ll score a lot of goals here."