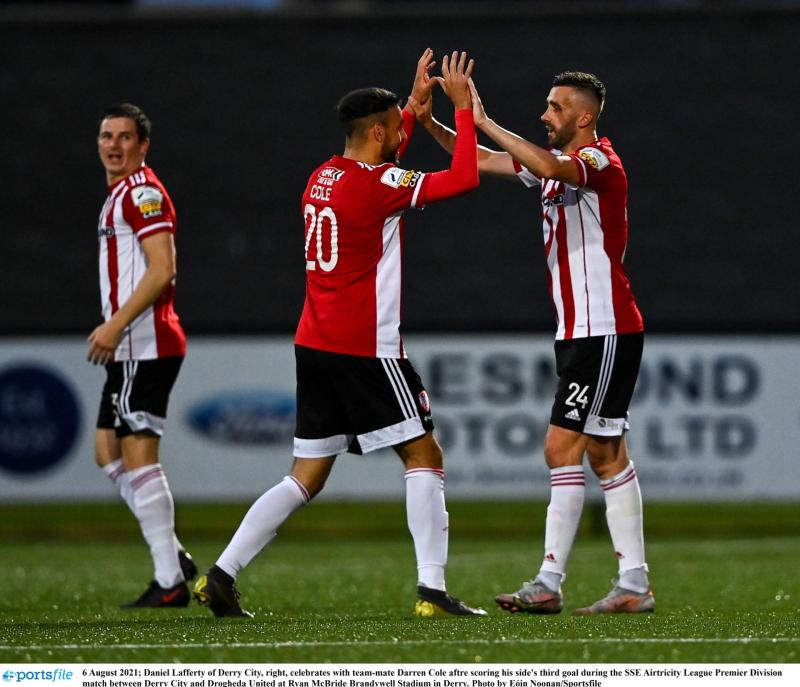 Danny Lafferty made it four goals in three games as his second half double helped Derry City to a dominant win over Drogheda United.

Just two weeks ago, Lafferty scored a 95th minute penalty at Head in the Game Park to deny Drogheda passage into the second round of the FAI Cup, and he frustrated Tim Clancy’s side again with two brilliant goals.

This was a one-sided game throughout and it began when the lively Jamie McGonigle, on his first start, scored his first goal for the club on 39 minutes, latching onto Joe Thomson’s pass before drilling the ball past David Odumosu.

Two goals in nine minutes then ended the game as a contest. Joe Thomson was unfortunate as his well-struck volley was brilliantly pushed over the bar by Odumosu. From the resulting corner however, Drogheda couldn’t clear and when the ball fell to Danny Lafferty, he took it down before placing it past the Drogheda goalkeeper and into the net for his third goal in three weeks.

Lafferty wasn’t done there however and he saved the best for last, as he made it 3-0 just nine minutes later with an outrageous effort from wide on the left which caught Odumosu off his line as it flew into the top corner.

It was almost 4-0 in the closing stages as substitute Will Fitzgerald saw his shot beat Odumosu, but the ball hit the inside of the post and somehow stayed out. Nonetheless, it was an enjoyable night for the home fans, over 1,00 in all, as Derry City moved up to fifth place in the Premier Division.