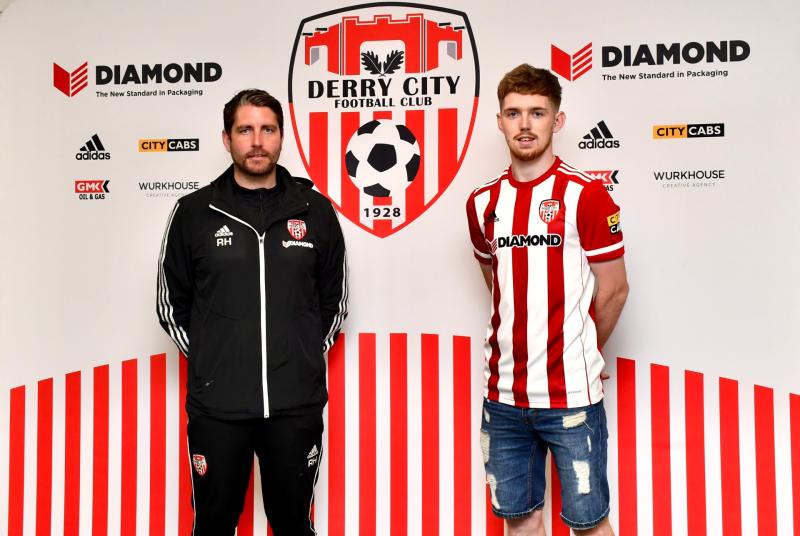 Ruaidhri Higgins has acknowledged that Derry City have made ‘a big statement’ by signing Jamie McGonigle on a three-and-a-half year contract.

The 25-year-old was unveiled as a Candystripe today, with Higgins an admirer since playing alongside McGonigle at Coleraine over five years ago.

The striker was much-coveted with Larne and Coleraine making Crusaders offers for the player, but Derry City have won the striker’s signature, with an undisclosed fee, much to the manager’s delight.

“I played with Jamie back in 2015/16 and he was only breaking through at Coleraine,” he said. I could see then what a bright talent he was. He was a lethal finisher even back then but obviously his all-round game has developed over the last number of years and I still think he has his best years ahead of him.

“He’s only 25 but he’s very, very experienced for his age and someone who I am absolutely delighted to bring to the club for a lot of reasons. The main one is that he is a really, really good player with a good age profile and he lives quite local. I always said I wanted to bring someone from Limavady to the club but there’s not many around so we had to go to Dungiven.”

McGonigle significantly strengthens Derry City’s attack, and Higgins has no doubt that McGonigle will be a success at the Brandywell.

“I have absolutely no doubt that he will succeed in the League of Ireland otherwise I wouldn’t have gone after him the way we did,” he explained.

“Jamie will score goals, he’s quick and he makes good runs off the back of people, he uses his body well and he can finish with both feet. I don’t care what league it’s in, if we create enough chances he’s going to score goals no doubt about it.

“I don’t think you can achieve anything unless you’ve got competition throughout the pitch. We’ve added Jamie to a real key area of the pitch for us. Don’t forget he hasn’t played for four or five weeks, so we need to be careful how we introduce him to the team, but he’s a fit lad and over the next week or two we’ll get him up to speed and get him ready to play.”

Higgins was also grateful to the club for supporting him to get the deal done.

“Everyone was aware that there were clubs interested and I personally want to thank Philip O’Doherty, Sean Barrett and our Board for the backing on bringing him to the club and I’m sure our fans will be excited going forward,” he added.

“It is a big statement. The club have been great to me and I think that everyone understands that to build a club and to be successful long-term that this is the way you have to go. Jamie it’s the age profile and the all-round profile of the type of player we are looking to bring here.”