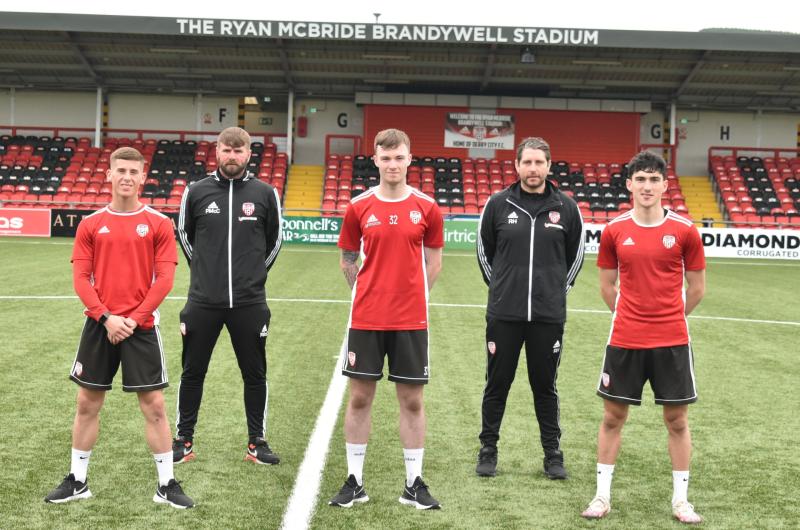 It has been a busy day at Derry City with the club announcing that several Academy players have signed their first professional contracts at the club.

Caolan McLaughlin, Brendan Barr and Evan McLaughlin have committed their futures with the Candystripes. The trio have all been in and around the senior squad this season and were delighted to put pen to paper after speaking with Ruaidhri Higgins this week.

McLaughlin has made six substitute appearances this season, while Barr has made eight overall, including three starts.

The Manager was full of praise for the hard work that the players have been putting in since he arrived at the Brandywell and said this was clear evidence of the opportunities that were available to young players at Derry City.

"The board and myself have always been clear that developing our own players was a huge part of our long-term plan. Caolan, Evan and Brendan have worked really hard to get to this point and know that there is an awful lot more hard work ahead of them."

"The opportunity is there for all our young players and I would like to congratulate everyone involved at the club's Academy. That's now seven of our first team squad who have come through the Academy in the past two years which speaks volumes for the effort they're putting in."

Higgins was also lavish in his praise of the local football scene in general and in particular of Foyle Harps, where these three players had played their youth football. Academy Director, Paddy McCourt, also added his gratitude to his own former club who had played a key part in the players' development.

"Foyle Harps have been brilliant to work with and I know Gerry Doc and those in charge at the club will be pleased to see these lads sign professional contracts" said the former Celtic man. "It's a club I've been involved with for a long time and indeed my own son is playing there now.  I have many good friends there and they take a lot of credit for the part they played in these lads' development."

"That relationship, not just with Foyle Harps but with all clubs in and around the North West, is essential for the future of senior football in the city. There is a clear pathway now for players coming into the Academy here and we will continue to work to develop that."

"It also shows the rest of the lads that the opportunities will come if they continue to apply themselves and put in the work. I wish Caolan, Brendy and Evan the very best as they start out on their professional careers."