Rainey U21s shine in the sun 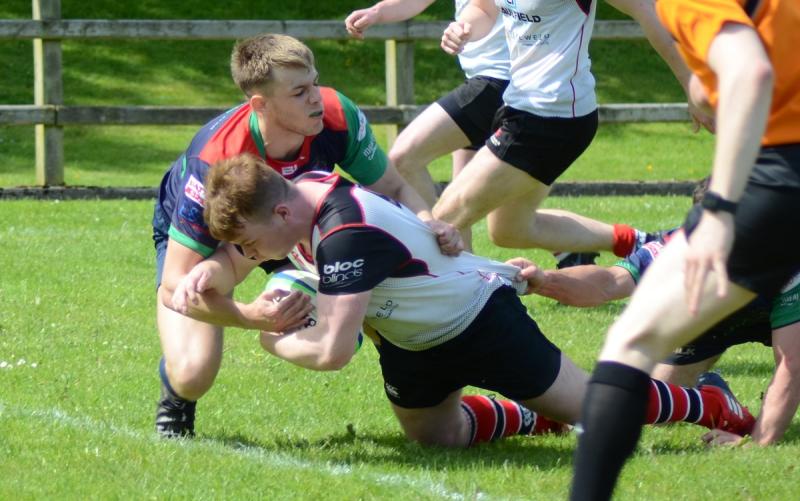 In glorious sunshine the youth teams entertained their counterparts from local rivals Dungannon in the morning, before the newly constituted U21s took on Clogher Valley for the Derek Lee Memorial Trophy.

In a game that showed more passion and commitment than skilful rugby, the result was in doubt until the very end, a last gasp try from Rainey denying the Cran men a victory few could have quibbled about.

With the game scheduled to be three 20-min periods, Rainey started well, but the Clogher team, with several matches already under their belt, were well organised in defence.

Their back row in particular were voracious at the Rainey ruck, and several superb turnovers resulted in Rainey being pushed back briefly into their 22'.  A swift exit brought play back into the Valley half and a Rainey turnover by flanker B Hall
sent No8 S Hastings charging into the opposition 22'.

With the Rainey pack in full flight, quick ball allowed out-half G Hall to scythe through the defence carrying play to the 5m.  Scrum-half Lloyd-Evans almost crossed the line, but a ruck between the posts saw the ball passed left to G Hall, who stormed over for Rainey's opener. Lloyd-Evan's conversion ricocheted off both up-rights, but failed to cross.

The restart saw a superb aerial take from McCusker, and when Rainey cleared their lines, another turnover by flanker N.Hastings allowed him to cut through up the middle of the park.

With the Clogher defence wide open, once again handling errors saw the move break down.  A huge clearance kick by the Clogher winger was well-fielded in his own 22' by winger Mulholland.

Rainey attempted to run it out, but were forced to kick, and Clogher countered strongly down the left.  With Rainey in real
trouble, a Clogher charge at the posts was halted by a great steal by out-half Hall, but the visitors were not to be denied and crossed in the corner shortly afterwards to tie the score.

The Rainey U21 squad.

Rainey's response was immediate.  Some strong running by the backs brought a scrum in the Clogher 22'.  Rainey went through the phases, tying in defenders until an opportunity opened up for second-row Bresland.  Charging for the line, he was hauled down 5m short, but popped the ball up to hooker McGlone in support who crashed over.  J Hastings was unlucky with the conversion.

Typical of the see-saw nature of the game, Clogher were next to score, and when they added the conversion Rainey were behind for the first time in the game.  A great take by McCusker from the restart gave them another opportunity to attack, but the constant changes in personnel didn't help and the second period ended with neither side gaining the ascendency.

Starting the final 20-min period, Rainey attacked strongly, with flanker C Lawrence unlucky not to force a turnover.  Clogher counterattacked swiftly down the left wing, a last ditch tackle by McIlroy saving Rainey's blushes. Another fine steal by B.Hall in the middle of the park gave Rainey possession, and suddenly it was all Rainey.

McCusker carried strongly up the middle, but Clogher were defending like men possessed to maintain their lead.  Unable to get out of their half, they soaked up every attack Rainey threw at them.

With a penalty advantage coming G Hall was just wide of the mark with a snap drop-goal, but well off target with a penalty attempt a few minutes later.

A great take by front-row A Thornton at the back of the lineout, left him wide open to carry play into the 22', but once again Clogher held firm.  They mangaged a long kick deep into Rainey territory, but winger Speers was back to cover and counterattacked to bring play back to the Meadowbank End.

With the clock ticking down Rainey camped in the visitors' 22' but were unable to make it over the final 5m.  With the visitors' defending becoming more frantic, and the tension rising, a Clogher front-row eventually saw yellow for repeated infringements at the ruck.

An uncontested scrum saw Rainey go right, with Molloy getting to within 2m, and when they went back across the park, prop C.Smyth was on hand to power towards the line before stretching to place the ball on the whitewash between the posts.  With Lloyd-Evans adding the conversion, the score finished Rainey 17-12 Clogher Valley.

As an end to the 'season-that-never-was' this was a great afternoon's entertainment for the enthusiastic support.  Obviously missing game time, there were multiple mistakes on both sides, but their work rate and competitiveness was a credit to them all.  Roll on the new season.