Aoife McGough hoping for historic year with Steelstown and Derry 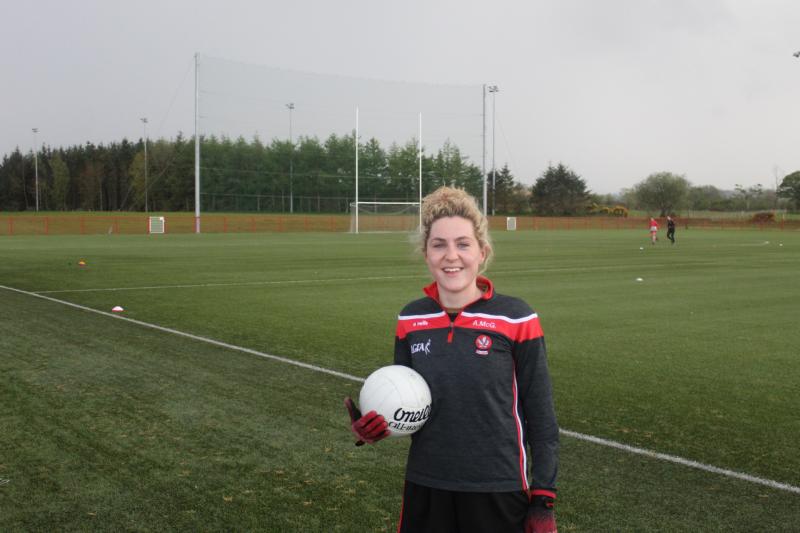 The shirts may be red and white but there is a blue streak to the Derry Ladies panel this year, as they prepare to face Antrim in the league opener at Celtic Park next Sunday.

New manager Odhran McNeilly and coach Benny Marron have already made their presence felt as the new season approaches, a number of key changes altering the way the girls approach training and the games themselves, both individually and collectively.

Vice-captain Aoife McGough has seen it all first hand, the 25-year old almost a veteran at this stage, such has been her involvement over the years. A county champion with Steelstown in 2020, Aoife was as frustrated as anyone when lockdown prevented a run at Ulster, but she has taken that setback in her stride, and, under the new management, she feels that there are now no limits for the girls in 2021, at both club and county level.

“There’s a completely new set-up with Derry this year, completely different to any other year,” she explains.

“This year it feels as if there is more pride in the jersey, just because of the set-up from the start. There has been great management from the start but there has also been trials, and everyone has been working really hard at training to prove to this new management that they are good enough.

“They are from outside Derry so they have no idea what your name is and what club you play for; they don’t care about any of that whereas in previous years it’s always been starting based on knowing a name, but it’s just a clean slate for everyone this year. You need to prove yourself, and it does give you more pride in the jersey when you’ve earned it.

“After training, we’re getting food and stuff which is the first year we’ve ever had that. The management have brought that and there have been plenty of changes this year, and there’s a really good feeling about Derry this year as well.”

It has been a long wait for Aoife and her team mates. She helped create yet more history with Steelstown when they defeated Ballymaguigan to win the senior county crown at Celtic Park last October, before dominating Monaghan Intermediate champions Magheracloone in Ulster. That set up a quarter-final meeting with Carrickmore, but the game never happened because of Covid, and as the weeks passed, it became apparent that it never would. Steelstown had momentum.

It was such a short season last year and after the success we had with Steelstown we were devastated at how it ended with not getting a good run at Ulster,” Aoife admits.

“We were really going for it and we had a good set up for it and we really did, as a whole panel, that we could win Ulster or really give it a good go anyway.

“We have all regrouped as a panel and there’s the same mood about the place this year; the spirits are still high and there is still that belief about us that we can go on and do it. Seb (Crudden) said the other night at training, and this really stood out for me – no-one remembers a team that just won one Championship here and there.

“We really are pushing on this year to prove that we can do it and we did deserve our place in Ulster. We weren’t there just by chance, we were there to give it a good go. And it’s just great, having been locked up for so long, that we are now getting back onto the pitch. When you’re back out playing now, it doesn’t feel as if you were ever away.” 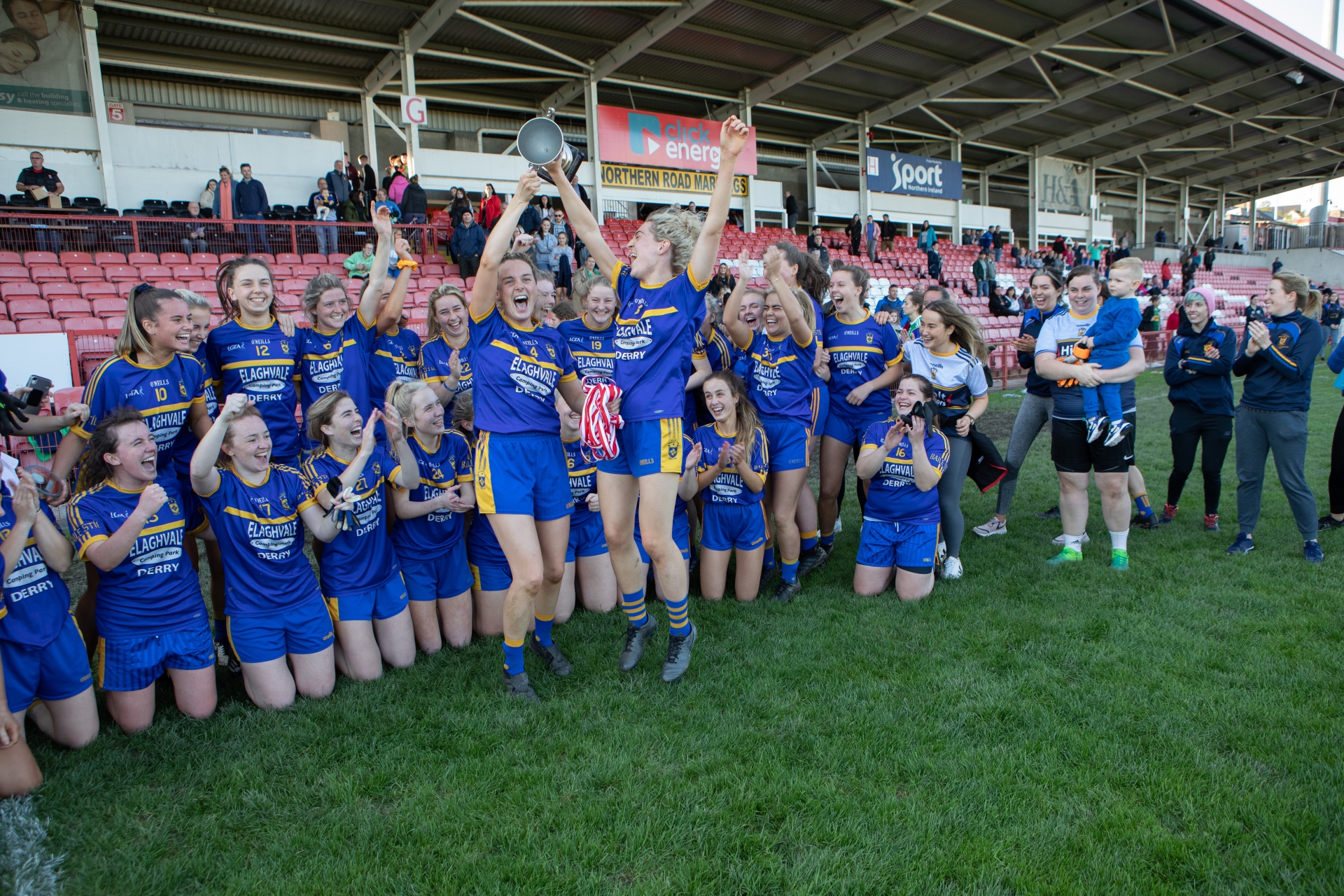 That blue streak which runs through the Derry panel this year is the significant number of Steelstown girls included, 10 in all. Moneymore, Ballymaguigan, Ballinascreen, Glen and Limavady are all represented, but Brian Ógs dominate.

“I see more of them girls than I see my family at the minute without a doubt,” Aoife laughs. “It is about a lot more than the Gaelic so when you go out on the pitch with them it’s great.

“We just have so much respect and friendship with each other that you really want to do well for each other. We have so much respect for the management as well which makes a difference We don’t just go out and go through the motions. We are out there because we have pride in representing your club and county.”

Aoife is now a full-time optometrist with Specsavers, and, at 25, is at an age, where the world is her oyster. She is often asked how she manages to fit everything in to her daily schedule.

“There’s a lot of sacrifice. People in work ask me how I do it, how I play for two teams and work full time. It don’t think of it like that. I don’t do this because I’m forced to do it. My social life and my friendships are football as well.

“It’s not all plain sailing because there are sacrifices, but you do it because you love it. You can’t be expecting to win Championships with your club or going for an Ulster with your county if you choose the pub over your training, it just doesn’t work like that.”

Antrim, Louth, Leitrim await Derry in the league this year, all ahead of the big Championship clash with next Sunday’s opponents, all a bit ironic considering the squad is now coached by two Antrim men. Traditionally, the Championship has been the be all and end all, but as already suggested, the mindset is different this time, with a win next week at Celtic Park hoped to be a sign of things to come.

“It’s a big game,” Aoife agrees. “We beat Antrim in the Ulster final in recent years; it will be a big game so hopefully everything we’ve been working on in training comes together on the pitch.

“We played Tyrone and Fermanagh in Challenge games and that’s even a set-up that we’ve never had before. Everything’s been recorded for the first year ever and we’re working on things that didn’t work in those matches. It’s just about brining it all together on the pitch. Ten minutes here and there against Antrim won’t work, we have to come out from the start.

“Derry has never usually thought about the league. I remember in previous years it has just been an attitude of going out and playing the league and then we’ll worry about Championship. This year we don’t want that, we want to give it a good rattle, as hard as we can from the start.

It will be a short season again so next Sunday is the focus and that’s what it’s all about.” 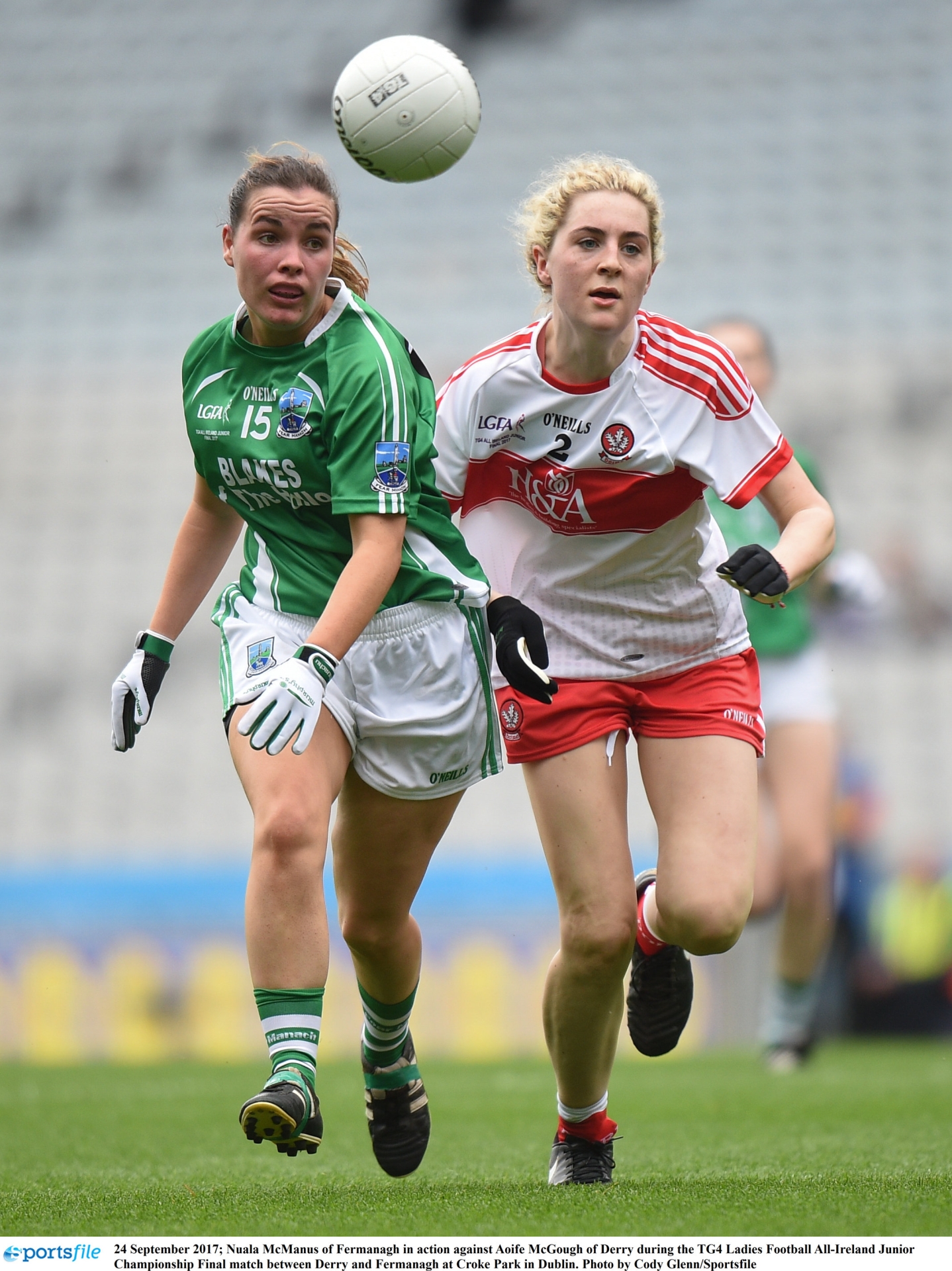 Aoife has never been too far away from success in her Gaelic career, and last year’s Championship win has only made her hungrier for more. A self-confessed bag of nerves before games, she nonetheless is aiming high. Why can’t this be Derry’s year?

“I have been lucky enough in my football career to win a few Championships with school and Steelstown but I still get as nervous as ever,” she reveals.

“I am awful with nerves. I don’t just expect to win; I always assume the worst, but now that you have that taste of winning, it does make you so much hungrier, you want to train harder and work harder and encourage the girls. I don’t expect to win, there’s still a long way to go with that.

“But I’ve always had the belief that it’s there for the taking with Derry, it’s just that wee missing piece or something that didn’t click, but I really think this year the talent is there within Derry so hopefully we can push on and give it a good go this year. If there’s ever the year, I feel this is the one hopefully.”

Whatever happens next Sunday, Aoife will be surrounded by girls who have experienced the highs and lows alongside her along the way. It could be lashing down at Celtic Park, or the heat could be a killer, but there really is no place she would rather be.

“Some of my closest friends I’ve met through football,” she reflects.

“Sometimes I sit down and think this is such a big part of my life. You do it because you love it. We always say at training that the things you do in the dark, the things people don’t see you do, you have to make them count when you go out onto the pitch. That feeling when you win is something else as well.

“There are some days, like the fifth day of training when you’re thinking ‘What am I doing this for?’, but then you quickly catch yourself on and you realise you’re doing this to represent my club.

“You walk around the club on a Wednesday and you see all the wee ones there training. It’s just amazing and you say ‘This is what I do this for’. I know it sounds cliched but you really want to do well.” 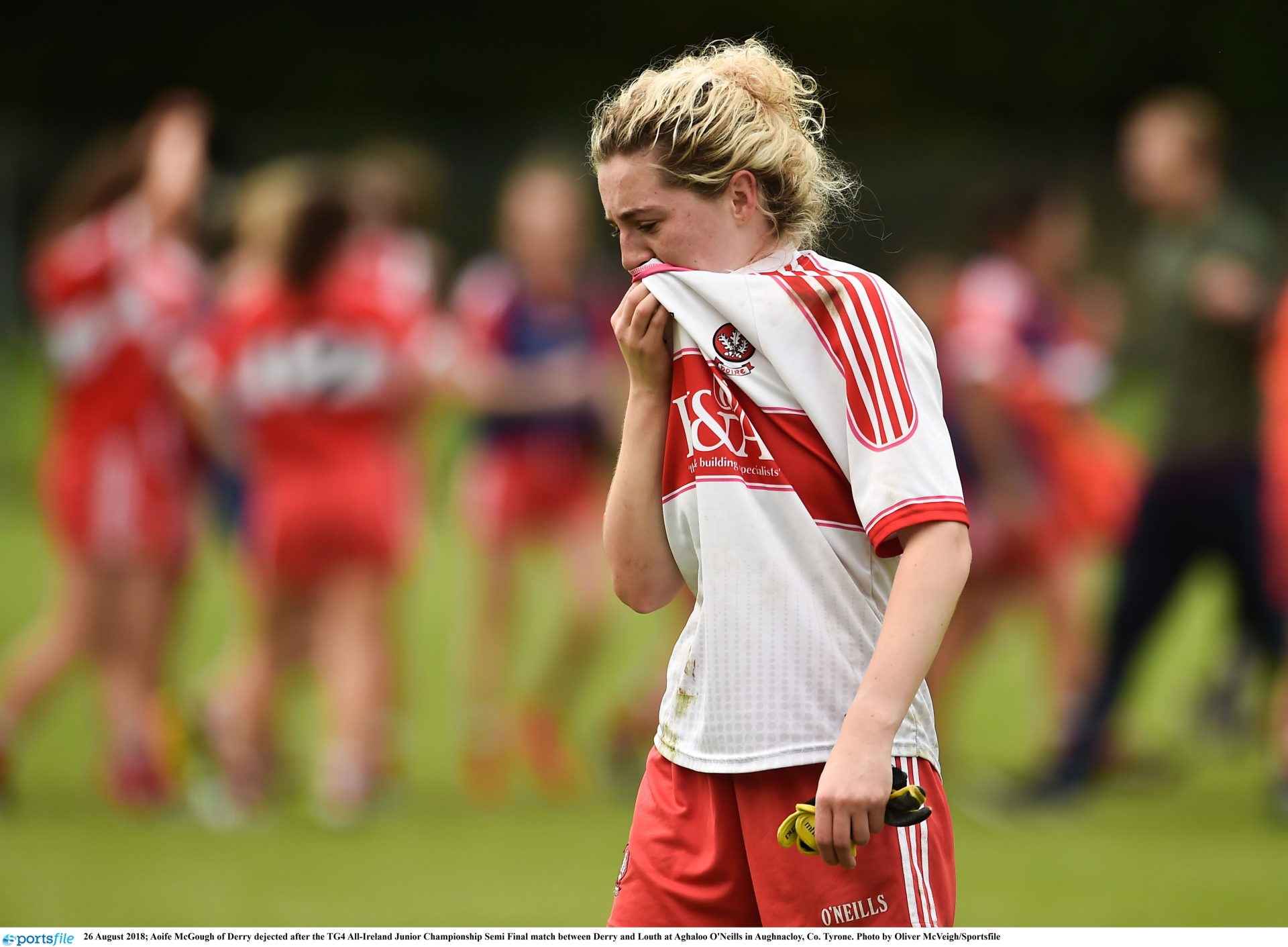