A racing star for the future: Meet Magherafelt's Fionn McLaughlin

Teen kart champion appeals for sponsorship to compete at world-level 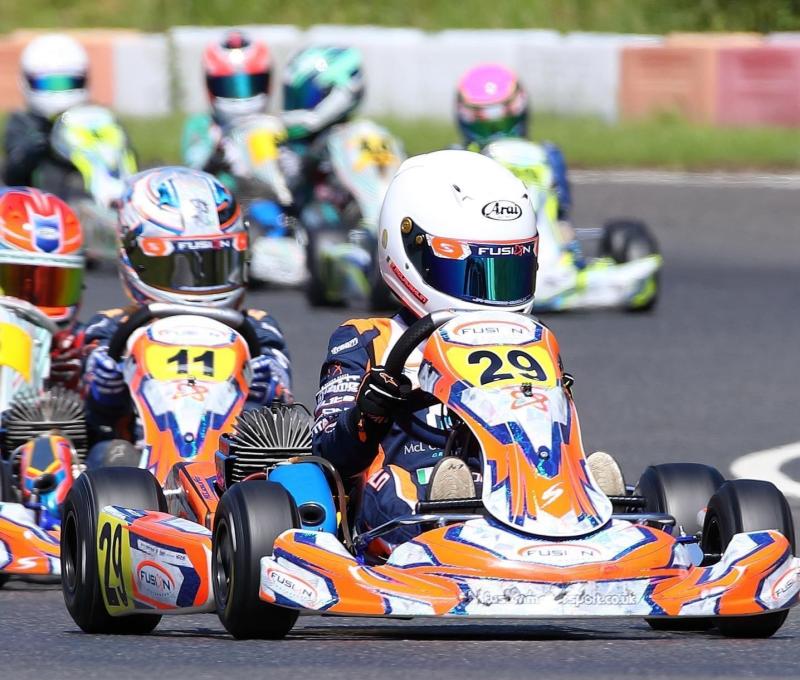 A Magherafelt teenager with the potential to become the next Lewis Hamilton is appealing to local businesses for sponsorship in a bid to achieve his sporting dream.

Fionn McLaughlin (13) from Magherafelt has been kart-racing since the tender age of three and has amassed a range of trophies and titles, racing across Ireland, the UK and Europe. This summer, he caught the attention of top Italian talent scout, Dino Chiesa, who has discovered some of the world’s best drivers, including Lewis Hamilton and Nico Rosberg.

Invited by Chiesa to race with his team in Italy, Fionn travelled there in September, where he finished in the top ten in every race. This was despite driving on a new track against more experienced and older competitors, with around 70 drivers participating in each race.

“At the time I didn’t really think about it,” said Fionn. “I just wanted to get on the track. It was great but I didn’t want to get too happy in case nothing comes out of it.”

His dad, Martin McLaughlin, said Fionn performed “really well” in Italy, where he spent a week driving at the Adria International Raceway.

“Fionn did so well they invited him back to another race weekend, at the Castelletto Circuit,” said Martin.

“The team he raced with was Dino Chiesa’s World Championship-winning race team, Kart Republic. He won a race, finished second in the two finals and was fighting for the lead in both of those finals.

“He was one of the fastest drivers most of the weekend. He’s more than proved himself as a talented driver – now he just needs someone to back him to continue to the next level.”

Indeed, sporting talent alone is, unfortunately, not enough for a young racing driver to succeed at World Championship level. Top scouts might want to work with Fionn and will put up hundreds of thousands of pounds to do so, but they also expect their drivers to provide some of the funding. This, said Martin, is impossible for an ordinary family to do, as it requires an investment of up to £50,000 from Fionn’s side.

“Each team is prepared to invest around 70 percent but they need you to fund the rest,” he said. “That 30 percent is a lot for a working-class family to stump up, along with all the travel costs on top of that. He’s at a point now where it’s just not possible to move to world-level without sponsors.”

As well as the interest from Chiesa, Fionn has also attracted the attention of a few other racing teams, who have enquired about working with him in 2021. Unless he gets some sponsors, however, he could well miss out on these opportunities.

A spokesperson from a world-level team responsible for helping launch the careers of more than a few F1 champions, said they had seen Fionn’s potential and could “do a great job with him.”

“We are ready to invest a lot of money in him,” they added. “You have a proposal in hand from the Factory Team that made Hamilton and Verstappen win in Karting, one of the greatest manufacturers in the world.”

“It would mean a lot to get sponsors because then I could compete in other countries and work with these teams, said Fionn.

Although COVID-19 restricted racing, like many things, this year, Fionn still managed to enjoy a good season in 2020. He raced in both Europe and the UK, including the UK’s biggest circuit, the MSA Kartmasters Grand Prix, which has seen the likes of George Russell and Lewis Hamilton race. In September he also competed at the IAME Euro Series in Essay, France, where he qualified pole position for the final and went on to win both the pre-final and final races in round two in Castelletto, Italy.

Training every day before school and whenever else he can fit it in, Fionn is dedicated to pursuing his dream career, although he is realistic too.

“If I don’t make it as a racer then I have to make sure I’ve worked hard on my schoolwork,” he said. “My biggest challenge as a driver is to consistently get good results and then hopefully the right people will notice me.”

If you’re interested in sponsoring Fionn in his karting career, you can contact Martin McLaughlin at martin@infomcl.co.uk or call 07801832477.