'The mistakes today cost us, it's as simple as that' 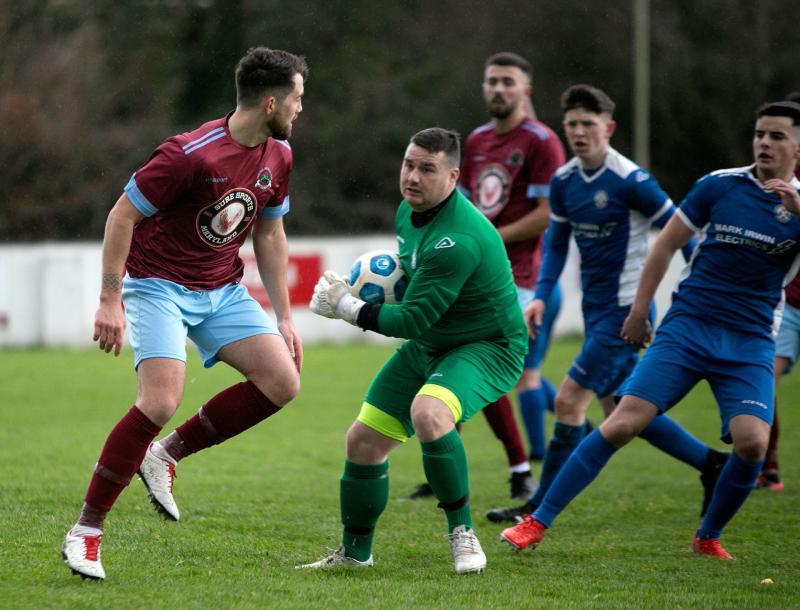 Limavady United goalkeeper Conor Brown gets to the ball ahead of Institute striker Alex Pomeroy. Pic by Tom Heaney, nwpresspics

Sean Connor acknowledged that individual errors 'killed' his side as they fell to a disappointing defeat at Limavady United in the semi-final of the Northwest Senior Cup.

'Stute started well in the game but conceded the first goal just four minutes in when Caolan Brennan gave the hosts the lead.

It stayed that way until half time when the rain finally stopped and 'Stute began to play.

They equalised early in the second half when Alex Pomeroy headed home from close range, but they fell behind again quickly when McFadden's tame effort somehow slipped through the legs of goalkeeper Rory Kelly and ended up in the net.

Dean Brown then made it 3-1 when he raced away from Seamus Sharkey to finish well, but 'Stute got back into the game when Ahu Obhakan scored a screamer from 30 yards.

'Stute then gifted Limavady another goal when Sharkey fouled Gary McFadden and Brown scored his second from the penalty spot.

Brown had the chance to complete a hat trick in the final minute when Kelly gave away another penalty, but he blazed his effort over the bar.

"It was a difficult pitch to move the ball quickly on. We played well in patches but three individual errors killed us for the goals.

"If you are going to concede silly goals like that and make individual errors, you're not going to win too many football matches. I wouldn't expect those errors to be there regularly.

"Their goals all came at a time when we were getting on top in the game. I'd rather learn that lesson here today, because the conditions of the pitch was like some of the grounds we will visit this year. We've had a good lesson today, but I'll not be too harsh on the players. They've done really well in an extended pre-season and the morale was high coming into this game.

"The mistakes today have cost us, as simple as that.'