Nathan wants to be the new number one at Derry City

Gartside ready to step up after Peter Cherrie's departure 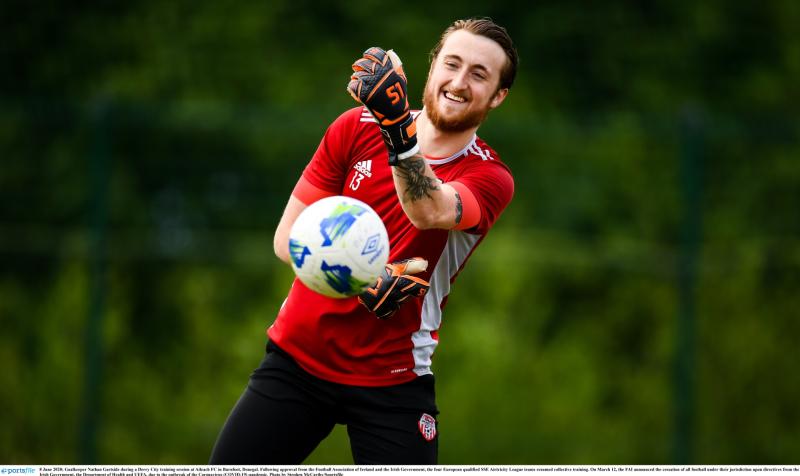 Nathan Gartside is hoping to persuade Declan Devine that he is ready to be the number one goalkeeper at Derry City.
The 22-year old has been at the club for since the autumn of 2018 and has made only 6 appearances in the first team.
The former Watford goalkeeper has had a tough time off the field in recent years due to illness, but he has found stability in his life thanks to his hometown team and is now ready to make the step up to number one following the departure of Peter Cherrie.
Gartside admitted that he and the manager had already talked about the possibility.
“You always respect the manager’s decision,” he said.
“We’ve had conversations which will stay in house, but he said over the off season it’s important to me not to slack off if I'm called upon.
“I don’t have that type of attitude anyway; I’ve been working hard in the gym every day and I’m fighting fit.
“Since I’ve got my head back into the game, I’ve had to control a lot of things about me, especially weight and strength.
“Obviously with Pete leaving, the door’s open, so when we had the conversation, it was said if he puts his trust in me don’t make him regret it and keep my standards high like I do in training.
“Ultimately, it’s up to me to make sure I get the opportunity and if I do, I take it.”
Gartside worked with Cherrie for two years and formed a close bond with the veteran goalkeeper, picking up plenty of helpful tips along the way.
“Last season was a difficult year for everyone at the club because we underachieved but Pete has been a big figurehead in our successes over the last two seasons since I’ve been in the fold,” he continued.
“He has helped me being able to manage it, how to watch someone week in and week out, knowing how they train, how they react and someone to idolise.
“He came in at a time when Kenny Shiels left and they were very few players. Gerard (Doherty) had just left and Pete came in and stabilised it all. We had a successful first year and Pete was instrumental in that.
“He helped me improve as a professional. When you’re a number two, you’re trying to learn what you can put into your game and over the last two years, especially coming back from England, he was instrumental in everything.”
Gartside and Jack Lemoignan are seemingly the future of goalkeeping at Derry City, and despite moving elsewhere, Cherrie has promised to always be there if needed, for both players.
“It’s difficult being a goalkeeper because there’s only one position but at the same time as a goalkeeper union, you like to keep a nice tight group,” Gartside explained.
“Pete has always said to me that if I ever need anything pick up the phone and give me a call. It happened a few times during the two years, especially being so young and trying to manage things.
“We had a healthy relationship and a healthy friendship, and he said to me before he left at the end of the season, that regardless of what happens, his phone is always open and I said the exact same.
“It’s been a great two year working with him, he’s a top pro.”