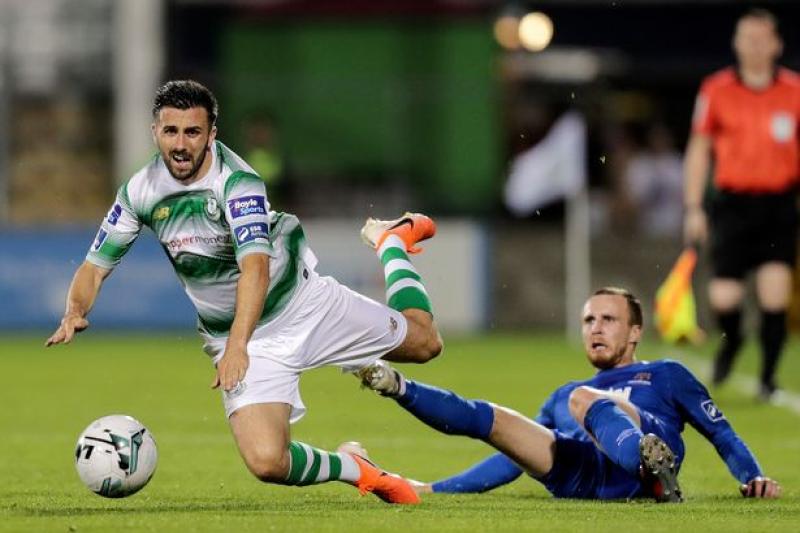 Danny Lafferty has come up against some big names in his career so far, but he could soon be rubbing shoulders with the one and only Zlatan.

Shamrock Rovers have been the talk of the town in recent days after an incredible Europa League draw paired them with 7-time European Cup winners AC Milan at Tallaght.

The aura of the Rossoneri remains to this day and they will arrive at the home of the Irish champions-elect in a fortnight expecting to progress against a side who are minnows in comparison.
Shamrock Rovers remain Ireland’s most successful club however and ten years after giving Juventus a decent showing in the Europa League, they hope to do so again, and Lafferty hopes to be a part of it.

The 31-year old has found games hard to come by this season, but has still stepped up when it mattered, scoring a penalty in the Europa League shoot-out against llves before scoring two goals against Cork City earlier this week to take his team to the FAI Cup quarterfinals. He may be behind Neil Farugia in the pecking order at Tallaght but he has shown manager Stephen Bradley that he can contribute, and significantly, when called upon.

“It’s been a long time since the club has had a marquee fixture as we have now coming up on the 17th against AC,” he agreed.
“I’ve read on social media how it’s something like 10 years since we played Juventus. It’s kind of ironic that it’s another Italian giant with huge European history coming to Tallaght. It’s just a shame that there won’t be 7,500 fans there. It would have been packed out and probably would have sold out twice over.

“That’s probably the only downside to it, but it’s AC Milan coming here so I don’t think any other player would need motivation for that. It will be a huge game and one of the reasons why you want to be a footballer – to play in these types of games. When AC Milan comes to town everyone wants to play these games so it’s one we’re all looking forward to.”

Lafferty has always been a goal-scoring full back, as his time with Sheffield United and Derry City can attest, but he picked the perfect time to score the first brace in his senior career to show his manager that he has a side to his game that not all defenders can bring.
“It was very good to be part of the game against Cork,” he said.
“I’ve had to be patient down here because I’ve not played maybe as much as I would have liked but that just shows the strength in depth in the squad that we have and the competition for places.
“Because we play a unique formation, you’re competing for one position – there are a number of wingers and people who are more full-back orientated as well.”

Magical nights
Shamrock Rovers have had some magical nights in Europe over the years, having faced the likes of Manchester United, Bayern Munich, Juventus and Tottenham, with Milan now the latest big name to meet the Hoops on the European stage.
With this season’s competition reduced to one game shoot-outs rather than the traditional two-legged affair, Lafferty believes it is now more of a level playing field.

“I think to be honest, it probably wasn’t the tie we wanted," he admitted. "There were three possibilities; one was the team that beat Bohemians, and the other was from Hungary I think. We were probably going in hoping not to draw AC Milan, and if that was the case, then to be honest we probably would have preferred to be drawn at the San Siro.
“We feel it might give us a slight advantage in the sense that they haven’t played in a competitive game in a while and it might feel a bit flat, like a bit of a pre-season game for them, so we might actually catch them a little bit cold."

The Milan draw comes in the midst of Shamrock Rovers racing towards a first league title since 2011. Only Bohemians are in a position to stop them running away with it, with both teams set to meet this weekend in a huge Dublin derby. There has rarely been a better chance for Rovers to become champions.
“I think everyone’s confident,” Lafferty said. “The strength in depth of the squad is good and the competition for places is healthy in a sense. It might be a cliché in football but we just have to take it one game at a time.
“Every week there is a different challenge – there was the European game last week which went to extra time and penalties and it was a crazy old game. Then there was the FAI Cup and next we have Bohemians and Dublin derby. It is a case of taking it one game at a time because you have to respect what each team is going to bring.
“We all look at the table and we know how big a game Saturday could be, for ourselves and the fans. There are nine games to go and it probably is one of the best chances that Rovers have had in 8 or 9 years to win a league.
“We are all very aware of that, but if we take it one game at a time, keep ticking them off and get back to winning ways, because we have had back to back draws in the league which is disappointing.
“Saturday will be a different challenge and if we go through that and get the three points we’ll be in an even better position.”