"This is a seminal moment in the well being and even existence of professional football on this island." 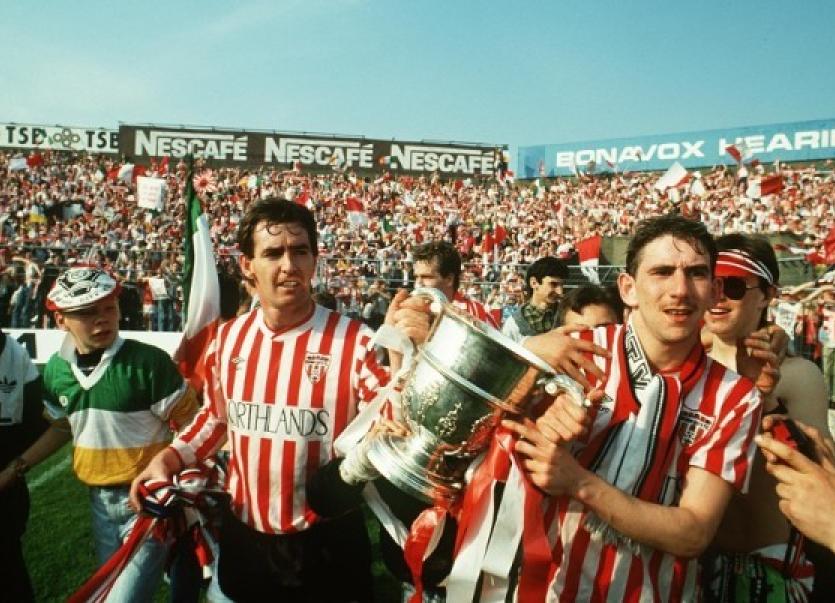 Derry City has enjoyed much success since joining the League of Ireland in 1985.

Derry City has indicated its support for a proposal which would transform football in Ireland.

An organisation called the All-Island League Advocacy Group wants to see a new cross-border football tournament involving teams from the Irish League in Northern Ireland and the League of Ireland in the Republic.

The two leagues would remain in existence but the new proposal would be that the top teams in each league would qualify for a knockout tournament which would see the winner crowned the all-Ireland champions.

Having studied the new proposals, Derry City today released a statement in which the club said they were impressed by the 'weight of the financial benefits' that would result from the new set-up.

"This is a seminal moment in the well being and even existence of professional football on this island," said a Derry City spokesperson.

"Presently, we have two football leagues, both precarious in structure and financial viability.

"The consequence of the coronavirus has added to the difficulties of maintaining a football club.

"Continuing financial outgoings with no sustaining incomes makes it very difficult for most clubs to keep their heads above the financial waters. More than likely it will make it disastrous for some.

"Concentration is momentarily on questions of when and how to get leagues up and running again; on who will be declared champions and who will be relegated.

"There are pressing questions about European competitions. If and how they will take place and, contingent on those decisions, will the clubs, four in the south and three in the north, receive their payment for qualifying for the competition.

"The more successful clubs who most often qualify for European competitions depend, to a great degree, on UEFA money to keep them solvent.

"The above is a reality known to every professional football club on this island, north and south."

The Derry City spokesperson said 'professional football is a sport, but it is also a business'.

"The pandemic has exposed the underlying fragility of the present model. In pure business terms it is not viable.

"There is not enough income being generated to sustain the business.

"Great efforts are made to keep clubs in existence, but those efforts can only be limited as they lack the finances to grow the business.

"A few clubs are blessed by generous benefactors who enable them to achieve some stability and success but are hindered by the lack of buoyancy and competitiveness of the other clubs.

"The historical relationships between the two leagues and their governing bodies, the IFA in Northern Ireland and the FAI in the south, have not been as constructive and creative as most clubs might have wished.

"We understand the natural tensions that often exist between governing bodies and clubs but it is time to acknowledge the tenuous state of both Leagues and to recognise that neither the FAI or the IFA have had the local leagues at the top of their ambitions.

"Pitted against the reality that it takes over £1,000,000 a year to maintain a medium successful club and the financial difficulties become apparent.

"We are informed that the IFA and the FAI have agreed to jointly examine the report. We see this as creative and important.

"That examination will be more authoritative if those two organisations are aware of the extent of the support that exists within the island among the clubs for an expression of professional football that is vibrant and capable of achieving the same support and success of comparable leagues.

"Derry City, whose history provides it with a unique relationship with both leagues and all the clubs on this island, wishes to affirm and support the sense and the urgency of the findings contained in the report.

"We would encourage other clubs to acknowledge the fragility of the present arrangements and to join in supporting the possibilities that an All- Island League would release."