'We have to start taking this seriously' 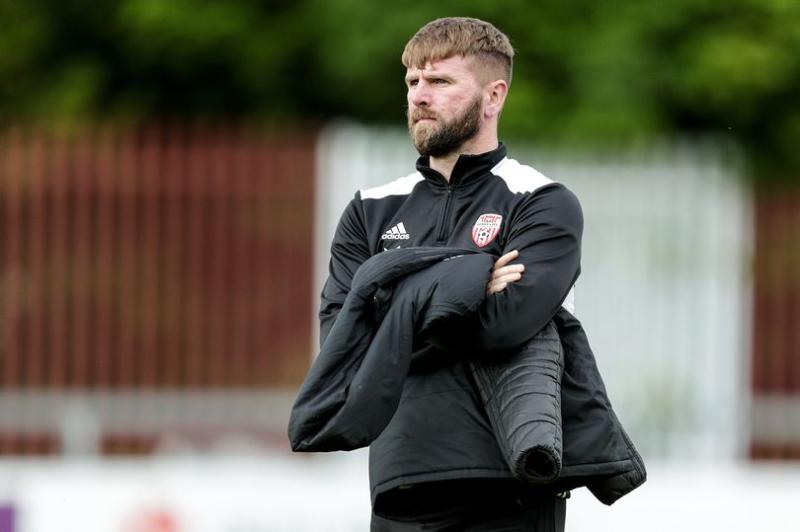 Derry City's Paddy McCourt has been in self-isolation for 12 days.

Paddy McCourt has urged the people of Derry to save lives by taking medical advice seriously and self-isolating as the shadow of Covid-19 continues to grow.
McCourt, his wife Laura and their three children have been self-isolating for 12 days now, only leaving home when absolutely necessary, but he has been somewhat distressed by images from around the country and beyond of people still socialising and not taking social-distancing advice seriously.
McCourt and his family made the decision to self isolate almost two weeks ago, after seeing how the spread of the coronavirus has affected other countries throughout the world, and he encouraged the people of his hometown city to heed the professional advice.
“If you look at the consistency of all the reports, you can see that you can help everybody by doing the simple things like washing your hands, only going out if you have to go out, not socialising and not going for needless visits,” he said.
“If you're helping an older relative or helping someone like a neighbour who can't get out for groceries, then that's fine, but don't just be calling to your mate's house to play the Playstation or have a beer.
“I think people really need to start listening to the advice we're being given because it's coming to a critical time. Whether it's ignorance or not taking it seriously, over the next couple of weeks there will be no option but to take it seriously because I think it's going to start getting serious here.”

Lethal
The virus can be lethal to older people and those with underlying health conditions and McCourt urged the young people of the city to think about who they could come in contact with.
“For young people who are fit and healthy it's probably not going to affect them individually but it's who they can pass it onto is the worrying thing,” he continued.
“Our club doctor (at Derry City) told us that we probably could train and even if one of our lads contracted it, it probably wouldn't do much harm, but it's about who he would then take it on and spread it to. That would be the worry so as a football club we decided not to.
“I suppose we're very lucky to have equipment to monitor the players from home. Seamus McCallion has managed to get all the players a GPS unit where they can still work out at home and they can download it and email it to him and then he reports back to us as a staff. In that respect there's a bit of trust there from staff to players, but on a wider issue, it is really important for people to listen to the advice they are being given on a daily basis. The majority of people are taking it seriously but there is an element, in my opinion, who aren't taking it as seriously as they should be.”

Encouragement
McCourt has been involved in football for most of his life and whilst temptation to get outside may be there whilst the sun is shining, McCourt encouraged the young sports people of the city to act responsibly to look after their physical and mental health as well as others.
“At the minute we're still not in complete lock-down, we can still go out, you can still get a ball and knock it up against the wall and do keep-ups. You can go for walks; that's the one thing I've been doing every day,” he explained.
“We go for a good long walk, all of us together, and when we're out we pick up what we need and we're back home. We're probably only out 45 minutes of the day but that's what we need to do for the foreseeable future.
“Hopefully some day we'll look back on it and say these were crazy times and we got through them unscathed. It is a period of two or three months and if you keep the brain active and keep feeling safe, that's more important at the minute than sport.”
McCourt caused something of a reaction on Twitter over the weekend when he stated that he would be getting back into football when this scare ended. The Derry Pele has clarified his statement.
“I think people picked that up wrong, in terms of trying to come back and playing, certainly not,” he laughed.
“What I meant by that is that I'm going to get back onto it, playing 5-a-side or 7-a-side once this all blows over. In the last 18 months since I retired, I went straight into that job at Derry, which was very, very time-consuming and still is.
“When this does blow over I'm definitely going to get back into some kind of playing, whether it's just a mess about or playing amateur, because I do miss it now.
“Over the last two weeks, we've all had loads and loads of time to think and I probably haven't had that time to reflect since retiring because I was out of one job and into the next and it was full steam ahead with that. It will just be for fun and to keep active more than anything.”