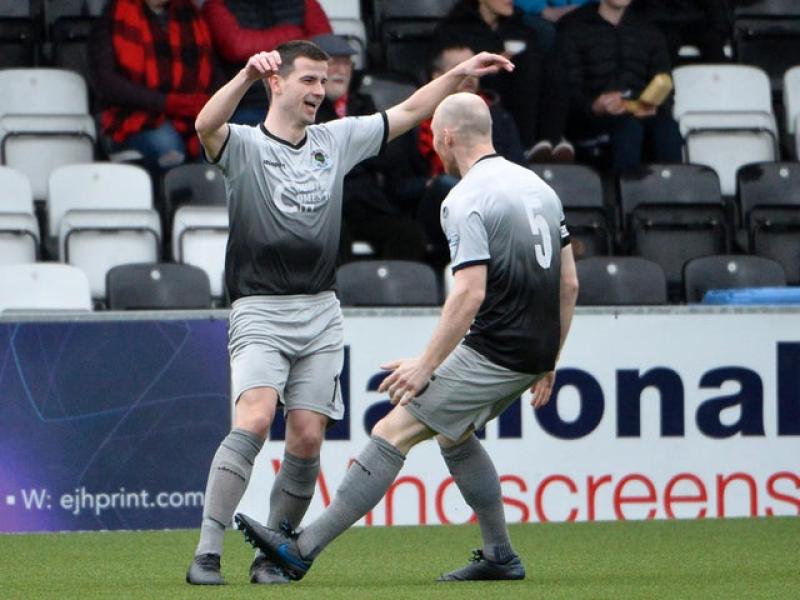 Sean Connor believes that if his team continue to play like they did at Crusaders on Saturday, they will have every chance of saving themselves from relegation.
'Stute fell to defeat at Seaview at the weekend, but they did so pushing the hosts all the way, even leading thanks to an early goal from Conor Tourish.
Ultimately, it wasn't to be for 'Stute, as Crusaders hit back to win, but Connor was encouraged with the performance of his team.
"If we perform like that between now and the end of the season, we'll pick up more points,” he said. “I thought our intensity was good, our shape was really good in the first half and that's the sign of how well we played.
"We are all in there gutted that we haven't picked up at least a point. This is the second time we have come here this season and really put it up to them.
"Of course you don't want to lose the game but if you are beat, you want to take some positives out of the games and we have plenty of positives to take out of that game."
'Stute needed just 70 seconds to take a surprise lead when Conor Tourish got on the end of a free-kick to send a looping header over Sean O'Neill into the corner of the net.
The Crues responded well with Paul Heatley seeing a curling effort from a David Cushley free-kick saved by Rory Brown but, soon after, Liam Walsh threatened for the visitors with a low shot which Sean O'Neill pushed out before Rodney Brown made the ball safe.
The sides continued to trade chances as the first half progressed. Evan Tweed was on hand to nod Michael Ruddy's goalbound header clear while Walsh was twice more denied by O'Neill.
The introduction of Jordan Owens at half time had a significant effect on the game as the striker proved a handful for the Institute defence.
However, Crusaders got back on level terms with three minutes of the restart thanks to Philip Lowry's lashed finish from 15 yards after Jordan Owens had glanced a header into his path.
Lowry might have doubled his tally soon after with a snapshot just past the post which had Brown beaten while, a few minutes later, the 'Stute keeper was forced to turn a fierce Rory Hale drive over the bar before blocking a Ruddy point blank header.
Just before the hour, Heatley edged the Crues into the lead with what proved to be the winner with a competent finish after Tourish could only partially clear a long ball forward.
Meanwhile, Crusaders assistant manager Jeff Spiers admitted that the introduction of Jordan Owens changed the game in the home team's favour.
"It was hard-fought,” he admitted. “They scored in the first minute and it took us 45 minutes to get going. The players were big enough to say we weren't in the game, they weren't doing things right, things weren't working.
"We brought Jordan Owens on and he changed the game for us. Jordan came on and won a lot of headers and we got up the pitch another 10 or 15 yards and that made it easier.