Connor moves on from Blues controversy 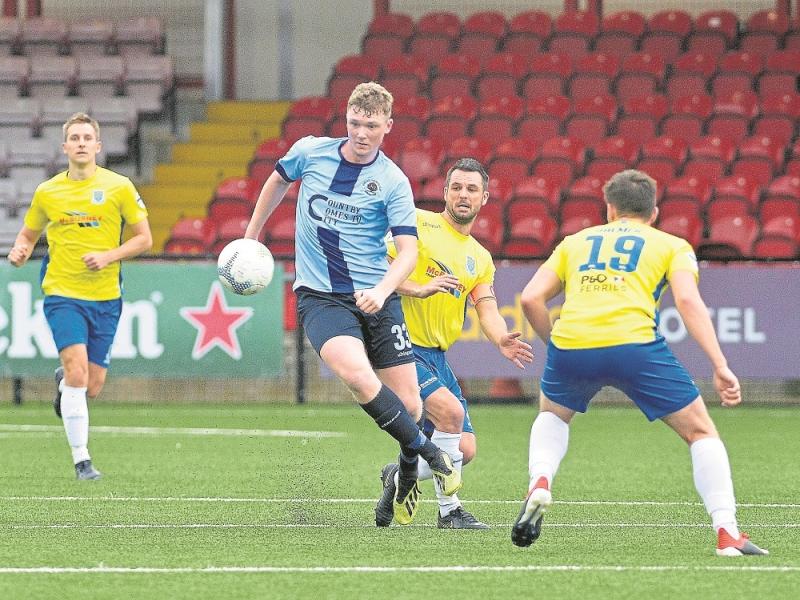 Institute drew 1-1 with Ballymena United when the teams met at the Brandywell earlier this season.

Opinions continue to be split on the controversy at the Brandywell last week, but Institute manager Sean Connor is refusing to linger, switching his attentions to an important game at the Ballymena Showgrounds on Saturday.
The ‘Stute boss was furious with referee Raymond Crangle after he dismissed Ryan Morrow for an off the ball incident and awarded Linfield three penalties in the 3-0 defeat at the Ryan McBride Brandywell Stadium last week. That brought about ‘Stute’s first defeat in five games in all competitions, and while his players continue to criticise the official’s handling of the game, Connor is determined to move on, bringing just the one positive from the game with him.
“I’ve seen the highlights and I’ve seen the replays and it is what it is and that’s gone and thing that I can say will change the result so as a club we are just moving on to the next game. For me, I’ve taken the group eight weeks ago and for us to come in and feel really disappointed that we didn’t get a result against Linfield was fantastic.
“The whole thing, from the performance on the day, everything was brilliant and the team were together and that’s the positive that we have got to take out of it and anyone who was at the game knows that we played really, really well.”

Shock
Last weekend saw arguably the shock of the season so far as league leaders and previously unbeaten Coleraine fell to a shock defeat to bottom of the table Warrenpoint. That result not only cost Coleraine top spot, but also closed the gap significantly at the foot of the table with Warrenpoint now just two points behind ‘Stute who have played a game less. The victory increase pressure somewhat on Connor and his players but the ‘Stute boss is only focused on one thing.
“Do you know what I’ve learned? I don’t worry about things that are out of my control,” he explained. “I can’t control how Warrenpoint perform or play of prepare. All I can do is prepare my team and focus on what we can do, week in and week out and that’s all I’m concerned about.
“That shows however that anybody can beat anybody and it also shows that if you don’t show up and don’t perform than you’re in trouble. That’s what I’ve said to the players, that if we can keep turning up and performing to that standard then we’ll be okay.”
Last weekend’s defeat to Linfield brought an end to a testing run of games for ‘Stute who, Coleraine side on November 30, now face a run of games against teams in the bottom half of the table. These are the games in which Connor is hoping his players can really start to pick up the points.
“We haven’t played anybody outside the top six apart from the Warrenpoint game which was only the second game since I came here so it has been a really tough run of fixtures,” he agreed. “The results we have picked up are only good results if we go and beat the teams around us and that’s what we have to focus on.”
‘Stute are without Ryan Morrow, who is suspended after last week’s red card whilst Caoimhin Bonner and Cormac Burke remain sidelined through injury.