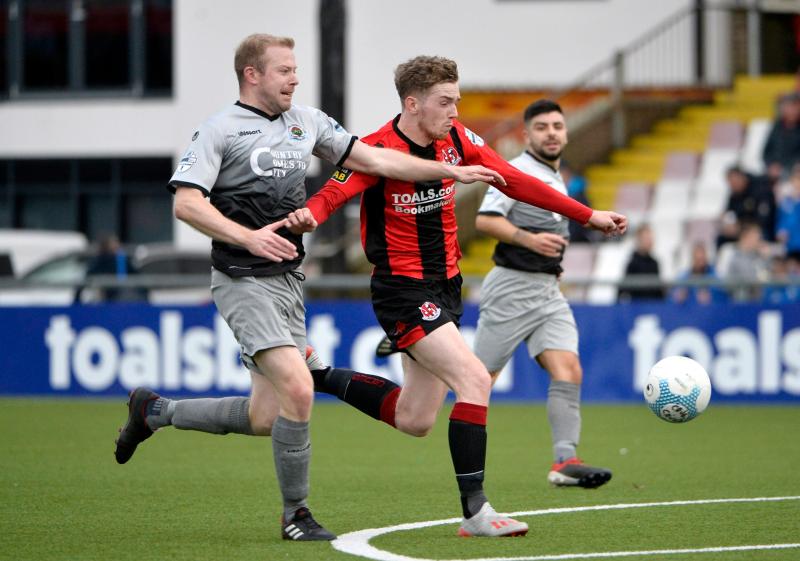 Action from the 1-1 draw between Crusaders and Institute last Saturday. Glentoran are the visitors this weekend. ©INPHO/Stephen Hamilton

Institute boss Sean Connor is hoping that his side can bag all three points against Glentoran this weekend - and he has good reason to have some optimism.
Despite lying second bottom, ‘Stute have gradually been turning the corner and last weekend picked up a useful point away to Crusaders.
“I have been encouraged by our last number of performances and I think that since taking over the players have worked really hard and bought into the belief system that we have created,” he said.
He continued: “What we want now is to turn some of the draws into victories.”
On the playing front, Connor must plan with Caoimhin Bonner who is out long term with an ankle injury, while Cormac Burke is absent with a hamstring injury. Stephen Curry won’t make it either as he also has an ankle injury.
Aware of Glentoran’s strengths, Connor said: “It’s going to be another difficult game. I think they are a very good footballing team and have some fantastic footballers. I like the way they play and go about their game.”
One key player could well be Gavin Peers, the veteran defender who once had a spell with Derry City and who Connor brought into the League of Ireland some years ago.
“Glentoran are a big club and have gone full-time and I think that has been a benefit to them. It’s a massive task for us, but we will go into it with a bit of confidence.”