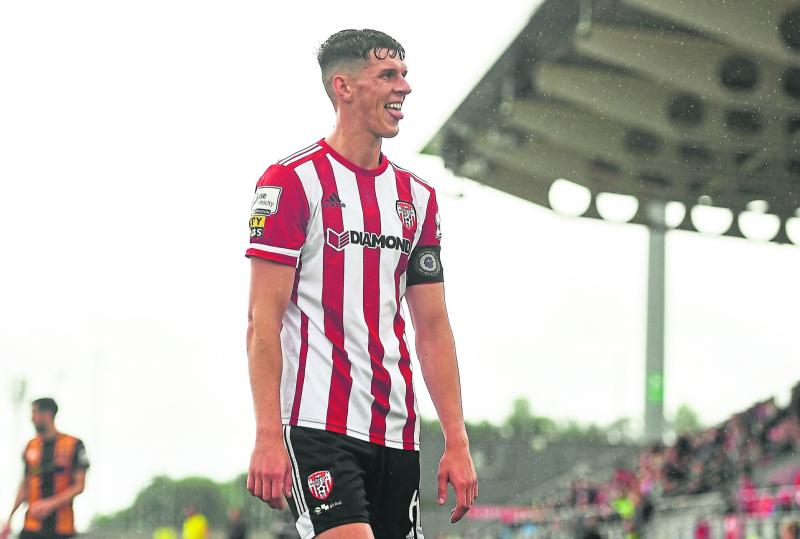 Eoin Toal insists that he and his team mates will give everything between now and the end of the season as Derry City close in on third place and European football.

The City captain played a massive role in the 1-0 win over St. Patrick’s Athletic at the Brandywell on Friday night, a victory which takes the Candystripes to within one point of third-placed Sligo Rovers.

Junior Ogedi-Uzokwe scored the only goal of the game to give City a significant victory at an important stage of the season.

“St. Pat’s are a great side and they are not second in the table for no reason,” Toal said afterwards.

“We knew it was going to be a tough game. In the first half we weren’t our best and they probably had a few chances in the first half to go one or two up; the main thing for us was to just dig in until half time and come in with a level head.

“We knew we would get a few chances and we knew we would have to take them. Jack Malone came on and was brilliant, he gave the ball to Jamie who put in a brilliant cross for Junior to finish and that’s what he’s good at. We dug in really well after that and that’s a sign of a really structured team. We held out at the end there which was really good.”

City have come a long way in a short time under Ruaidhri Higgins, with European football now a real possibility. The team spirit is better than ever for a team that began the season with four successive defeats.

“Ruaidhri has been brilliant since he came in,” Toal reiterated. “There’s a really good team spirit at the moment. We know how good a manager is and he definitely wants to bring good football to the Brandywell.

“ It will be interesting but we have a big task ourselves and, hopefully, we can push on and try and get into that third spot. That’s our aim, and it’s going to be hard but we’re going to have to dig in and, hopefully, try to get it.

“Everyone has to play each other so it’s going to be really tough but hopefully we can take each game as it comes and get the points we need.”

The question of Europe is now unavoidable for Higgins, whose team have suffered just one defeat in the last nine league games. With home games against Bohemians and Sligo Rovers still to come, there is no doubt that Derry’s destiny is in their own hands.

“There's no point in playing the question down now with six games to go," he admitted. "This was significant. I think and it puts us right in the hunt for that place. The players deserve huge credit for getting themselves in this position.

"It's set up for us and we'll give it a real crack and see where it takes us. If we don't get into Europe it won't be for the want of trying because the players are giving absolutely everything. The staff are giving everything and have been brilliant to work with and there's a real good feel factor around the place at the minute and long may that continue."

Friday also saw the biggest attendance at the Brandywell this season, with close to 2,000 fans cheering the team on to victory.

Those rising numbers could well prove pivotal to City in the remaining games. “The crowd were absolutely brilliant tonight especially when Pats were dominating and had large periods in the game,” Higgins agreed. “They got right behind us and the difference when there's supporters in is mind blowing compared to when they're not here.