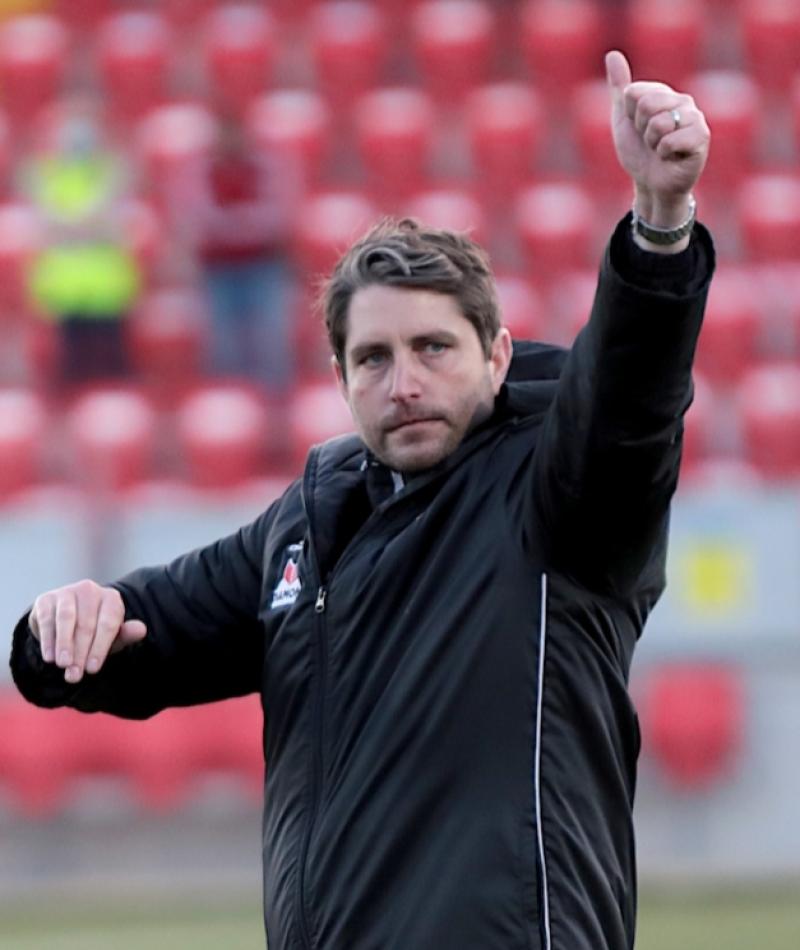 Derry City boss, Ruaidhri Higgins, has praised the Brandywell faithful saying the fans have been their 12th man as the race for Europe nears its end.

The Candystripes bagged a vital 1-0 win in front of a very vocal crowd at home to St Patrick's Athletic – a win that moves them to fourth-spot in the Premier Division.

A point separates them from Sligo Rovers in third – the position needed to secure European football next season.

Higgins says it's no coincidence that Derry's surge of form has coincided with the fans being allowed back in following the relaxation of Covid restrictions and with 18 points still left to play for, he's hoping the fans can keep on roaring the team on to hopefully a place in Europe.

He said: ““Our home form has been excellent over the last month or two and it's coincided and gone hand-in-hand with our supporters being let back into Brandywell.

“That kind of explains itself as to how big an affect the fans coming back in has had on the team.

“When your own supporters are roaring us on and geeing us up, it's huge. When there wasn't supporters in the ground, you might not have the same energy as you might have when they're here.

“Hopefully we can continue that relationship. We've six games to go so our supporters will be crucial for the run-in.”

The supporters were in full voice last week during the win against second-placed St Patrick's and although Derry were having to rely on the counter-attack for long spells of the game, Higgins says the way in which victory was achieved shows the sign of a good team.

He added: “It was a good night for us with a very good atmosphere in the ground with the players feeding off that.

“It was a game where we were up against it for large periods. However, we showed a different side to us and it's a sign of a good team when you're not playing to your full potential but you can still grind out a 1-0 win.

“It was a fantastic goal as well that got the job done. Nathan (Gartside) did really well in goal but people are getting away from the fact that while St Pats had good chances in the first half, so did we as well.

“Although they dominated large periods of possession, we had three good chances on the counter-attack. It didn't surprise me that our goal came from a counter-attacking position as well.

“But people are right to highlight Nathan as he made some good saves at key moments in the game and kept us in it.

“Although we as a team were not fantastic and didn't dominate, we still created chances in the game.”

Higgins is reluctant to comment on the prospect of qualifying for Europe but admits to being pleasantly surprised that his squad has climbed so high in the table.

He continued: “I'm not surprised because I knew how good a squad we had here. I'm probably pleasantly surprised at the points total we've accumulated.

“The players have gone from strength to strength and they've been brilliant. They've also been a joy to work with – as have the staff – so it's been great.

“We've got ourselves into a position that we have something to play for. Initially, the plan was to stabilise and stay in the league but we've gathered good momentum to be where we are now.

“There's eighteen points to play for and so much can happen. We have to treat every game on its merits, with respect and not get too far ahead of ourselves.

“The key to our form is that we haven't looked past the next game so we won't start doing that now.”