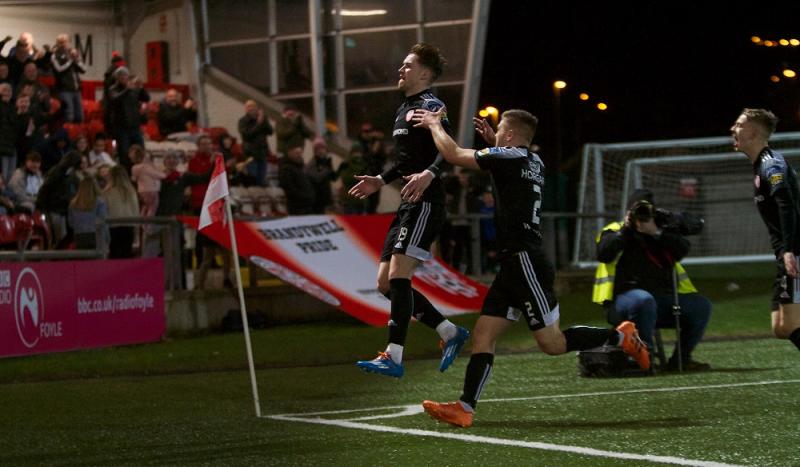 Stephen Mallon has revealed that he hopes to prove his maturity as a player at Derry City, having previously ‘thrown the head’ when not picked to start games.
The Belfast youngster announced his arrival at the club in style on Friday night, scoring a superb individual goal in the 2-0 win over Bohemians, his first start for the club since joining from Sheffield United on loan.
Mallon has had to be patient, appearing as a substitute in games against Dundalk and Finn Harps, and he took his chance when picked for the starting eleven for the first time. His performance will give manager Declan Devine something to think about ahead of this week’s game against Waterford, and Mallon admitted that the opportunity to prove himself on the pitch drives him every day.
“In the first game I didn’t start but I kept my head,” he explained.
“I’ve had times before, playing U23s, when I haven’t been picked and I’ve thrown my head, but tonight was a chance to prove that I’ve changed and I’ve matured and that I am going to work hard every day. Decky put his faith in me and the goal was an unbelievable feeling.”
Mallon was a threat for Derry City throughout Friday’s game and was involved in a fascinating battle with Bohs defender Michael Barker, a battle he eventually won.
“I play to my strengths, I get the ball and knock it down the line and use my pace and get crosses in,” he explained.
“I think he started to read that and that’s why, on the goal, I came inside to go back out.
“It was an unbelievable feeling running over to the fans in the corner. My body was numb, it was an unreal feeling and to have my family in that corner as well was unbelievable.”
The importance of getting the first win of the season was not lost on anyone at the club, but Mallon insists that neither he nor his team mates are getting carried away.
“We’ve had two hard games,” he acknowledged. “We went to Dundalk and put in a good performance and were unlucky and Finn Harps I think we could have come away from that game with two more points, but it’s moments like this when you have to dig deep and keep on going.
We always thought we could win this game, but it is only one game. We have four points on the board and we go into next week with the same attitude because we want to get another three points and get to the top end of the table.
“The next game is a big game so hopefully we can go down there, give 100% and come away with the three points.

‘No pats on the back’
Meanwhile, Declan Devine has got one of his pre-season wishes as his team beat one of the top three at last, but he is not celebrating too much.
“I want to beat them again,” he stated. “There’s no pats on the back. We’ve done it once, we have to play them another three times, we have to play Dundalk another three times and we have to play Shamrock Rovers four times. “It’s a good start doing that but for me this was all about character.
“The boys took a few digs last week, with a few people saying things that I felt hard done by, but that’s the nature of it. We have to remember that when we came into this club they were 8th in the league having lost 20 league games, the crowds were down to 800-900 people.
“People quickly forget, but we have to understand that this is the nature of the job.
“The support we received was honestly unreal; the singing and the backing the players received, that’s everything, that was important as the performance on the pitch.”