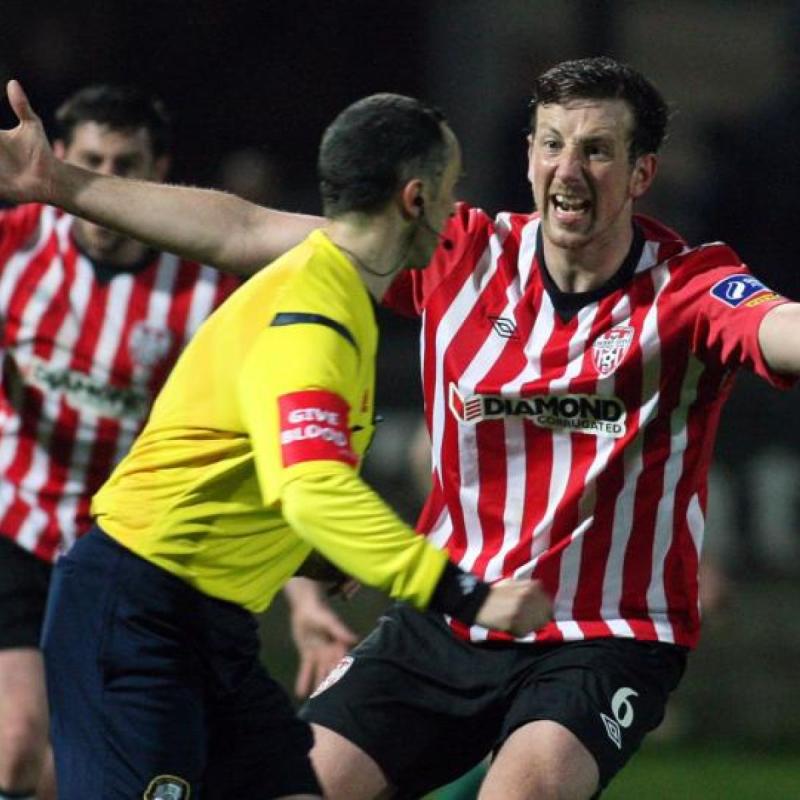 BACK IN THE DAY... Shane McEleney's spell at Derry City was successful, as he won the First Division title, the League Cup and the FAI Cup with his home town team.

Shane McEleney says any soft spot he has for Derry City will be forgotten about for 90 minutes this weekend as he returns to face his old club wearing the blue of Finn Harps.
The 29-year old has come back to League of Ireland football after four years away and returns to the club he grew up with just two weeks into the new season. For McEleney though, it is just another game.
“I think I'm at that point in my life and career where, I wouldn't say I don't get nervous, and butterflies are good, but I'm kind of used to it now at this stage,” he explained.
“You just go out and do the best you can. Obviously it's against Derry and I played with them for five years so I still have a soft spot in my heart for them, but I won't have a soft spot on Friday night because there won't be one for me. I'll be looking forward to it and relishing it.”
Harps go into the game on the back of a 1-0 win against Sligo Rovers in their opening game, and despite the pitch being labelled as 'crap' by Liam Buckley afterwards, and despite the torrential conditions, McEleney believes the three points went to the right team.
“It was one of those wins where you get three points up on the board quickly and you get confidence from it,” he stated.
“The boys are delighted. We all gave a good account of ourselves. It was a bad night and the pitch wasn't great but we stuck at it and I think overall in the 90 minutes we created the better chances in the game. It was a pleasing performance and we're off to a good start so we're happy enough.”
For too long Harps have been in a battle to retain their Premier Division status, and again last season, just did enough to beat the drop by beating Drogheda in the end of season play-off.
A number of new signings have given rise to the hope that Harps will do much better this time around, a feeling which was reinforced by last week's win. McEleney believes it is too early to make judgements.
“The thing is we know what it's going to take,” he explained.
“Every game is going to be a tough game. I think it's a tougher league than it was last year. We've had a decent pre-season. I know results in pre-season don't really mean much but we got a good amount of fitness from it and I think that showed the other night because I think we looked fitter than them over the whole 90 minutes. Hopefully we can stay a couple of pegs above it, but it's going to be tough.
“By no means are we saying 'We're definitely staying up and this, that and the other'. I'd be lying if I said that, but we are just looking forward to it and we'll take every game as a cup final which I think will suit us because we have got a good group and a good mentality.”

Unusual
It is not often that Harps find themselves higher than their Northwest rivals, but that is one of many fascinating subplots which make this another highly-anticipated derby encounter.
“We may as well take it when it comes,” McEleney said. “The boys are looking forward to it on Friday.
“We know coming up to the Brandywell that Derry have a good record at home. They did well at home last year so we know it's going to be a tough game for us, but it's just another game of football and that's the way you have to look at it.
“ I know it's a derby but after 90 minutes it's all over and done with.
“Every game, especially the first games, are always cagey. It's always kind of helter-skelter because teams don't really hit a rhythm until five or six games in. Derry have a relatively new squad as well with a lot of new players, so the more points you can put on the board, regardless of performance, the better it stands to you.”