It is conceivably a case of 'do or die' for Institute this evening in a game that could define not only the remainder of their season, but their status as a Premier League team 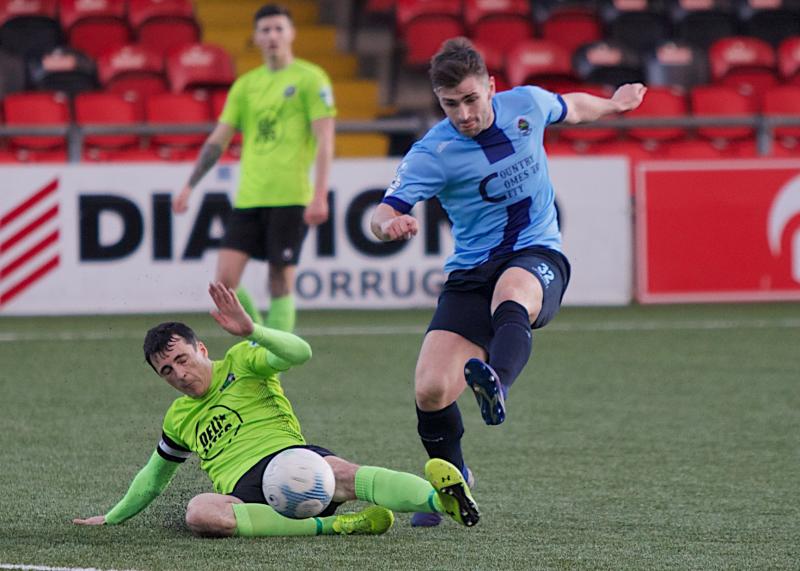 Institute have failed to pick up after losing 1-0 at home to Warrenpoint in December. They now need to win tomorrow night to give themselves any hope of avoiding relegation this season.

It is conceivably a case of 'do or die' for Institute as they prepare to face Warenpoint this evening (7.45pm ko) in a game that could define not only the remainder of their season, but their status as a Premier League team.
Bottom of the league, without a league win since November, 'Stute are in dire straits, with goals, points, confidence and form at their lowest levels this season.
With experienced players leaving and new players still settling in, it is a difficult time for all concerned at the club, especially with such a huge game on the horizon.
Two points separate 'Stute and tomorrow night's opponents Warrenpoint, making this game the proverbial 'six-pointer' for both ckubs who understand the importance of a victory this weekend.
Institute manager Sean Connor says he and his staff have been working to “create a high-performance culture,” at the club and have been working since his arrival to “change the players thinking and how they approach and prepare games', as the club head into a must-win game against Warrenpoint at Milltown.
Institute go up against relegation rivals Warrenpoint who sit only two points above Connor’s side within the bottom two of the Danske Premiership. It comes off the back of a 0-4 defeat against Larne at the Brandywell towards the end of January and the taking of only 1 point from a possible 12 in Institute’s last 4 games.
Connor has been preparing his team all year to change the psychology of the players, and he insisted that something as important as mentality does not just come during relaegtion battles like this.
“You prepare the lads psychologically all year. You don’t do that in isolation, it's a process that starts when you come in and it's a process that is ongoing and continually developing,” Connor said.

Restrictions
Having joined Institute in September of last year, Connor said the financial restrictions at the club has impacted its position in the league.
“Ultimately your budget impacts upon where you are in the league and what you can do, we know we’ve got a very strict budget and we’ve just got to maximise that the best we can.”

Connor went on to highlight the club's inability to find stability throughout the course of the season, “From the start of the season we’ve never been out of the bottom two, it's not a secret that’s that’s where we’ve been and that’s what we’re in.”
Looking at his squad for this weekends match, Connor said that 27 year old right-back Caoimhin Bonner continues to be sidelined.
“Aidan McCauley is a doubt with a hamstring strain. It is not a pull, it's more of a strain and Graham Crown is recovering from flu so they’re the only main injury worries we have a the minute,” Connor revealed.
Institute will be looking at this weekend's match against fellow relegation battling Warrenpoint as a 6-pointer as ‘stute go up against league chasing Coleraine the following weekend. The league's bottom six will be relatively set, ahead of the scheduled split on 21 March, seventh-placed Glenavon and Carrick Rangers, in eighth, placed well clear of the relegation zone.
Earlier this season, Institute won 3-1 at Milltown in their first Premiership encounter with Warrenpoint, then Barry Gray's men exacted revenge in a 1-0 away success on Boxing Day.
After losing his opening game in charge 1-0 to Cliftonville, Connor enjoyed a positive bounce as Institute manager, with defeat in just three of their next 10 league matches. Connor watched his side lose 0-4 to Larne last weekend but hasn't given up hope just yet: “We showed a lot of fight in losing to Larne but confidence is a bit low,” he admitted.
With games coming up against title-chasing Coleraine, Crusaders and Cliftonville in the weeks after the Warrenpoint game, there is no doubting the importance of a positive result for Connor and his players tomorrow night.