Sean Connor and his players will be pushed to their limits in the next few weeks, starting with a trip to Seaview to face Crusaders this weekend. 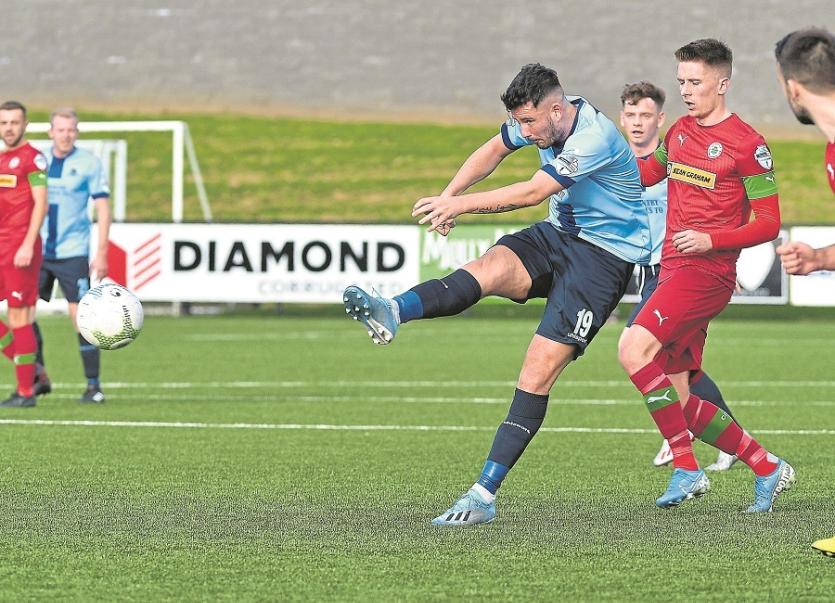 Joe McCready was on target for Institute yet again during the week.

The improvement is noticeable at Institute, but Sean Connor and his players will be pushed to their limits in the next few weeks, starting with a trip to Seaview to face Crusaders this weekend.
The fixture list looks somewhat unforgiving for ‘Stute who are slowly but surely making strides under Connor since his arrival as manager.
A 1-0 win away at Newry City on Tuesday night in the League Cup, courtesy of yet another goal from Joe McCready, has put the club within 90 minutes of reaching its first senior final. McCready struck the only goal after just nine minutes of the contest and that goal proved enough for his team to go through to the last four.
“It was a perfect start,” Connor agreed afterwards.
“We came here and we said that we needed to get a goal early on. We knew that the longer it kept at 0-0 they would grow in confidence because they were at home and they would really try and push us but I think that after we got the goal we controlled most of the first half.”
There are some huge names in the hat for the semi-final stages however with a Ben Doherty hat trick helping Coleraine overcome Dundela, while Linfield and Crusaders also overcame Cliftonville and Ballymena United respectively. ‘Stute will be underdogs regardless of opponent but Connor insists that his team can upset the odds and make it to a cup final.
“Of course we can, that’s what football is all about,” he stated. “We said ‘let’s get ourselves into a semi-final and when you’re in a semi-final it’s anybody’s game. It’s about who turns up on the night, or a bounce of the ball or a bit of luck so we’ve as good a chance as anybody now.”

Right direction
The victory was yet another step in the right direction for ‘Stute who held Larne to a draw at Inver Park last weekend, but with league games coming up against Crusaders, Glentoran and Linfield in the next three weeks, ‘Stute’s new found character is set to be sorely tested.
“I actually think since Cliftonville, we’ve had it tough,” Connor stated. “We had Cliftonville, then we were away to Larne. November is going to be a tricky month because even after these fixtures we have Coleraine and then Ballymena so we have nothing easy.
“That’s why it’s good being in the top flight because you’re playing good teams and motivating your players shouldn’t be an issue. You’re also challenging yourself as a coach against the best teams and the best coaches so it’s really good.”
One area of concern in particular for ‘Stute is a lack of goals with only 9 scored in 12 league games so far. McCready has carried the burden of expectation for his team so far, with seven in all competitions.
“I’ve no problem with Joe scoring every week but if other players want to chip in that would be nice,” Connor added. “The way we’re playing at the moment Joe is always going to be our highest scorer. One of the things I’ve tried to work at since I’ve come here is to get Joe in the box because I think when he gets the ball in the box, I don’t care who we’re playing, I think he’s dangerous.”
‘Stute are no strangers to being the underdogs and they will be so again against a Crusaders team who have been free-scoring this season.
“Over the last four or five years they have been one of the top teams in the league and Stephen Baxter has continuously evolved and developed their squad and they keep their standards really high,” Connor remarked.
“It will be very interesting to see how we measure up against them. Can we sustain the pressure we’ll be under at times but also do we have enough about us to go and create some problems for them?”