Glenn swings and STEPS in aid of mental health 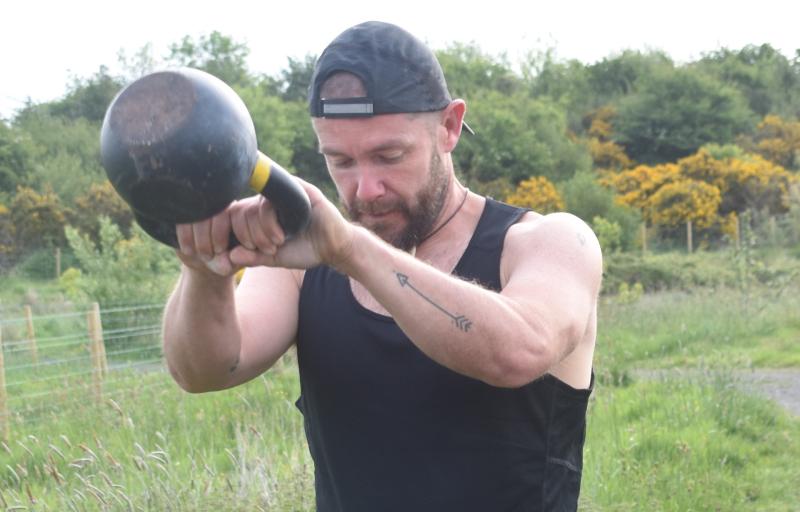 Seven years ago, Glenn White and his family swapped the beauty of Dartmoor in Devon for Drumnaph Nature Reserve.

Tucked off the Halfgain road, it is one of Slaughtneil's greatest gems.

Glenn, who coaches fitness in the wild outdoors with his company Wild Life, was due to celebrate his 43rd birthday by competing in a half triathlon, before it was cancelled due to the sporting lockdown.

“I always try to do something challenging on or around my birthday. I guess it makes me feel alive as my inevitable demise looms ever closer,” Glenn said.

It was time to put his creative mind to work and invent a new challenge, something on his doorstep.

“I love kettlebells and live in the middle of a nature reserve with loads of footpaths so it meant I could do the challenge without having to travel,” he points out.

He has a background in combat sports, primarily Filipino Stick Fighting, is a big lover of tree climbing, cold water wild swimming.

“A fellow stick fighter and kettlebell instructor, Dave Hedges, from Dublin completed a mile of swings a few years ago and sowed the seed to do it here.”

As part of his challenge he aimed to raise money for local mental health charity, STEPS. After targetting £500 as a total, he smashed it and currently has £1,700 in his Justgiving account.

“As someone who has and still does suffer from, at times acute anxiety, raising money for mental health support is a no-brainer,” he explains.

“Suicide is the single biggest killer in men under the age of 45 and the daily number of deaths is going up for both men and women. In Northern Ireland the suicide rate is about double that of England, with almost 30 percent of our community suffering from mental health issues.”

“We are all affected by mental health issues, either directly or indirectly, and it's time for it to stop being a taboo subject.”

A back injury curtailed Glenn's early preparations and he switched rehab mode. His days comprised a series of flexibility routines.

“The human body is remarkable at healing and movement is medicine. After a couple of weeks I felt I was good to go, so started doing kettlebell swings daily, building up in volume and then moving onto to the walking swing whereby i take a step forward at the top of each swing.”

With over 2,000 swings during his 'iron mile', technique was everything. There was the small matter of managing his hands, such was the wear and tear from the kettlebell.

“The kettlebell is constantly moving inside your grip so any hard skin or calluses there tend to rip off,” Glenn outlines.

“So I had a weekly routine of filing, shaving and moisturising my hands. They are more rubbery that leathery.

“I used a 16kg kettlebell. This would be fairly light for my average workout but after 2,053 swings it felt anything but light. If I do it again i may go up to a 24kg.

The heat was the biggest issue. Within five minutes of his scheduled 8.15am start, he was dripping with sweat.

“I was wishing we started two hours earlier, sweat in the eyes and on the palms is less than ideal.”

With about 200 metres to go, Glenn could feel blisters popping on his fingers, but the finish line was in sight.

One year older, another challenge met and money raised for a worthwhile cause.

Donations can be made at: justgiving.com/fundraising/ironmile