Serious safety fears over footbridge across A6

Residents have expressed concern after temporary lighting on the bridge was removed. 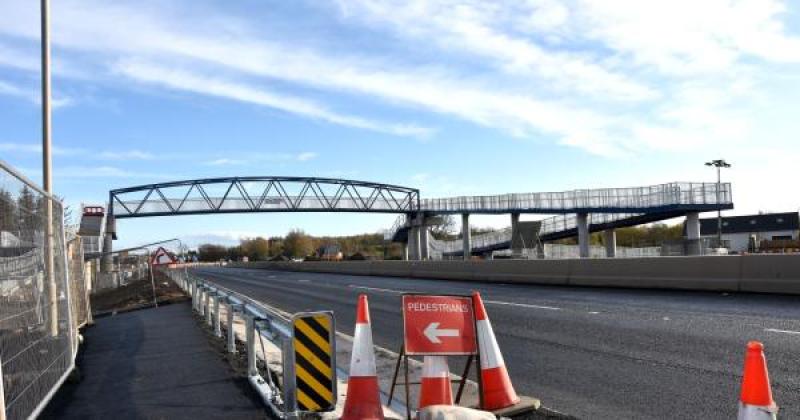 A County Derry community has raised serious safety concerns after temporary lighting on a footbridge across the A6 dual carriageway was removed last week.

The footbridge, servicing the Broagh Road, Castledawson, was erected after A6 dualling work effectively cut the road in half, making access to the southern side of the carriageway difficult.

Temporary lighting was installed on the bridge to allow residents to visit relatives on the far side of the road, and allow access to the local GAA club, St Malachy's GAC.

“Initially the footbridge was opened with no lighting, which meant it was unusable from 4pm in the winter months, as it was in complete darkness,” said local resident Shauna Doyle.

“After some community pressure and help from local media outlets, the Roads Service agreed to put temporary lighting on the bridge so it could be used for the purpose it was built.

“They informed the local community that these were a temporary measure until a more permanent solution could be found.

“After some community pressure and help from local media outlets, the Roads Service agreed to put temporary lighting on the bridge so it could be used for the purpose it was built.

“They informed the local community that these were a temporary measure until a more permanent solution could be found.”

However, the lighting that was put in place last winter has now been removed, leaving the Broagh Road residents in the dark over what the next steps will be.

Broagh Road residents now fear the issue could have an impact on both the mental and physical health of the community.

“Our local GAA club has recently opened a fully lit walk way which is available at all times for the local community to use,” said Shauna.

“It had been a lifeline during the initial lockdown to youngsters and elderly alike and provided a safe environment for people who found lockdown mentally and physically challenging.

“They were able to walk across the fully lit footbridge to a fully lit, safe walkway to get some much needed respite from a situation which has affected so many in so many different ways.

“Older local people were able to maybe speak to another person, in a safe outdoor environment, take their children for a healthy walk or ride on their bikes.

“At the minute any member of our community who want to use the bridge after 4pm to visit family members or to go to the walkway have been effectively been told they are no longer able to do this.

“We are concerned that this will have serious consequences in the weeks ahead where new tighter restrictions are being put into place.

“We are also concerned that members of the community will try to use the walk way, having no other choice, and be injured in relation to the dangerous way the bridge has been left.”

The group have contacted the Roads Service a number of times, but the situation is no closer to resolution.

Shauna has expressed concern that a perfect storm of poor lighting, busy traffic and inappropriate bus stop provision will lead to tragedy.

“Another Health and Safety concern is the position of the bus stop for Broagh Road South children once this new stretch of road opens. This has been a concern for 2 years, and the Road Service have still not provided any answers to how it will be safely rectified. Children will be required to walk to the Thatch to catch a bus.

“This will be on a main road - with no Footpath or lights. At this time of the year, it is dark when the kids leave home at 7.50 to catch a bus. It will then mean a longer walk along a dark road.

“In 2018, this was raised as an issue. We were told it would be looked at. To date there have been no completed risk assessments.

“15 children from Broagh Road South are being asked to make this journey along a fast stretch of road. Are the Road Service waiting for a serious accident to happen before they will act?”

The Derry Post contacted Roads Service but no response was available at the time of writing.