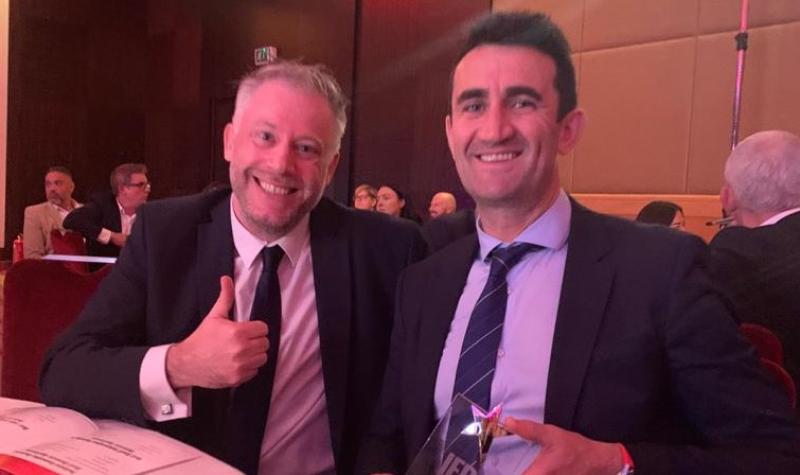 A County Derry electrical retailer has won a prestigious accolade at a leading awards ceremony held in London.

Donaghy Bros were thrilled to scoop the Best Large Independent Retailer award in the category of Consumer Electronics – usually referred to in layman's terms as brown goods - at the Innovative Electrical Retailing (IER) Awards.

The awards, which have been running for the last 29 years, recognise excellence in the electrical sector.

Donaghy Bros, which was established in 1964, has showrooms in Kilrea and Limavady and also operate online.

Seamus Darragh who has been with the company for almost 30 years and who heads up the consumer electronics division of the business commented “As stockists of all leading manufacturers including Sony, Samsung and LG we offer one of the best selection of Consumer Electronics in Northern Ireland so its great to have been chosen to win this award category.

“Whether the customer wants a smart 24" or a whopping 85" set we have a wide range of options to suit everyone including HD's, Smart TVs, LEDs,  OLEDs,  LCD, QLEDs or Neo QLEDs ”.

Seamus added that the knowledgeable staff at Donaghy Brothers are on hand – whether in store, over the phone or via email - to explain the key features of each item within their electronics division including accessories like soundbars and stands with the aim of helping the customer choose their ideal product.

Donaghy Brothers can also arrange an installation and repair service for electronics customers.

Donaghy Brothers were up against some very strong competition with entries for the awards coming in from Electrical retailers and Manufactures across the length and breadth of the United Kingdom.

James Donaghy, MD of Donaghy Bros, who attended the ceremony in person at The Park Plaza London Riverbank said: “It was fantastic to hear our name read out as a winner again this year amongst some great companies.

“We work very hard to be innovative and industry leading, so it’s a great achievement to gain recognition for this.

“And it's brilliant to celebrate the hard work and dedication of our team here at Donaghy Bros.”

James went on to add that it was great to see Industry events such as the IER Awards make a comeback in person after they hosted a virtual event in 2020 in light of the Covid Pandemic.

He said “Events such as these are a great networking opportunity for the leading figures in the Electrical retailing industry and a great morale boost for staff.

“We are looking forward to entering and hopefully attending more awards events in the coming months,” James concluded.

The move is part of a plan to compete with multi-nationals.