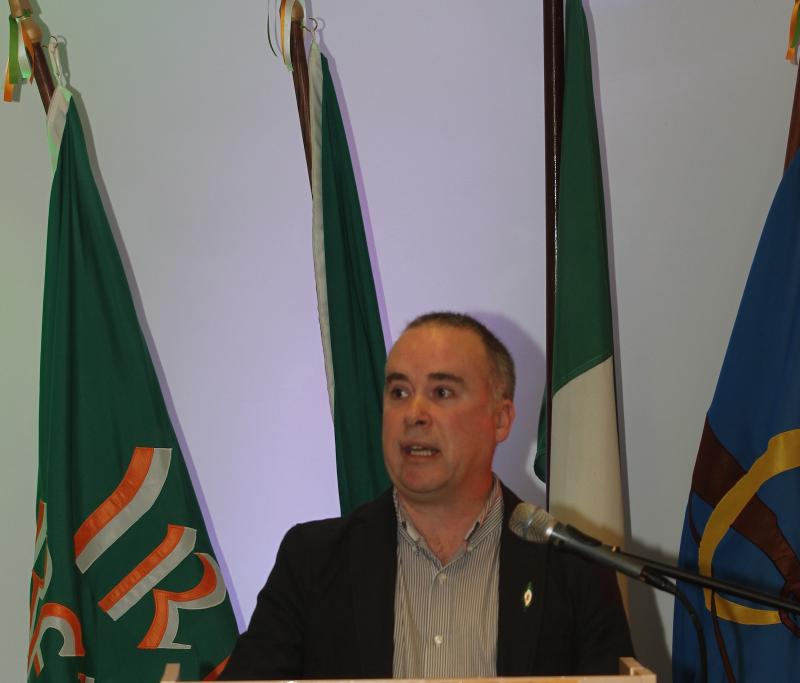 Sinn Féin has fielded one of its most senior activists in County Derry as an election candidate as part of the republican party’s plans to increase political strength on Mid Ulster Council. The inclusion of longstanding and well regarded party activist and campaigner, Paul Henry, who has strong family connections and a firm political base in Lavey, as one of the party’s four candidates in the Carntogher district electoral area, signals the future political intentions of the republican party.

Mr Henry (pictured), who is in his late 40s and currently lives in Maghera,  joins councillors Seán McPeake and Brian McGuigan as well as first-time local government candidate Córa Groogan in Carntogher, in what is going to be one of the most tightly fought electoral contests in the upcoming council elections.

Firmly located in the sphere of left-republican politics, Paul has regularly been at the forefront of radical Irish politics and progressive campaigns since his early youth. He has held different positions in Sinn Féin’s northern leadership, including responsibility for the roll out of the party’s ’Uniting Ireland’ project.

Paul acted as a youthful press officer for the late Martin McGuinness during the historic 1997 Westminster election when Mr McGuinness was elected as MP for Mid-Ulster, beating the DUP’S William McCrea. Later that year, Paul was elected as a  member of  Magherafelt District Council, winning a second seat for the party in the Moyola DEA.

Having studied Modern European Politics at Ealing College, London before continuing his studies at NUI-Galway and Queen’s University Belfast, Paul has been instrumental in the establishment of the party’s European Department and political operations in Brussels and Strasbourg.  The committed republican, who is also an active member of Ireland’s leading trade union, SIPTU, has worked as a political advisor to Bairbre de Brún  and her successor as MEP, Martina Anderson as well as former MLAs Bronwyn McGahan and Ian Milne.

Over the past two years he has focused on managing the party’s very busy constituency service based in Gulladuff, ensuring first class representation at tribunals for many people living with disability and facing draconian changes to their benefits entitlement when faced with the introduction of Personal Independence Payment and Universal Credit.

Speaking to the County Derry Post after the close of nominations,  a seasoned observer of local politics said: “The late announcement that Paul Henry is to join the strong list of Sinn Féin candidates running for election in the Carntogher DEA should really not take anyone by surprise if they have been carefully watching local political developments over recent years.  Gabhán McFalone, who is positively recovering from a serious illness, put in a very impressive and strong performance as one of the republican party’s four candidates in this DEA during the last council elections, but only just failed to get elected in what were first time elections to the newly established council. Sinn Féin were always going to give this DEA strong attention and the selection of Paul Henry to return to front line electoral politics reflects this.

“There is no doubt that his appointment as manager off the party’s efficient constituency service which operates from Gulladuff, has cemented his political base and popularity. Being responsible for the roll out of a very impressive programme of events to mark the centenary of the 1916 Easter Rising across County Derry, has also aided his increased public profile.

“With excellent party activists being selected as local government candidates across the north, such as leading human rights solicitor, John Finucane in Belfast, and a former special advisor to agriculture and infrastructure ministers such as Derry’s Conor Heaney, the republican party is signalling its political focus and real intentions post-Brexit and in the run up to a referendum regarding Irish unity.”