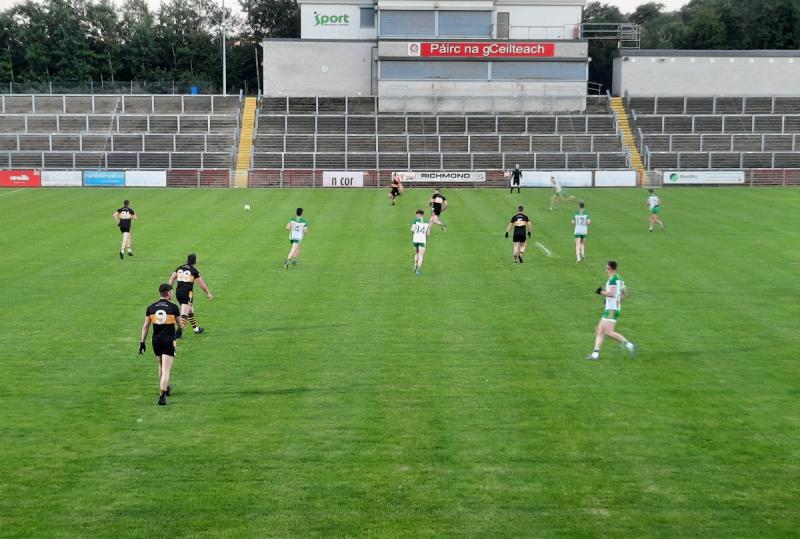 Desertmartin got off to a winning start against Doire Colmcille at Celtic Park.

Reigning champions Desertmartin got their 2021 championship campaign off to a winning start against Doire Colmcille at Celtic Park on Wednesday night.

A 46th minute goal from Lachlan Murray put this game to bed as Desertmartin eventually saw off the challenge of a brave Doire Colmcille side who hung in for long periods.

Desertmartin raced into an early seven-point lead, but needed their greater scoring threat to start their season with a win.

Eunan McElhennon scored the first score of this year's football championship after blasting to the net despite the best efforts of goalkeeper Nash, after 42 seconds, in a move started by Connor Shiels.

The champions played with Gregory McGovern as sweeper, but pushed right up on the Colmcille kick-out.

They had to wait until the fifth minute for their opening point, an Oran Kelly free he won himself. Desertmartin were wasteful in the opening half, but added frees from Kelly, Adie Trainor and Lachlan Murray to lead 1-4 to 0-0 after 13 minutes.

Doire Colmcille were playing with Damian Watson as sweeper at the other end. When Fergal McAnaney won a long Nash kick-out in the 14th minute he went on the run and Ciaran Curran's pass led to a point for Michael McCallion, who also tagged on a free to steady Colmcille at the water break, 1-4 to 0-2.

In a low-scoring third quarter, Desertmartin's red hot start was long gone and Doire Colmcille were more competitive in all sectors of the pitch, with Malachy Campbell's runs from defence causing problems. He went all the way through on one occasion and drew a free from sweeper Gregory McGovern.

Desertmartin manager Kevin O'Neill took Lachlan Murray to wing forward in an attempt to get him in the game, but Doire Colmcille were defending very well. With five minutes to half-time, Ryan McEldowney scored Desertmartin's first score from play for 25 minutes, putting them 1-6 to 0-3 ahead.

Desertmartin won the throw-in and once again Eunan McElhennon went on a surging run goalwards, but this time he was bottled up and Colmcille hit them on the counter-attack, Luke Clarke's pass put McCallion in for a sweet score.

Ryan Henry blazed over with a goal for the taking, but Colmcille hit back with a Ciaran Curran point after Nash's kick-out was won clean at midfield.

Murray and Malachy Campbell, both with their left feet, exchanged points as Desertmartin were 1-8 to 0-6 ahead, but it was Colmcille who had all the momentum.

The game became fragmented with a series of yellow cards from Damian Harkin.  Points from Ryan McElhennon and Ryan Henry put Desertmartin 1-10 to 0-6 ahead by the 45th minute, when they lost Eunan McElhennon to a black card.

This was followed by Desertmartin's second goal, a fine effort from an acute angle after his incisive run was the perfect score going into the water break.

Doire Colmcille did have the ball in the net shortly after, but it was disallowed after the umpire judged the initial high ball to have gone wide in the build-up.

Malachy Campbell raced forward to add a second point to cap off a fine performance as Colmcille kept battling right to the end.

It was Desertmartin, with a greater pep in their step who finished off with a fifth free of the night for Oran Kelly before Ryan McEldowney completed the scoring.

Desertmartin now travel to Ballerin in Round 2 with a chance to top their group. Doire Colmcille can take plenty of positives from the game and have made an improvement since their 4-16 to 1-7 defeat against the Martin's in the first game of the season.

Derry GAA championship games will be ticket only

No cash will be accepted at venues
ADVERTISEMENT - CONTINUE READING BELOW