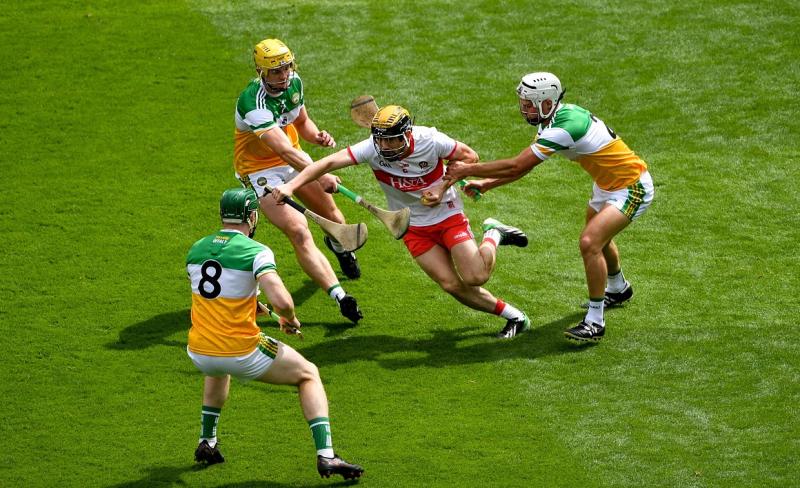 Derry aim to become the first Ulster winners of the Richie McElligott Cup when they take on Meath in Wednesday's All-Ireland U20 B Hurling Final.

After a facile win over neighbours Donegal and a battle with Sligo, the Oakleafers take on the Royals who are vying for their fourth title at this grade.

Kerry have won the title 10 times since it began in 1998 and have moved up to the A grade in Munster in the last two seasons, falling to Cork on both occasions.

The Kingdom defeated Derry in the 2018 decider. The competition was shelved last season due to Covid-19, but Down (2019) and Donegal (2004) are the only other Ulster sides to have reached the final hurdle with all three final defeats by Ulster counties coming by an average of 20 points.

Derry are managed by a trio of Kevin Kelly, Ryan O'Neill and Martin Birt, who have steered the county's U17 squad to the last three Celtic Challenge titles.

The Oakleafers will face their toughest test of the season against a Meath team who clocked up 4-24 in their quarter-final win over Wicklow and put 3-18 on their Ulster rivals Down in the semi-final.

Speaking to the County Derry Post, Derry selector Martin Birt is happy with the progress of hurling in the county on the back of their third Celtic Challenge win and the seniors reaching the Christy Ring Cup Final for the first time since 2015.

Nine of the 2018 U17 team are on board at U20 level, with Shea Cassidy, Leo Passmore,  Darragh McGilligan, Kosta Papachristopoulos, Pádhraig Nelis and Ryan McPeake the six players to have also played on the 2019 squad which supplies 14 players in total to the current U20 squad.

“We have three players (Michael Lynch, Ruaidhri McLaughlin and Jamie McCormick) who weren't on any of these teams, but have come back to the U20s and are pushing on, so that's a good sign,” Birt outlined.

“They might have been there at the very start, but they drifted away and it is good to see them back again.”

The Celtic Challenge and U20 B championship has been about developing players to maximise the playing pool moving into senior level.

“The wider the base of the triangle, the taller you can build it,” Birt stresses. “Things are going well, we are happy enough and there is a good representation from all the clubs.

“We have won the Celtic Challenge, the seniors were in the Christy Ring Final and we are in the U20 B final, so everything in Derry hurling is on a positive curve.”

Eight of the senior team that started against Offaly hail from county champions Slaughtneil, with four coming from challengers Kevin Lynch's and Birt acknowledges a need to cast the net wider for the 'long-term' health of hurling in the county.

“You need as many clubs as possible. There are eight clubs in our U20 squad and it is not dominated by one club.

“We are happy enough and the lads coming through from the Celtic Challenge, they know what is involved in it. It is a good development and I'm glad to see four lads in with the seniors to experience what it is all about.

“It is the clubs who have put in all the work with these boys since they were five or six. It is a great credit to them for the development and they are stepping up in terms of the county commitments.”

Birt reveals that there has always been a 'discussion' about following Antrim into the Leinster championship, but at the start of the season there was even a doubt over any fixtures going ahead due to the uncertainty surrounding Covid.

“The Celtic Challenge is definitely the way to go, in terms of development and we'd be big fans of it,” added Birt, pointing at how the group stages in previous years allowed the management to run their eyes over the entire panel.

“We have always said to them that they'd be playing with their clubs and I don't know if that would be the case in these other competitions (in Leinster) and we are out with them once a week,” he points out.

“You can see the way Kerry has used it (U20 B grade) with a small number of clubs in the north of the county and there is a pathway to do that. They have set up a template with the structures to follow.”

The U20 management have spent the last few weeks crossing their fingers for a full bill of health from the rounds of senior league action.

Ballinascreen's Aodhan O'Hagan has been struggling with a shoulder injury, but is expected to come through in time.

Michael Lynch and Eoin McCallion (both with hamstring injuries) are ruled out, with Michael McCormack's red card from the semi-final win over Sligo will keeping him out. Otherwise, Birt was reporting a full squad to select from.

The Oakleafers face Meath in Wednesday's All-Ireland B Final