The sides meet in Wednesday's decider in Páirc Esler 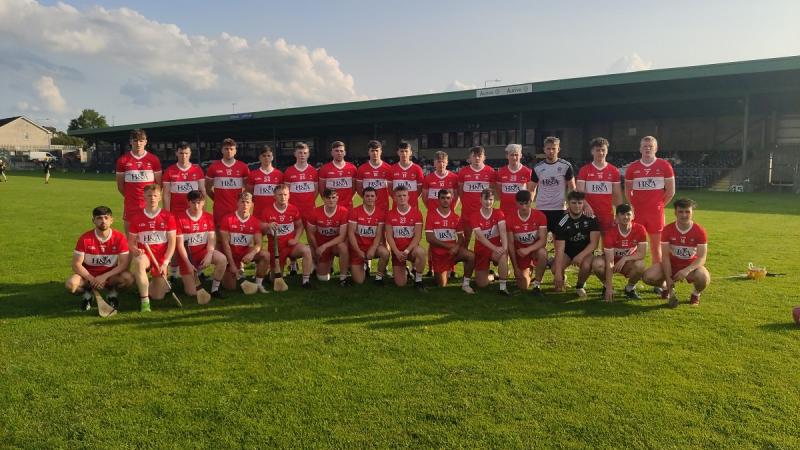 The Derry squad pictured before their semi-final win over Sligo

If Derry are to take the Richie McElligott Cup to Ulster for the first time, they must mix their own game with taming a Meath attack that have shot their way to Wednesday's decider.

The counties met in the 2018 Celtic Challenge Quarter-Final, but only Jack Lanigan remains from the side Derry put to the sword that afternoon in Inniskeen.

Trim's James Murray, on his home pitch, hit 2-12 as Peter Durnin's side clocked up a 4-24 to 1-13 win over Wicklow in the Quarter-Finals, despite being taken off at the second water break with the result in the bag.

Corner forward Jack Cottrel and substitute Brian Moore – with the last puck of the game - also finding the net for Meath.

Meath outscored Down by 2-8 to 1-2 after the second half water break of their Semi-Final, but were without Murray who was carried off after a collision early in the game.

Thankfully, for Meath, they had Jack Lanigan to fall back on and his 1-9 tally – including a goal from a sideline – helped them to victory.

The Royals led by 1-7 to 0-6 at the break thanks to Jack Cottrell's goal. Down came out all guns blazing after the restart and were rewarded for their efforts when Stuart Martin’s sideline went all the way past Conor Ryan and into the Meath net.

They outscored the men in green by 1-5 to 0-3 before the second half water break to leave them a point to the good with 15 minutes to go.  The Royals responded with their late blitz to book their final spot.

With a combined total of 1-15 from Shea Cassidy, Darragh McGilligan, Pádhraig Nelis and Padraig O'Kane, Derry were comfortable winners (1-22 to 0-4) over neighbours Donegal in their Quarter-Final before their battle with Sligo on the last four.

The Oakleafers lost Michael McCormack to a red card in the opening seconds in Markievicz Park.

Derry got off to a great start and were heading into the interval in the lead thanks to Shea Cassidy's goal, but the home side levelled matters (1-8 each) at the break.

Skipper Eoghan Cassidy hit a fine score early in the second-half before Padraig O'Kane powered through the Sligo defence to score a magical individual goal. Darragh McGilligan was also on target as Derry ran out 2-19 to 1-15 winners.