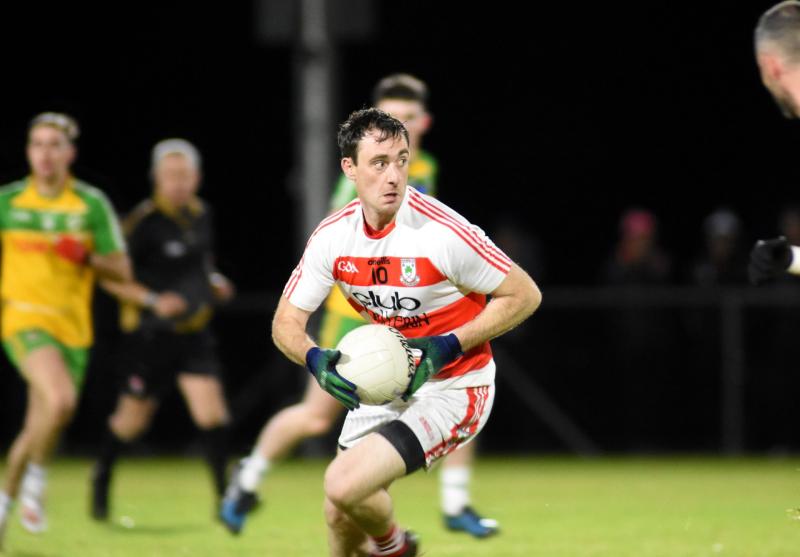 Ballerin kept their winning run on Friday night with victory away to Doire Trasna.

Ballerin 0-13
Doire Trasna 0-10
All the excitement in this mistake ridden encounter was packed into the last five minutes.

Ballerin were three points in front when they were awarded a penalty, after a foul on Eugene Mullan

Doire Trasna goalkeeper Martin Healey, whose long and accurate kick-outs had been a feature of the game, made an excellent save from Gary Keane’s effort.

Eugene Mullan then tagged on a point to make it a safe looking four-point lead for the visitors.

Damien Starrett, who had come off the bench for the injured Colm McFadden in the first-half, sent over a

free from a tight angle on the left.

As the home team, on their fine new premises overlooking the city, sensed a possible victory, Micheál McNaught, with the last kick of the game saw his fierce drive come off an upright to the relief of the league leaders.

The already depleted Ballerin team were further hampered when Paul Keane and Shane McIntyre got the dreaded flat tyre and arrived too late to start the game.

Then after 20 minutes, Anntoin Bradley was on his way to the nearby Altnagelvin hospital with a suspected Achilles injury.

Ballerin on, the other hand must have been relieved that Trasna top scorer Eoghan Quigg was not in the home  attack.

At the three quarter stage a free from Starrett left just a point between them but the winners had just about enough in hand for their tenth league victory in eleven games.

Craigbane had just come out of their 2-week isolation period.