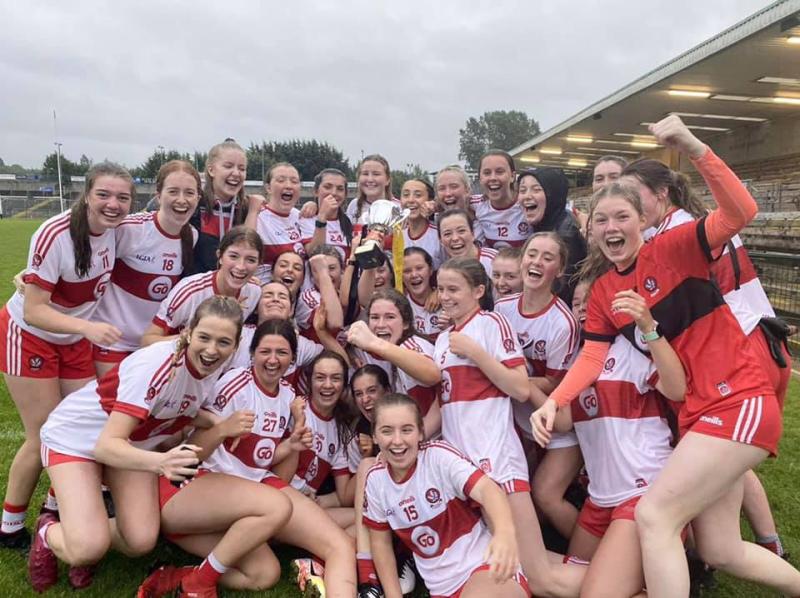 Derry Ladies made it two Ulster titles in five days with victory over Fermanagh in Wednesday's Ulster Minor Silver Final at Brewster Park.

A powerful second quarter paved Derry's way back into Wednesday night's final and gave them a platform to lift a second Ulster title in five days at a rainswept Brewster Park on Wednesday night.

After Saturday's win for the U16 squad, Derry minors dug deep to cap off a promising season with silverware to give the county a much needed boost.

Trailing 2-5 to 0-2 at the first water break, Paul Simpson's side hit an unanswered 2-3 tally to leave themselves back in contention.

While their U16 counterparts controlled their final from start to finish, the minors showed tremendous resolve to overturn a nine-point deficit and come out the other side. And it was a just reward for their promise in the group stages.

In Round 1, they enjoyed much of the play before going down to Donegal by three points and fell short after taking Tyrone to extra-time.

Attacking duo Orlagh O'Kane and Orla McGeogh scored 2-10 between them in a performance laced with character against a Fermanagh side that brought so much to the table.

The game was played in the right spirit was tainted by a double sending off with eight minutes to go. After an altercation between Erin Tierney and Megan McGill, where there was minimal contact, the referee sent both players off on straight red cards after consultation with her linesman.

Fermanagh captain Ashling Keenan and Aoife McCabe were both central to their opening score. After Keelan Murphy gained possession from a Derry kick-out the move ended with Murphy slotting to the net from close range.

Orlagh O'Kane replied with a point but the Derry net was bulging again in the fifth minute. Fermanagh senior player Shanna Cassidy cut along the end-line and Megan McGill's foot-block resulted in a penalty and up stepped Erin Tierney to slot home and the Erne side were 2-1 to 0-1 ahead.

O'Kane replied with a free for Derry, but the home side bossed the rest of the opening quarter. Tierney (3) and Keelan Murphy helped them into a 2-5 to 0-2, with McCabe's direct running doing most of the damage.

An Orlagh O'Kane free was Derry's first score 11 minutes, but their next score was a significant changing of the guard. With 19 minutes gone, Derry senior star Orla McGeogh won a kick-out and was fouled. O'Kane's free dropped short, but Kate Higgins got a fist to the ball and diverted it to the bottom corner of the net despite the best efforts of Chloe Hamilton in the Fermanagh goal.

It was a seismic lift for Derry, who had Rachel Keenan now picking up Aoife McCabe and beginning to curb her influence. The Oakleafers tagged on two O'Kane scores, the second after a McGeogh tackle, and the game was on the turn.

It got even better for the visitors three minutes before half-time. Kate Higgins won a kick-out and when McGeogh's vision kicked in, she sprayed an inch-perfect pass to the far post where Clodagh Moore finished the move to net and the sides were level, 2-5 each, at half-time.

Derry went on the front foot from the throw-in and Moore passed to Orlagh O'Kane who had her shot tipped over the bar by goalkeeper Hamilton and Derry were ahead for the first time in the game.

Two McGeogh frees from a resurgent Derry opened a 2-8 to 2-5 lead as the game took on a life of its own. Ciara McNally won another Fermanagh kick-out, but she had the composure to pick out McGeogh who slotted home a third Derry goal from close-range and they were on their way to victory. Or so they thought. Fermanagh had no intention of rolling over.

Three minutes later Keelan Murphy won a tackle after a foul by Anna McDaid and Tierney slotted her second penalty of the game, cutting the gap to three points – 3-8 to 3-5 with 23 minutes remaining.

Fermanagh, with substitute Grainger looking likely, added two more points by the end of the third quarter. Trailing 3-10 to 3-7, they failed to score for the rest of the game.

A Rachel Keenan block thwarted a Fermanagh attack and earlier in the half Anna McDaid made a vital interception to prevent a goal chance as the game began to change.

With three minutes to go, Derry grabbed their fourth goal to seal the game. Kate Higgins started the move with a free in defence. Lucy O'Kane won a loose ball at midfield and soon Clodagh Moore was on her way goalwards. Orla McGeogh took possession and after taking a return pass from O'Kane, she made no mistake from close-range and Derry were on their way to victory.

POLL: Derry minors won the Ulster minor title...who was your player of the match?